Living the Sermon on the Mount, Transforming American Culture 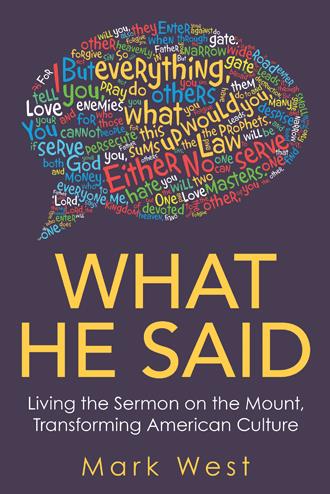 My Dad warned me not to eat too many of the olives. In case you’re wondering, I readily ignored his instruction and dove in. Olive after olive. Handful over handful. Before I realized it, I had eaten more than half the jar. My Dad was angry!

I was scolded. A fair sentence for my disrespectful disobedience. I respected his authority over my young life. That was my just punishment.

In less than an hour the consequences arrived.

Let’s just say the consequences were of the projectile nature and leave it right there.

This stuck with me because it taught me two things about authority, one memorable and the other of utmost importance.

First, I learned that those in authority could punish me. That was memorable. Punishment isn’t fun.

Second, I learned that some authority is designed for my well-being. That was of utmost importance.

I’m starting here because that is why this book is important.

What He said matters because Jesus had authority.

He exercises His authority, not for our punishment, but instead for our best.

He said so Himself.

What is the American way?

Do we find it in our national anthems, pledges, or movements?

Or is it something we see displayed in how we deal with each other?

Would we find the same answer in the deep south and the far west, in the country, suburbia, and the city?

Or would we be remiss to trudge, even if done lightly upon the traditions that make each of our regions unique and special?

I believe the common denominator is found in in a phrase.

Most of us recognize that refrain. It underpins most of what we do. That phrase opens the governing legal document of our nation, the Constitution.

Those three words demonstrate the highest legal authority in our nation. By those three words the Constitution was authorized to create the world’s first land to be governed by the rule of law.

“We the People” authorize the rule of law.

America isn’t ruled by the President, Congress, or the Judiciary. Our nation is ruled by the law that was authorized by “We the People.” When the law of the land is concerned, the author is in control. Original intent is key to determining what a law should or shouldn’t mean.

That is the American way.

“We the People” rule by law.

“We the People” authorize representatives to write that law, enforce that law, and judge that law.

“We the People” are the American authority.

Our authority flows, in paths of both elegance and vigor, through various frameworks. However, authority in our nation is underlined by those three inescapable and undeniable words.

American culture is an authority as well, sending us a message contrary to our faith. American culture, by nature, is adversarial to those who live by faith in Christ. Those three simple words that open the Constitution legally establish the adversarial nature of this relationship.

“Me-First” is what “We the People” means when extended to its logical conclusion. #WhatHeSaid

OK. You see the hashtag. Let’s have this dialogue. Please take a moment to share your thoughts on this using #WhatHeSaid

This reminds me of a frightening experience I had when my oldest son was a toddler.

I wish I could remember the prevailing circumstance, but I don’t.

American culture is adversarial to the teachings Jesus Christ laid out in the Sermon on the Mount. The pace of modern living challenges us to embrace a cultural understanding of our faith that is absent of the life Christ taught. In these pages you will find the necessary reminder about the importance of what Jesus said and how living His words should look in our culture. National reawakening must begin with individual reawakening. We hope to begin a new Christian lifestyle that is centered on Christ’s power that enables us to live simply by what He said in the Sermon on the Mount.

Mark West has served as a bi-vocational pastor in rural churches for 15 years. He’s been married for 24 years and is the father of three children. He’s uniquely equipped for balancing life between full-time work and full-time ministry.