The 12 Commandments of Socialism 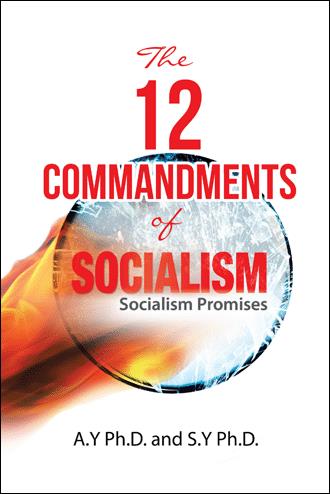 How can we say the truth? Truth must be redefined here. In socialist countries, when we praise the socialist ideology, the great leaders and their great works even though we are forced to do so, and that is the truth.

But when we talk anything negative about socialist ideology and their wrongdoings, then that is not the truth. When we talk about their weaknesses, failures, misuses of power, inhumane treatments, gap between the rich and the poor, corruptions, injustices, persecutions and oppressions, which are really happening, then those are not the truth but “lies”, and those “lies” must be punished severely.

Hundreds of thousands of those who spoke or spread those “lies” have been incarcerated, beaten, and tortured severely. Many could not endure tortures and died, others were beaten to death, and many just simply disappeared. Those who are still alive have been reeducated in horrible prisons and labor camps so that when they are out of prisons, they would perfectly speak “truth” not “lies” anymore.

Uncle George was put in prison for almost 17 full years. He was only 30 years old when he was brought to the secretive labor camp and prison in the far and deep mountains of the north. In his prison there were about 300 prisoners who were mostly the officials of the former government just as he was. None of them went through court trials and they were there for their dying days as lifetime prisoners.

There were other prison camps nearby as prisoners could see some other camps from their place, but no one knew how many camps and how many people were put behind the bars in total. They were mostly from the south and they were placed in the north so that they could hardly find ways or connection to make escapes possible. They were there to suffer the cold weather, hard labors and poor living conditions.

They were there for their death sentences. Most of them could not make it alive due to the hard labors and exhaustions. Others died because of the malaria and all kinds of sicknesses and diseases. Some were executed and the rest died because of severe tortures, harsh weather and hungers. Others committed suicides in frustrations. Their lives were only valuable as long as they had strength to do the hard labors.

They were mostly the talents of the nation and now they were sufferings hell on earth. Early in the morning they were brought to the labor camps and went back late in the evening. They were fully surrounded with armed solders. After dinner they had to attend the “Political Class” or “Political Meeting” where they listened to the great theories and marvelous things of socialism as long as they were still alive.

After the “Political Class,” then it came the discussion time and the prisoners were asked almost the same few questions from days to years about the greatness of socialism and the equality, freedom, and happiness. For years, the prisoners had to recite all the great freedom, great treatment and great prosperity yet they knew well in their hearts, minds and experiences, those things were impossible.

How was it possible for great freedom when they were still the prisoners who were under strict control and heavily guarded? How was it possible for great prosperity when the majority could hardly survive the hunger? But for the sake of life they had to pretend and speak “the truth” that was against their consciences, belief and reality. They must lie against their will so they could survive each day.

For 16 years and 9 months, uncle George miraculously survived the malaria, various types of sicknesses and diseases, harsh weather, cruel treatments, hard labor, loneliness, loss of all freedom and human rights, and all the political tests. At least he still had the right to live so he ate everything possible to survive from crickets to grasshoppers and rats, the luxurious meals of the prisoners in egalitarian societies.

People came and died in his prison, he was among the rare prisoners who survived the test of horrible prisons for such a long time. He would have died in the prison and not many people would remember about him. But at last, he was allowed to leave his poverty, inhuman treatment, pains, bondage, and humiliation to a better place not by the socialists who promised equality, freedom and peace.

He was petitioned by the international agency; and he was released from his long-year miseries and nightmares with a ransom paid by the agency. He was treated like an animal with socialists who promised great equality. The remaining prisoners and he were sold like objects by the socialists who said they fought for the well-beings of people but they were and are the ones who made people suffer and die.

I asked him, “Why didn’t you leave the country in those days?” He said, “I was not able to find my mother and my sisters and I could not just leave them behind.” I was almost cried at his answer. He paid a great price as a filial son. He suffered greatly for the love and care to his mother and sisters. Any great ideology could punish such a great man who cared not about his security but the well being of his mother?

The ally sent helicopter to pick him up, every time the helicopter came he gave chances to other people and Catholic priests who came and asked him to allow them to go. But he could not go and he just waited and hoped for the coming of his mother and sisters who was scattered everywhere as the new armies entered and invaded the city. Yet, his love for his mother cost him much and almost his life.

His hope was dashed when the policemen surrounded his home. His dream was cut short when the policemen handcuffed him. His desire to care for his mother and the siblings was diminished when they threw him into their truck. His life was rocky and uncertain as he was transported through the many rocky roads for days. His future was dim as they put a blindfold on his eyes and led him to unknown

The 12 Commandments of Socialism is an in-depth description of the reality of life and the reality of socialism in socialist countries. It proves the limited freedom and serious violations of human rights. It presents how freedom is exercised with the limited accesses to Free Press, Free Speech, Free Assembly, Free Trials By Jury, Free Travel, Free Votes and Free Social Benefits

The 12 Commandments of Socialism also leads the readers to the enlightenment and the fact that the socialist egalitarian utopia has never become a reality in any country that had and has been applying socialism in more than one century of its existence. Socialism indeed delivers so many injustices, sufferings, inequalities, suppressions, poverty and deaths.

The 12 Commandments of Socialism is not a speculation or theory but it is well supported with many true stories of socialist victims. These victims faced either the life-long imprisonment and hard labor camps for 10 years to 30 years or the execution of their lives and the endless sufferings of their family members. Millions of people were starved or run their exodus from the socialist regimes.

The 12 Commandments of Socialism is also a great philosophical and religious discussion of many areas of life and value. Thus is it not only a great book for reading but also for reflections and refreshments. It is also a touching and inspiring book for a must-to-read book

Dr. A. Y. was a former university professor who was called to preach the Gospels to the nations as a Healing Evangelist. He is an anointed speaker for revival, leadership and mission conferences. He is also the organizer and speaker of many crusades, leadership, missions and revival conference. He is the Founder and President of underground Seminary, Missions organization, and TV Ministry.

Dr. S.Y is a university professor and the overseer of many home-church ministries. She is gifted with prophetic words and she is called to minister to families for inner healing, restoration and family devotion. She is mightily used by God to inspire and challenges many believers for missions through her many experiences of persecutions.