Go Back With Me

A Nostalgic Recall of Early 1940 Life in West Virginia 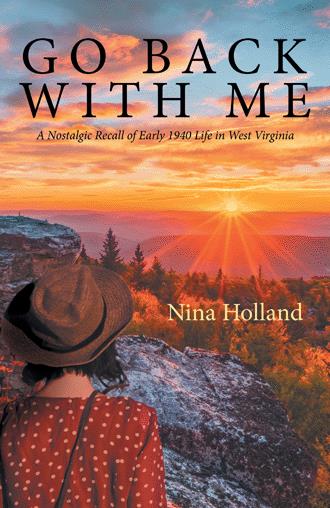 Blue had hit the nail on the head. Maggie was afraid of water. She started to deny it, but Maggie remembered she was a different person now, so just told Blue the truth. She explained how she had come near drowning as a child and had never gotten over her fear of water. “ It’s okay, Aunt Maggie,” comforted blue, “I have an idea that might help you. Me and Stout will show you just how it’s done so there won’t be any surprises.”

A while later, Maggie, Blue and Stout made their way down to the creek and to an area where the water was deepest. Blue instructed Maggie to set on a nice smooth rock and watch the ceremony. She assured Maggie that there was absolutely nothing to be afraid of and she and Stout would show her, step by step, how the baptism would proceed.

First Blue stood on the bank and solemnly sang a few lines of “On Jordan's Stormy Banks I stand,” just like she had heard the folks of Fancy Knoll sing at their baptisms. She then proceeded to put a white dish towel around Stout’s neck using a safety pin to fasten it. She explained to Maggie that she had seen some of the folks wearing long white robes to be baptized in, which she herself preferred. The large handmade dish towel almost covered Stout and would work as a robe. Stout was excited about the affair and gave Blue some problems holding him still, but he did allow her to lead him out into the water. To be safe she held him tightly by his makeshift collar. He had been used to playing along the edge of the creek with Blue, so went happily, although rather hesitantly.

Blue talked soothingly to him about what she was going to do and assured him she would not let him drown. She had him stand up with his front paws on her chest, just like he always did. She had to dodge his wet kisses, so felt the need to hurry and dunk him. Since she had never been able to hear the few words the preacher man spoke just before taking the person under, she just laid her hand on Stout’s head and began to lower him backwards--and that was her undoing. Stout went wild! He must have realized what was about to happen because he lunged sideways taking Blue with him, dunking her under instead. He then heaved himself out of the water, stopping only long enough to shake the water out of his heavy fur right beside Maggie, who was crawling backwards trying to get herself out of range. He shot past her and was out of sight before Blue could upright herself out of the water.

An angler further down the creek related the story later that he had heard a loud howling laughter and had hurried to see where it was coming from. There was Maggie Snow sitting on a rock, wet from head to toe, laughing so hard she couldn't stand and when she looked towards Blue her laughter got worse. Blue was sitting high on the bank looking like a drowned rat just watching her with eyes as big as saucers. Blue herself had never heard Maggie laugh before and if the truth be known Maggie Snow had not laughed that hard in years. She didn’t know when she had felt so good!

A short time later, Blue returned home to find Stout lying far back against the wall behind the rocking chair. Nothing could coax him out. She apologized profusely, but Stout wasn’t budging from his spot. Finally, to show her remorse she gave him a biscuit covered with gravy and a big piece of fat back bacon on top and left it by the chair. The house got quiet before Stout hesitantly crawled from under the rocker and gobbled down his peace offering. His baptismal gown got in his way a bit, but he managed, before snuggling back beneath the chair.

Magdalene Snow is a bitter, middle-aged women. When riled, she is thought to likely shoot her rifle at animals and people alike. She leads a solitary life and wants nothing more than to be left alone in her self-imposed exile. She speaks to no one and scorns any overtures from local residents who come too near her small cabin. She came to Birch Mountain to escape an abusive husband and her only desire is for security and solitude. However, what she finds is something quite different. A small child named, Blue, determines to enter into Maggie’s world with, or without, an invitation. She is persistent and fearless in her maneuvers to get acquainted with any newcomers. In the beginning Maggie determinedly resists the overtures of the troublesome little girl, but over time she is won over and discovers a joyous life which she never knew existed. She gradually finds great peace and acceptance in dwelling on that same mountain for the remainder of her days. In fact, her great desire to be alone when she first arrives on Birch Mountain, comes to pass only after she has grown old. Due to progress, the people of her world have either moved away, or passed away. In the late 1940’s the community in the foothills called Fancy Knoll, ceases to be, and Maggie alone remains. As a tribute to Blue, she sets her mind to write the stories of the local people who have lived in the area, either as she shared them herself, or as they were told to her. These are the stories of one community and are written to preserve the lives and culture for a future generation. Maggie’s tales are the stories of the people of Fancy Knoll.

This book is a collection of simple stories written in the vernacular of the Appalachian region during the late 1930’s and the early 1940’s. Although written as fiction, every chapter has a person or event reminiscent of the author’s own life. The author was raised in West Virginia and now, as a widow, she lives a quiet life in Idaho near four of her six children. The years have taken her many places away from the hills of her home state. She was born with a desire for learning new things, but the fulfillment of that desire came only at fifty years of age--and after the birth of 7 children. She became a nurse and later attended Bible college. In 1998, after a seven year stay in the Philippines as a Baptist missionary, she returned to Indiana for a time before a desire to return to the hills became irresistible. On her return to the Appalachian area she continued to work and live in the same community she grew up in. However, due to her age, and an opportunity for a home in Idaho, she left the area of her childhood for good and settled into, perhaps, her last move. She continues to call West Virginia home, however, and states that her early years in the hills were the most endearing and uncomplicated times of her life, plus a remarkable era to be born into. Her enjoyment of her early years is greatly contributed to the church as being the center of most communities and the sharing of the same values-- if not the same preferences. She states that the memories of those days are like shadows who hide from the sun, trailing her wherever she turns. “I both lived them and sometimes I long for them.”