Events, People, and Circumstances Divinely Choreographed by God for My Appointed Time of Salvation 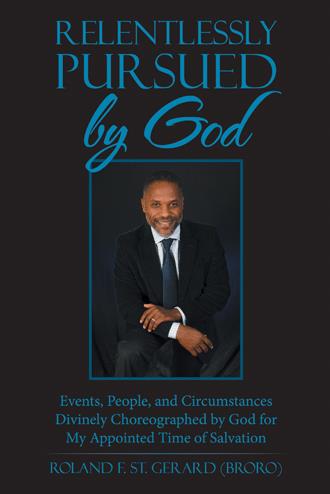 When I got a bit older, I observed another voodoo ceremony. I did not have a thorough knowledge of the tradition and the activities, but I guess I was intrigued by the songs, the drum, and the participants’ con_ dent outlook while engaged in that service. Since I was not a Christian and did not grow up in church, I regarded these events as regular cultural events, like throwing a party, which people tend to

do. Overall, I did not identify with any particular religion, although my family professed the Catholic faith.

If the Lord had not pursued me when He did, I would still be out in the world as a DJ, an artist, or something worse. Look what God has done! I am now a dynamic and anointed preacher, a life coach, and a writer. I preach and teach the whole counsel of the Word of God to help instill a thorough comprehension of the revealed mysteries of the kingdom of God. I conduct live and online conferences and workshops on prayer, faith, mind renewal (what some refer to as “kingdom paradigm”), and the Christian lifestyle.

When I encounter some of my former friends, fans, and foes, their reaction is, “If God can save you, then He can save me too.” In hearing those words, on the one hand, I rejoice, knowing that God can use my life as an example of what He’s willing to do for others. On the other hand, it makes me wonder about how naughty I must have been. Their remarks cause me to think back to determine what I was doing that was so awful. And they were right: I was terrible. I used to cuss, smoke, drink, sleep with countless women, and live an aimless life as if I was a vagabond.

Maybe this is not a story “From rags to riches?” But, where I came from piritually, socially, and even materially to get to where I am today as a preacher, teacher, life coach, and author, you might as well say I have been resurrected by the resurrection power of the Lord Jesus Christ.

They did not see that coming. I got to the radio station, where for the past months, I had been the one controlling the board to open the six-hour daily radio program and to put other presenters on the air. When I got to the radio station on that rainy day in the beautiful sunshine state, the staff got the news they never thought they would have heard from me in a thousand years. I told the on-site manager and others that were present that, I would not be playing secular music (Compas, reggae, calypso) any longer but only Christian music, because I have accepted Jesus as my Savior. That was a shocker. What? Cool C, playing only Christian music? That’s unheard of.

Working with owners and the staff of that community radio program was a great privilege. At that time, I only had a high school level education, and both the managers and presenters were the public intellectuals of the community at that time. I appreciated the fact that the president of the company and others gave me that opportunity. In my then world, it was a prestigious position. However, my God came for me. And the greatest prestige is that which is found in answering the call of the Creator and King of the universe.

However, since I used to smoke marijuana, some of the staff and others thought, I might have gone crazy. Maybe I did too much of the smoking. So now I have gone religious on them. My colleagues could not believe it, my night club friends and fans could not either, and those who listen to me on the radio went into a shock. Because, since I was an on- air person, my conversion was a public event, although, as you will discover, it was first a very private matter between God and me.

Almost three decades later, I am now still being kept by the grace and faithfulness of God. I continue to share Christ with the lost and teach believers the word of God. Moreover, ministering the Gospel of the Lord Jesus Christ to help foster transformation in others is firstly beneficial for me. For, as a preacher, I get to prepare sermons just about every week. It is unquestionably more desirous than the prestige I had enjoyed in the world. With this new relationship with the Lord Jesus and walking in the vocation to which He called me, I get to preach at various churches, share principles of God’s kingdom on the radio. I teach biblical truths at conferences and revival services. This line of work demands that I research multiple books and other external informative sources for adequate preparation. Ultimately, I get to rejoice greatly, seeing how my preaching and teaching significantly impact people’s lives. It is eternally gratifying.

My earliest memory of the events of my life goes back to my toddler years. From there, life seemed to have begun to scurry for me. I started to get drunk as a young boy, experienced sexual activities by my initiation, and, in my older years as a teenager and young adult, I experienced marijuana smoking.

Relentlessly Pursued by God is the story of the pursuit of God that transformed a drunken, purposeless boy growing up on the backside of a little town in northwest Haiti to have become now a pastor, preacher, and life-changer in the United States. You will follow the pursuit from my baby years through the developmental years, to the life and destiny threatening years, until we reached to where the chase ended. Then, again, to begin a new lease in life, only with a better perspective.

Roland F. St. Gerard, left behind in Haiti by his parents at the age of four, began drinking hardcore liquor at age six.

It didn’t take too long for him to start having sex and smoking cigarettes. Even after he was reunited with his mom in the United States at age twelve, he began to smoke marijuana.

But today, Roland is a pastor, preacher, conference speaker, and writer proclaiming the truths of the Gospel of Jesus Christ. In this book, he shares how he went from growing up in his childhood years without his parents to a man of God, preaching the Gospel of Christ.

As you read, you will appreciate how the Holy Spirit was vividly active in employing people and circumstances, and even angels to get Roland to become aware of His saving grace—and how God can work miracles in anyone’s life.

Get ready to be inspired, laugh, cry, and be infused by the wonder-working power of God as you follow the life of Roland from his toddler years to the present.

To God, be all the glory!

Roland F. St. Gerard is a preacher, conference speaker, and writer. He and his wife, Kathleen, publish the MCE Magazine (mcemagazine.org) and broadcast a faith-building radio show aired on various radio stations in South Florida. Roland holds an AA degree in general education from Miami Dade College, an AA in theology from Life Christian University, a BA in psychology from Trinity International University. At the writing of this book, he is working toward a master’s in divinity degree at Liberty University Online.