Your Maker-made material that was worth the saving. 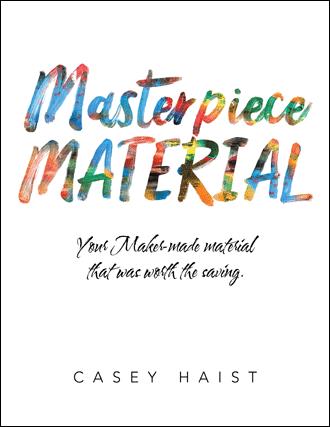 God only creates the good stuff. Sends the good stuff to our door (there has GOT to be free two day shipping in heaven). He doesn’t shop for the cheap imitation stuff; He creates His own brand. He records the exact description of His work so there isn’t any confusion. He wants nothing in return except to be seen for who He is. His true character. (Ever felt misunderstood? Yeah, me too.) He waits and anticipates that His masterpiece would allow Him to illuminate it within the darkness. So it can be seen, loved, and fully known for what it is. His. His sons and daughters even come with an instruction manual if you’re interested. But the Maker doesn’t force you to read it. Part of the design includes the freedom to choose Him as our guide, or give it a go on our own.

You’re His Beloved. His Beloved masterpiece. Your heart is so precious and fragile to Him because He knows the peace and the belonging it needs in Him, the One who made it. Jesus died for you. Do you know what that means? It means you were WORTH the price that He paid. God bought back your freedom to choose death or choose life because He’s an Artist who won’t give up on His work and won’t leave it to be forgotten. You know what else it means?

It means you contain SO much value.

He’s the One who designed the world and before it was “very good,” He breathed us into existence. He not only wanted the birds and the mountains and the stars in the sky. He wanted you. You and I are the icing on God’s cake of creation. The living, breathing, walking-around, homemade kind of icing. The kind He really spent time on, knitted together, mixed together with a purpose, with a plan of making us the best, (very best) part. His creation of the world just wasn’t complete without us.

You see, God doesn’t need us. He wants us. He chose us from the very beginning. He’ll never stop pursuing His design in you because He knows the worth of His work. He knows the time spent, the years in which He dreamt of you before your existence. He remembers every stroke of the brush and the perfect pressure upon the clay. He knows you so well that He could never walk away. There’s a part of Himself that He sees in you. In fact, this Creator sacrificed His Son in a quest to save His work. It was the only way.

Let's remember who God is and be reminded together what that means for us. There's a journey ahead of unlocking the masterpiece within us that so desperately wants to be set free. Let's walk through each chapter like we've met at your favorite coffee spot and remind ourselves of our worth, our value, and why it makes sense that we were always meant to live in the light.

Casey Haist is a mom of two crazy amazing boys and has been married for 14 years to her favorite person, Bryant. Casey is an identity and creativity advocate, worship leader, clay jewelry maker, abstract painter, and rainbow chaser. She inspires others to see the masterpiece in the mirror. She creatively communicates God’s truth through writing, expressive art, song and speaking. Casey has helped create vision and atmosphere for local Chosen women’s events and special gatherings, blazing a path of inspiration and encouraging others to step boldly into who God created them to be.