Dying Is Not An Option

Overcoming Obstacles beyond Your Control 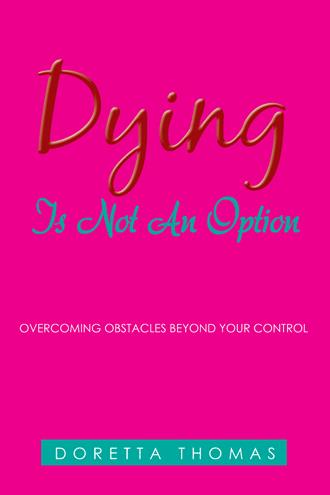 Life’s inconveniences can often lead to seasons of discouragement that can linger for what seems like an eternity. Perhaps you have experienced challenges that were the result of a broken relationship, an unexpected health diagnosis, the loss of a loved one, financial hardship, or other issues that were totally out of your control. Whatever the case, the truth is that unexpected things happen. People get stuck and become discouraged, and life changes as a result. Try as we may to be positive or to exercise mountain-moving faith, some circumstances shake us to the core, and life as we once knew it is never the same again.
In the book, I will share with you some of the most trying storms that I have faced as a mother, woman, and cancer survivor. I am convinced that with every unexpected twist and turn life throws at us, we become more resilient. It is my hope that despite the life altering events you have encountered thus far, you will find the courage to see your life through a new set of lenses and thrive.
You must believe that you too are a survivor and dying is not an option!

Doretta Thomas has been an Insurance Agent for ten years and is the founder of Ladies Leaving Legacies, organization which teaches women how to leave a legacy through life insurance products. As a cancer survivor she knows from personal experience what it means to be prepared for life’s unexpected challenges. Doretta is a Professional Advisory Committee Member with The Arizona Foundation For Women which is near and dear to her heart. Doretta is an empowerment and inspirational speaker but her greatest accomplishment is being mother of five sons, four granddaughters and two grandsons. She currently lives in Phoenix, Arizona.