Of Such Is the Kingdom

A Novel of Biblical Times in Three Parts 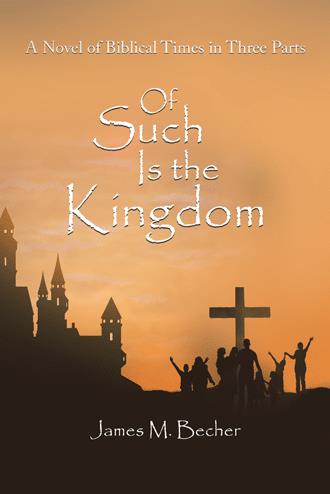 It had been a long, tiresome trip and a trying search. The city of Jerusalem was a teeming metropolis, alive with people from all walks of life. Surely here, he thought, he would find the type of man he was looking for. Surely, there was at least one man in Jerusalem with insight, drive, and motivation, who could be inspired and trained to lead a small insurrection. ….

The day had been long, and he was hot and tired—tired of standing over the scorching fire all day, making plane plates and kitchen knives. He'd had few calls that week for the fancy plates and shields he so liked to make. If only he were rich like that cloth shop owner. . . . Perhaps, he should try raising his prices and cutting corners. He did want his family to enjoy the best. But it was the Romans who really bothered him. They'd take every shekel you made in taxes if they could. And what do they do with it all? He wondered. This city could certainly stand some improvements. But any improvements we hear of never seem t' reach us here. They don't care for our people. They'd kill you if they got a chance, just like they did my grandfather. After he’d given them his best efforts, they’d turned on him and crucified him, along with the Spartan captives on the Appian way. Although Barabbas was only 12 years old, and that was over 40 years ago, he would despise them forever for that. They're all tyrants, he thought, and murderers at heart! And the local rulers aren't any better! There's that putrid puppet, Pilate, always bowing and scraping to that Cyclops, Caesar, and his hired helper, Herod! Everyone knows they add to the taxes they're required by Rome to collect in order to fill their own coffers. Laws are passed for their political expediency rather than for the good they might do. And then there are those Roman soldiers, always parading up and down. They've even added a tax of their own, supposedly for their upkeep. Yes, things are truly in a terrible state!

All these thoughts were running wildly through his mind that afternoon, when the door opened, and in walked one of them, a Roman soldier in the flesh. He cringed. The unwelcome visitor inquired about the sword hanging on the back wall, but when told the price, declined to buy it, saying, “I'll wait until the next increase in the soldier's tax. There is another half-shekel raise scheduled, you know.” —As if it wasn't high enough already! The smith nodded patronizingly, though all the while something inside of him wanted to take the down sword and thrust it into the soldier's back as he turned to leave. But he thought better of his compulsion and reached for another piece of bronze instead. As he carried the metal to the hearth, he made every effort to present a calm exterior.

In a moment, the soldier was gone. Barabbas breathed a sigh of relief as he began the formation of another plate. But the soldier's exit was soon followed by the entrance of another figure who was very strange-looking. He wore a pitch-black tunic with a wide white belt and a black hat with a white ribbon. His stern face sported a big black mustache, but no beard. The mustache curved down and then up on the sides like one of those fancy door knockers Barabbas used to make. It connected nicely with his bushy black and white sideburns. He looked very strange indeed, and a bit frightening! He stood for a minute, looking the place over. Then, he smiled politely and motioned for the proprietor to come toward him.

“Yes, sir?” Barabbas said politely, as he carefully laid his work aside and walked to the counter. “I'd have come quicker, only I was working on that plate and was afraid to drop it. May I help you, sir?” He noticed that, despite the stranger's odd appearance, he still had the look of a Jew about him.

The stranger's penetrating eyes wandered over the profusion of fancy cups, plates, knives, shields, and other objects displayed for sale and rested upon the large sword hanging on the back wall. “That sword there, of what does it consist?”

“Why, it's made of the finest iron available, sir. Nothing but the finest.”

“Why, sharp enough, sir. Sharp enough to split a rock, or pierce a wall, or—or—or—”

“Or,” ventured the stranger, lowering his voice, “slit a Roman soldier's throat?”

“Yes! Or slit a Roman soldier’s throat, confound 'em! Now I've gone and said it, haven't I? I’ve finally said what's been brooding inside of me. I suppose you're one of 'em in disguise, or one of their spies. Well, arrest me, if you will, and have done with it. Our lives are without hope anyway under your wretched tyranny!”

The stranger smiled benignly. “Relax, my friend, relax. I'm Roman in citizenship only. . . .by no means in sympathy. Despite my divergent appearance, do you not see the Jew in me? I was born a Jew, just like you. But I was raised in a somewhat different environment. Having the chance, I determined to be my own man, to dress, talk, act, and think as much as possible on my own, without any outside influence. . . . Ah, but it did my heart good to hear you speak those treacherous words a moment ago. For, I, myself, feel the same way. Those Romans are truly tyrants and must be stopped!”

“Ah-ha!” The smith's face brightened. “So! You’re not one of them! Ah! I'm safe! And I have someone with which to share my rebellious attitudes!”

“Indeed you do!” Exclaimed the stranger, who had been glancing toward the doorway every now and then to make sure no one entered. He now leaned over the counter and spoke more softly and yet more emphatically, so as to ensure his listener's full attention. “And I'm certain there must be more who feel the same way about things as we do!”

Most likely. If only they would speak out!”

“And why do you think they do not?”

The smith's brow wrinkled. “I never thought much about that, but the only reason I can think of is fear. We're all afraid to say anything.”

Travel to ancient Palestine at the time of Jesus and the Roman Empire, and ask: What could a cynical, nonconformist, dry-goods salesman, a disgruntled blacksmith, and a musing mendicant all have in common? The answer: Down deep, they all want something better. The nonconformist, Manaheem, Herod’s truth-seeking foster brother, is hired by Herod to foment an insurrection against Pontius Pilate. Manaheem recruits the blacksmith, Barabbas, to lead the insurrection – much to the dismay of Barabbas’s Godly but fearful wife. The mendicant, an unfortunate but pensive young man named Timotheus, joins with an older beggar unsympathetic to his musings. Pontius Pilate sees himself as a weak ruler, but his wife pushes him to take over Herod’s territory. Meanwhile, Manaheem reunites with his former wife, Claressa, and after much soul searching, tries to blackmail Herod, losing Claressa in the process. Barabbas turns to robbery, enlisting the aid of the two beggars. Timotheus hesitates and almost turns back, but then decides to go along. Does redemption lie ahead, and at what cost to those who find it? Find out in this incredible tale filled with conflict, suspicion, and treachery.

James M. Becher was born in Lancaster, Pennsylvania. He graduated from Clearwater Christian College with a bachelor’s. degree in Bible-literature, and Biblical Seminary in Hatfield, Pennsylvania, with a M.Div. Becher was ordained in November 1974 and met his wife, Berenice, from Venezuela, while serving in a foreign student ministry in St.Petersburg, Florida. He is also the author of Impossible Journey, The Christmas Victory, and the non-fiction book, Principles of the Kingdom. which has illustrations from this book.