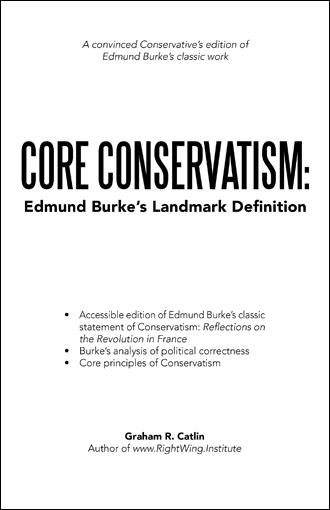 Edmund Burke’s Reflections on the Revolution in France remains a landmark statement of the perspective and principles of Conservatism in the English speaking world. It has earned Burke a reputation as “the father” of modern Conservatism.

Edmund Burke wrote his Reflections at the age of 60 after a career as a writer and Whig politician in the cause of parliamentary power in the face of Executive authority; as a champion of the rights of the exploited, be they Irish, American or Indian. In short, as a dissident and as a ‘progressive’ in politics – what today many would view as ‘left wing’.

Why, then, did a “progressive” become a “reactionary” ?

In short, the catastrophic upheavals of the French Revolution, inspired by the Materialistic thinking of the Enlightenment with its emphasis on the abstract “rights of man”. Edmund Burke realised that he was witnessing a paradigm shift in the understanding and practice of politics – the Christian worldview, the reality of the human condition and the wisdom of experience were being displaced by a Materialistic, atheistic worldview which rejected the past in preference for a new world order based on an anthropocentric, ‘apostolic’ Ideal. Edmund Burke called it “atheistical fanaticism” – today we know it as “political correctness”.

Edmund Burke wrote Reflections to counter the assumption that the Revolution in France should be imported to the British Isles. Instead, he maintained the reverse – that the French should emulate the English constitution as a true and proven guarantor of liberty. In reality the French Revolutionary assertion of metaphysical and philosophical Rights was a disaster for liberty and for the true welfare of the French people. For Edmund Burke, circumstance defines and characterizes every political scheme as either beneficial or obnoxious; the mere assertion of grand sounding philosophical abstractions is vacuous and misleading. And the circumstances of the French Revolution were a disaster.

Because its leaders failed to appreciate the fundamental principles and practice necessary to good government.

Good order is the basis of all good things, writes Burke in his Reflections.

Good order and good government derive from respect for the accumulated wisdom of the past. Only great grievance should prompt reform, and then that reform should repair – not demolish; reform should be in keeping with the style of the existing constitutional edifice.

I would not exclude alteration neither; but even when I changed, it should be to preserve.

Thus Edmund Burke defines a central tenet of modern conservative political thinking. The purpose of change, any change, must be to conserve the institutions and practice based on the accumulated wisdom of the ages. Reform must enhance, not destroy.

Edmund Burke was one of the great figures of the 18th century. He knew Adam Smith and John Hume. He was also acquainted with Rousseau. He was a philosopher and thinker, a practical and experienced politician whose worldview emanated from his faith in the God of Christianity.

Edmund Burke’s starting point and perspective is practical and experiential; it is not theoretical and ideological. This, of course, sets him in opposition to the idealistic and rational mentality of Enlightenment thinking.

Enlightenment thinking stresses the scientific and rational dimension of our existence. It sees scientific progress as pointing to a purely Materialistic explanation for our world; it views the spiritual as mere superstition. God is a convenient device to keep the masses in subjection to established rulers and to sustain traditional privilege. God does not exist.

The French Declaration des droits de l’homme et du citoyen was an expression of this thinking. It was also the intellectual and philosophical justification for the French Revolution - a Revolution which overthrew the existing order of Monarchy, Church, and Nobility.

It sought to establish one secular nation centered on Paris, organised on purely rational principles: the entire territory of France was divided geometrically into new departments. Everything was to be rational and equal in the belief that this would enable the people to be truly free.
In practice, however, the sheer upheaval and novelty gave rise to serious inconsistencies and tension resulting later in the murderous Terror and the subsequent emergence of the Dictator and Emperor, Napoleon Bonaparte.

Burke anticipated all this in his Reflections on the Revolution in France.

Edmund Burke could trace the trend of events because he possessed a keen insight into the fundamental principles and practice of politics. He was both a philosopher and a practitioner of politics. And he was a man with a deep sense of justice for all.

Where the Philosophes of the Revolution and the Enlightenment asserted the superiority of man’s rational intellect, Edmund Burke instead prioritized the innate sense of moral sensibility which every person possesses: - Conscience and Compassion.

Edmund Burke writes of the disturbing and costly upheavals in France : in events like these, our passions instruct our reason

Edmund Burke starts from an intensely compassionate place. He starts with the true needs and welfare of human beings – not Rights. His recurring complaint against the rationalist revolutionaries was that their fine Ideals came at a very high human price.

Graham R. Catlin read modern history at Exeter college, University of Oxford, England. He is the author of the political platform www.rightwing.institute which identifies the importance of the christian faith in the constitutional and political development of the English speaking nations. An Englishmen who has lived in France for many years, he is aware of the contrast in culture and thinking between his native England and that of France – the land of the enlightenment’s ideals: liberte, egalite et fraternite.