22 Years as a Hospice Chaplain 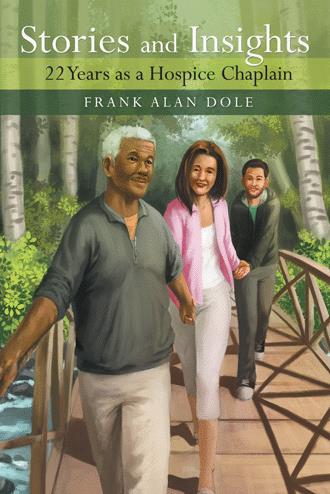 ALS (Lou Gehrig’s disease) is a devastating and degenerating disease. My very first patient I was assigned to after my training was Mike. He was confined to his bed in a full care facility. He was instantly engaging and the insights I learned from him have had a huge impact on my life. I saw my role as an encourager to openly and freely discuss whatever concerns a patient might have. As I learned later Mike had lived his life as a teacher ever looking for a teachable soul. It was very laborious for him to speak. He spoke in a very low volume fairly clear voice in short phrases. His legs and arms had lost most of their muscle strength. Mike was able to move his head left to right and on his right side touch his ear to his shoulder. I introduced myself to him and as he smiled, he asked me to get his “fart pillow.” I had no idea what he meant but his eyes looked to his right and there was a 3-inch semi flat rubber ball just at his shoulder. “On my - shoulder,” he said. I realized it was his call button modified so he could put it between his cheek and his shoulder to squeeze. It would then activate the electric call button system. It did look like a small whoopee cushion I once had in a little magic and gag box given to me one Christmas. (It got me into a lot of trouble but I digress). He asked me, “How is - it going?” I answered, “Pretty well.” Mike now looked intensely at me and said, “You knew?” To which I replied, “Yes.” “Attitude - all attitude,” he volunteered. I realized right then that although physically weak he was a powerful person indeed. He had navigated ALS and all its debilitating challenges with a positive life-giving attitude. I believed he was eager to share the lessons and insights he learned in his journey. Communication was a constant challenge, but oh so worth the effort. Mike could read me like a book. Maybe because he was not a novice to new hospice workers or maybe he saw a teachable heart. “Choices,” he said, “I’m very - happy - today” - “yes, even with - ALS.” “Do you - think - that’s strange?” Mike asked. I answered, “Yes and no.” “You said choices, so I’m assuming you are choosing to be happy.” Mike said to me, “You see - my limitations - Not what - they’ve - taught me.” Throughout all of his journey with ALS and his steady physical decline, God had been faithful. Mike chose to be moldable to the lessons from God. For he viewed his battle with ALS as just that - a learning experience. The Lord put him in a place where he had little options but to trust and lean on his faith and the character and the love of God. That’s where Mike kept insisting on the importance of our choices. “You’re a - chaplain, right?” Mike said. “Yes” I replied. “You - understand?” he asked. I said to him, “You are definitely giving me an example that will broaden my experience of those who have learned to find God’s joy in the midst of their circumstances.” He said to me, “It’s not - easy” - “better than - the alternative.” “Each challenge,” he said, “presents - a choice - each choice - a product - a joyful - attitude - or a - bitter spirit.” I told him, “I’ve only known a few in my life that lived what he just expressed.” He asked, “Tell me one.”

I told him the story of my friend’s mother who was dying of cancer and when I went to her bedside to pray for “God to touch her body,” she said, “You don’t know what you’re praying about, I’m at peace to go home. Have you asked God for direction before you prayed?” she asked. She was in the last days of her life yet aware of my need to mature in my faith walk. Contented, at peace and still very much alive and instructive. I told more details and Mike appreciated the story. Mike helped set the stage for my next 22 years as a hospice chaplain. Yes, he was dying from ALS and yet he was still full of life. His insights lived on through me and reached thousands in the years that followed. My next visit was two weeks later and during that time Mike had declined to the point of barely being able to verbalize. I saw him one more time before he went home to be with his Lord.

I learned from Mike that my patients could be teachers and mentors. That we all have lessons to share and our individual stories to tell. Sometimes the biggest gift was offering a listening ear. What a gift to be able to validate a person’s journey and their story. We all have dealt with pain either physically or emotionally, and many times both. Not all will learn lessons. Our experiences always shape our futures and affect our responses to life. For each of us has to deal with their life’s journey in their own way. Some become bitter, some become well, some victims, some victorious, some become teachers, and some never seem to learn and just get mad at life. Many of my patients and families have touched my life, offered insights that I hope to live by and passed on. I aspire to honor their lives and stories by recalling the truths they have shared.

2 Cor. 12:10 “Therefore I take pleasure in infirmities, in reproaches, in necessities, in persecutions, in distresses for Christ’s sake: for when I am weak, then I am strong.” KJV

This book takes life lessons and observations from the world of the terminally ill and offers inspirational and instructional stories. In this journey we call life, there are always teachers and mentors who have gone before us and students who follow after us. Picturing this concept, I envision three people on a wooden bridge crossing a stream. The position of these three people shows the one in front, which would be the mentor, one in the middle, a student and also a mentor to the one following. In the broader picture each person has another in front and another behind capturing the idea we are always a mentor / teacher and always the student. My heart's desire with these stories is to both illustrate this principle and honor those who mentored me.

Frank Alan Dole received his M. Div. in New Testament studies from Temple Baptist Theological Seminary in 1985. He became a hospice chaplain in 1994 until retirement in 2016. Served also as a bereavement coordinator and facilitator 2007- 2016. He was a teacher at Calvary Chapel Bible College extension campus in Fort Walton Beach, Florida 2003-2006. Frank was pastor/teacher 2011-2016 while serving the Air Force Enlisted Village - Bob Hope Village Chapel, Shalimar Florida. He and his wife Cindy now live in Ocala, Florida.