A History of German Immigration in Southern Brazil 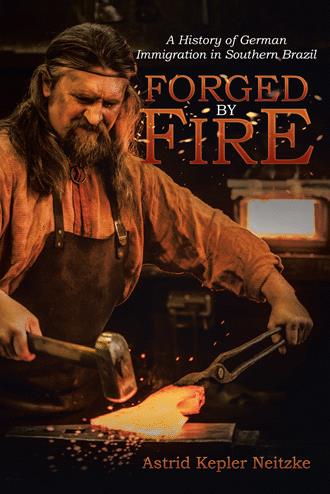 It seemed as if nothing was going right for them. The planting did not bud; the animals died; the house, could not be finished. "Why did we get into this?" Olga would ask herself. Her discouragement was so great that at one point, she thought of running away with Otto to her brothers' home in Porto Alegre. But even this she could not do alone!

In October, at long last, the missing boards arrived, and Adolfo, aided once more by his brother-in-law, finished their first living quarters. Now they could sleep much more undisturbed, after half a year under a roof and with only one wall, feeling in their bodies all the effects of the weather in the southern hemisphere. Little Otto could go back to his crib, and finally, the couple had their bed to themselves. Finally, they had a space they could truly call home.

Their second trial with beans, which took place in March, was awful since a plague of locusts eagerly devoured everything. Adolfo was walking on the small farm, Olga, at his side, carrying Otto.

“We lost everything again!” Adolfo said with a choked voice.

“I cannot dig anymore, Adolfo!” Olga said. “If I have to handle this hoe one more time, I'm leaving!”

“I know, I know . . .“ Adolfo grunted, his eyes watering, wondering why he had dragged his young wife and newborn son to New-Württemberg in the first place. “I need to think about it . . .“ Olga already knew what that meant. Adolfo went to the oven he had built outside the house under a roof, lit the fire, and then he brought the anvil. The iron bar Adolfo set amid the hot coals, put on the leather apron, and began to work out the piece of iron. He struck it to give it the shape of a sickle, not knowing precisely why he was doing that - the urge to pound something made him do it – the need to work till seeing a project with a beginning and an end. And while he was beating, thoughts were getting organized in his head.

Adolfo understood that the business of farming didn’t fit him. He was finding out that it demanded knowledge too complicated for him to master, and he was not sure if he could learn it as quickly as he needed to. Besides, realizing not to have the patience to wait for the results to show up. He was a practical man, had learned to take the iron in his hands, and beat it to the desired shape. And he saw the result the same day. Considering farming, however, it was a much different thing; it was a work of patience, of planting, and then waiting for months to have the reward. At the same time, he felt that the land didn’t smile at him. He felt rejected when not too long ago, he used clay to make bricks. He hated that. And now the same feeling returned. The earth denied him, so to say, the fruit of its womb, the nourishment that would make him a real farmer. Adolfo Kepler was not born to till the soil. His vocation was related to the business of iron.

There, hammering that iron bar, he felt like crying. Like the men of his time, he wept inside, that dry, weeping cry, for Olga needed a fortress — and he wanted to be that to her. It was beating harder, the rage rising his neck and reddening his face, trying to turn fate into something else. Then he remembered the advice he had heard so much in the past: ora et labora, pray and work. He was working as never before, but it was not enough. And then he prayed. And how he prayed. He did not close his eyes, didn’t kneel either, none of it; he prayed while hammering, and hammered while praying, a crying out, anguish rising from far beyond where he was, metal resounding in his ears and thoughts flying to eternity: "Show me what to do."

“Good afternoon!” the visitor startled Adolfo from his work and prayer as one who awakens a sleepwalker.

“Oh, sorry, I didn’t see you!” said Adolfo, dropping the hammer and the piece he was working. “How can I be useful?”

“My name is Karl Heinrich, and I just bought a lot here in New-Württemberg. As soon as I arrived, I discovered that there are no stores to buy the parts I need. But I've heard from some residents that you're a blacksmith. And from what I’ve seen, it's true.”

“Yes, I am a blacksmith. My name is Adolfo. Adolfo Kepler. What parts do you need?”

“To begin with, I need three machetes, three sickles, and three hoes. Those basic tools, you know? Then, if your pieces are good, I will ask for more,” Karl replied.

“No problem, I’ll make these tools, and the end of this week will finish them. Let's sit down to talk about prices and delivery date,” Adolfo replied, inviting Karl to enter the house and sit on the stump next to the crate, where they made the arrangements for the sale.

That was how the perfect answer came: as a coincidence, a common fact in the world of faith. Karl Heinrich became Adolfo’s first regular customer, having shown always and everywhere how satisfied he was with the quality and the finish of the pieces that he acquired, and freely telling this to everyone in the village. His convincing compliments rendered orders from other colonists, bringing Adolf back to his original vocation. On rainy days, he had to hammer inside his house, leaving Olga somewhat frightened by the sparks. Still, fascinating Otto, already standing and looking at that glow with a curiosity that made his father rejoice. “One day, I'll teach my boy," Adolfo thought proudly.

Otto Kepler was a unique chapter in Olga's life. Although he had cried a lot in the first few months, as he grew older, he became as sweet as a boy can be. Always cheerful, he had fun with everything and with everyone. Although a spider provoked fear in Olga, to the boy, it was fascinating. Sounds, noises, everything attracted him. He had his parents around, he felt secure, remembered nothing of the hardships and sufferings, he was happy in his innocence. That joy pulled Olga out of depression, which had always been knocking at her inner door since she learned of her husband's intention to move to New-Württemberg.

Hard-working and straightforward people of unshakable faith who leave footprints that their descendants will follow!

The book, written in a romantic style, will absorb you. You will be involved in stories of secure and resilient families who build successful companies.

The Author is Astrid Kepler Neitzke. Her father, Otto Kepler, is a first-generation immigrant. Her grandfather, Adolfo, was a courageous and tireless explorer, who came from Europe as a teenager. The Kepler Weber company started with blacksmithing and is today known worldwide in the agribusiness sector in the post-harvest stage of the grain production chain.

Astrid is his youngest daughter, who was born when her parents’ life was at its peak. As a baby of four months, she loses her father! What he left behind gave her lasting impressions that shaped the course of her life.

A huge treasure! Her mother, Fanny Stillner Kepler, continues to lead the family, keeping them happy together in the small town called initially New Württemberg and today Panambi, where until the Second World War, they also spoke the German language.

Astrid discovers that her grandfather, Vincenz Stillner, a native of Austria, was a street boy in Vienna, who became a beloved and respected pastor in Porto Alegre, Brazil.

The Kepler family continues to work and have faith. Other families are connected, like the Richters, the Rehns, the Stillners, and the Neitzkes. Astrid marries Ari Neitzke.

The Author upholds the cheerful and adventurous humor she inherited. People forged by fire which left a legacy to be remembered and imitated.

ASTRID KEPLER NEITZKE is Brazilian of German descent. She graduated in Accounting. Her work in the family business made her travel internationally.

She married at 23. A dedicated wife, loving mother of three happy children, grandmother of five boys, and involved in society and social works in Brazil and abroad.

Neitzke’s collected memories narrated in a beautiful story: images of love, faith, and trust in God unwrapped in a personal way.