Rise Up, Men of God 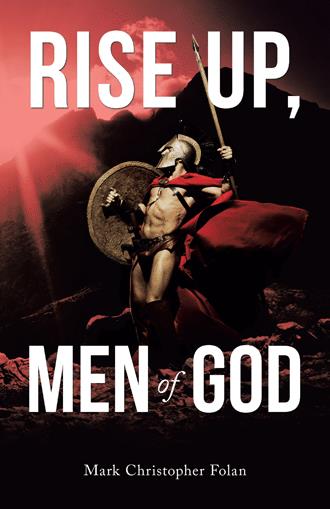 Chapter #1 Rise Up! (Believe) What is it to “be a man”? What is God’s view of being manly? What separates us from all others? The God of all creation encourages us males to rise-up and act manly as we read here: “Stand fast in faith, Quit you like men, be strong. ”(1 Cor 16:13) This scripture says to “Quit you like men” which can be translated as: - Show thyself a man - Prove thyself a man Mathew Henry’s Commentary says this: He (Paul) advises them to act like men, and to be strong. “Act manly, firm, and resolved: behave strenuously in opposition to the bad men; be not terrified of them; but show yourself men in Christ, by your steadiness, by your sound judgement and firm resolution.” We are to be manly and firm in defending our faith and living for God. This scripture is saying that we show ourselves to be men in Christ by our actions. There is something about our actions that makes us a man in Gods eyes. We are not a man simply because we were born as a male. We show and prove ourselves to be men by the way we act. I used to always laugh when I would read 1 Sam 25:34- except you had hastened and come to meet me, surely there had not been left to Nabel…any that piss against the wall. What makes me laugh is the wording. I think of all the times that I’ve done that and laugh that it’s in the Holy Bible! So, as men, we are born as a male, and we can urinate against a wall; but are we a Man in Gods eyes? In 2 Sam 10:12, King David’s army had the Ammonite army in front of them, and the Syrian army behind them; and were in dire straits. The commander of Israel’s army, Joab, makes this comment: 2Sam 2:12- Be of good courage, and let us play the men for our people, and for the cities of our God. It’s the picture of evil being all around, and we, rising-up as men and fighting. I love the phrase “play the men”; it reminds me of when I was a young boy playing army and fighting the bad guys. Today it would be laser tag, paint ball, or all those video games with the machine guns where we shoot the bad guys and save the good guys. God made us this way to “fight the good fight of faith”, and to become the man of God that we were born to be. It is as if we are in a battle between good and evil in our personal lives, and in the world we live in; and like all heroes, we are fighting for the good. God created us as men, to physically rises-up and release our seed, in the hope of creating life. In the same manner, God wants us to spiritually rise-up and release the seed of faith that resides deep inside our Spirit, and bring to life the purposes of God! What does it mean to do this? How do we “Rise Up”? How do we prove ourselves a man? One of my favorite stories in the Bible is one that is rarely elaborated upon, and even less seems to be known about it. This story is read quickly over as an account of one of King David’s mighty men; but I believe that a closer look reveals something of Gods heart. It’s the story of Shammah defending a bean field. 2Sam 23(11&12)- “And after him came Shammah…And the Philistines were gathered together into a troop where was a piece of ground full of lentils and the people fled from the Philistines. But he (Shammah), stood in the midst of the ground, and defended it, and slew the Philistines; and the Lord wrought a great victory. Before I begin to write about this wonderful story, I would like to lay a little groundwork. Throughout the history of Israel, we notice that Gods people seem to be bouncing back and forth between having victory over their enemies while at other times running away and hiding from them. As Israel did what was right in the sight of the Lord, they were victorious; but when they began to do what was evil in the sight of the Lord, their enemies would overtake them, and they would be running away and hiding for their lives. Then, of course, their loving Father in Heaven would have pity upon them, hear their prayers and raise up a deliverer who would deliver the people from the bondage of their oppressors; which is a beautiful picture of what Jesus did for us, once and for all, at the cross. This story of Shammah came at a time in Israel’s history when they were running away from their enemies and hiding to save their lives. More than likely, Shammah and the people with him were hiding in a bean field for the obvious reason of having food to eat. Now I know that these beans can seem like a delicacy, and that lentil soup could be one of a vegetarian’s favorite meals; but back in this day, much of it was grown to feed the animals along with barley and other things. Of course, the people of Israel ate lentils but more times than not it was when there wasn’t much else left to eat. The people of Israel loved eating lamb, fish, venison along with breads and savory seasonings.

When God created men, He had a very specific purpose in mind: They were born to have dominion over life and meant to know God as their Father and His son as their savior.

Similar to the way our physical body rises up and releases its seed to bring forth the life of a child, God desires that we spiritually rise up and release our seed of faith.

Mark Christopher Folan, who has spent more than three decades serving the Lord, and as a minister of the Gospel, shares vital components of serving the Lord in this guide to rising up in faith as men of God.

By living and promoting godly principles, the author urges everyone to declare God’s desires to a lost and dying world. Moreover, he encourages us to always be ready to speak our faith while standing ready to help others move closer to the Lord.

It is of the utmost importance that we come to know God’s ways of shaping us, to learn how we might fulfill our destiny, and become the great men of God that we are destined to be. Discover the amazing possibilities before you and rise up!

According to the files at the Catholic Charitable Bureau in Boston, I was born on December 23, 1959, to Mary Anne Folan, who named me Christopher (Christlike). The story goes that she was an eighteen-year-old Irish immigrant just off the boat who worked as a domestic in Cambridge. She was supposedly intimate with a very handsome nineteen-year-old Irish immigrant, which made me a purebred Irishman.

At three months, I was brought to the adoption center, and I can still see her kissing me on the cheek crying as she turned and walked away. Thank you, my darling mother, for not having had an abortion. I love you! I figured all of that was just a fictitious story because the Irish kids were going like hotcakes back then. Two weeks went by, and I was starting to get nervous. George Albert and Mary Theresa suddenly scooped me up and named me Mark Christopher (strong and Christlike). God is good.

My dad loved his Irish ancestry; he and I sang “Danny Boy” together near the end of his life. When they were about to throw the dirt on his casket, all of us hugged my mom and each other; it was a big ball of people. You couldn’t tell where one person ended and the other began. The bagpipes began playing. We never cried so much thinking Mom was burying her best friend. We held on tight. It was brutal. As the bagpipes played, something called out to my spirit, and that’s the way it is with my country. I’m not an Irishman; I’m an American who happens to be Irish. Call it the luck of the Irish if you will.

Here are a few quotes from Mark Christopher’s alter-ego.

Steven, the “mad” Irishman, a member of the cast of Braveheart: “This land is mine.” What? America? Yeah, it’s mine! (Smiling) You’re mad! Ha ha ha—Yeah, looks like I’ve come to the right place.

“If I serve God, do I get to eliminate spirits of hate and division?”

“Yes, America, you get to eliminate spirits of hate and division.”

“Yes, Father, I’ll ask them,” Is your father a ghost, or do you converse with the Almighty? To find and know the truth, Christians are forced to talk to God. Surely has the Lord brought me to watch your back, America. I never liked division and hate anyway; they’re not right in the head.

If any of what I wrote rings true in your heart, it more than likely was inspired by God. I’m no theologian, and I’m no saint though I’m trying very hard to be one. Many are going to be livid with animosity toward me for simply sharing God’s Word and declaring the truth our nation was founded on. They’ll say I’m some stupid nobody with idiotic and ridiculous views. My response to that would be the same as Shane Falco’s response to “You’ll never be more than a replacement player” from the movie The Replacements: “Yeah, I can live with that.” My sentiments exactly. I’m just another fool for Christ.

I’m one of those foolish, weak, base things, so in God’s eyes, I’m well qualified. (C’mon—that’s funny, right?) That’s all I have for now. God bless us everyone!

As a lay preacher and a student of the Bible, Mark Christopher has gained great insight into God’s desire and strategy to spiritually strengthen men and women in their faith. In his 33 years of service to the Lord, he has come to understand the many challenges associated with living for God, as a man, in our generation. Mark is apprehending and discerning his calling as a man of God and is becoming greatly encouraged and strengthened. His great hope is that as others press into these principles that he has come to understand, is that they too will become encouraged in their faith, and strengthened in their calling as a man of God. He resides in Southern California where his greatest joy is serving God and praying for his family and Nation.