Breaking the Octopus Grip of Addiction 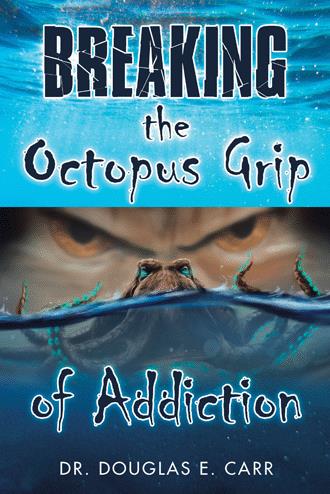 I (Doug) began crying out to God for this book because of frustration and disappointment. No person, parent, pastor or deliverance minister likes to see continuing failure, especially when it hits people they love and care for.
I think of JS whose loving mother has done everything possible to set him on the right track. He is a charming young man, bubbling over with potential. He has had dreams of being a great evangelist bringing hundreds of lost souls into the Kingdom. Unfortunately, addictive behaviors have continued to compel him into other behaviors which have pulled him away from his prophetic destiny and landed him in prison. He got out for a while and it looked like he was going to do well, but he messed up and will have spent one third of his life in prison by the time he is released. We need revelation to break Satan’s hold through addiction over his life.
I think of CH whose parents have been in ministry and faithfully serve Jesus. This young man has received many prophetic words concerning how God wants to use him. His intelligence is far above normal and God has much in store for him and his family. My wife and I immediately took to him when we began working with him. For a while it seemed for every three forward steps he took, the enemy knocked him back two steps because of addictive behavior. He has been doing quite well for the past year, and we are very grateful. Still, knowing how powerful addiction can be, his family and our church continue to cry out to God on his behalf.
I think of MS. There are very few people with greater ability to memorize and quote Scripture. When he is clean, he has anointing to minister powerfully. Many have been saved, delivered, and baptized in the Spirit through his ministry. The first time I met him I could see his potential in the Spirit. Unfortunately, addiction has knocked him back time and again!
His mother is a godly woman and strong intercessor, yet he had a warrant out for his arrest as I began writing this book. He ignored my calls and texts, and within a week was back in the county jail. We continue crying out for his total release from bondage. I trust and believe God is giving answers for him and so many others like him, which makes this book a work of faith.
I think of JH, a young man MS influenced for the Lord while they were in the same prison. I was asked to write to him and did so almost every week. I sent my sermons to the three of these four men who were in prison, and they all said they appreciated them. They promised and believed they would stay clean because of our ministry. JH was released after we began writing this book. I watched as his godly mother and grandmother loved on this young man. I did an intervention with him and his mother one night and thought he was turning around, but the devil used a strong addiction to pull him down again.
There are many good and helpful recovery plans. I appreciate Celebrate Recovery so much I helped initiate its program in two county jails near where we live. Many have broken free of addiction and are moving forward into their God-given destinies, through a variety of good programs and ministries. Praise God! But I can’t, I won’t be satisfied until I receive God’s revelation to see these “tough cases” set free.
I believe the Great I Am is releasing the revelation we need. The parents of these men have been crying out to God for years on behalf of their children. I’ve joined them in recent years and began publicly requesting prayer for answers several months ago.
The day before I began writing this book, we watched the full-length movie The Heart of Christmas during our normal two-hour worship service. My wife and I had previewed it a few days earlier. It is a riveting movie, so I was surprised when God downloaded a vision of the “octopus of addiction” and then labeled each tentacle that works under the strongman through the stronghold of the root spirit of bondage.
This brings great hope! Another wonderful addition to this book is my wife, Pamela, co-authoring it with me! She experienced her Father’s addictions and addictive behavior from her birth until he died much younger than he might have apart from addictions.
As many already know, the death of an addicted parent doesn’t break the hold of ancestral addiction off their descendants.

Addiction is multi-faceted and each facet must be addressed. Breaking the Octopus Grip of Addiction came through revelation of an octopus. The head represents the spirit of bondage, the tentacles represent: rejection, iniquity, rebellion, python, fragmentation, trauma and imprinting. This book equips addicts and their mentors to address a plethora of issues leading to the truth that will set them free.

Addictions have become one of the top problems in today’s North America. Almost every family has at least one addicted member. How do we as believers assist true seekers in finding freedom? Dr. Douglas and Pamela Carr not only layout the problem but describe in detail the steps to freedom. They noted the characteristics of the octopus and used it to frame the addiction challenges, outlining each issue and the route to freedom. I know both Doug and Pam well. I have watched them blossom over the years we have been in relationship. They started with healing and delivering themselves of their own issues and broke through into helping others. Now they are flourishing. I highly recommend both them and this book.

Doug was frustrated in ministry. He helped many, but felt powerless to help those who most needed help, especially addicts and tormented people.

Transformation began when a woman approached him one morning. She admitted she was addicted to gambling and facing bankruptcy. Doug was was shocked because he led her to Jesus years before. She had gone through discipleship, quit drinking, repented of a wrong relationship and was faithful to church.

As Doug listened, he reallized she needed more than he knew how to give. He heard a still small voice telling him to cast out the spirit of gambling. He argued with the voice. He didn’t believe in demons and deliverance. Yet the voice persisted and he finally gave a faithless command “spirit of gambling, I bind you and command you to release this woman now, In Jesus’ Name.” Nothing manifested and Doug and Pam soon left for vacation. He figured he would counsel the woman once a week for months or years when he returned home.

Amazingly, when he cautiously approached the woman again, she had not even been tempted after that prayer. Preivously she “ate, drank, and slept with desire to gamble”. Intrigued, Doug began seeking New Testament power for ministry through fasting, studying, and completing his masters and doctorate in deliverance and intercession.
Doug has ministered deep healing and deliverance for twenty-four years now and leads a ministry of equipping others to do the same.