God Saved Me For A Reason

The Story of a Modern-Day Prodigal and His Journey through Addiction, Recovery, and Redemption 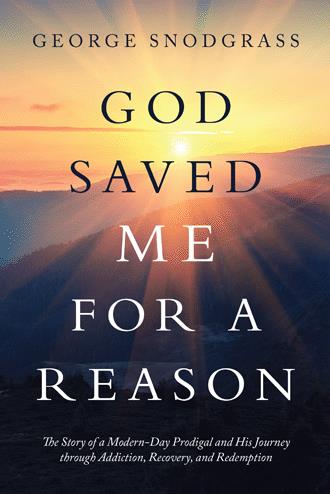 The path I was on, I kept going, picking up speed as I went. I was consumed by guilt and shame, while at the same time I couldn’t wait to do it again. Getting high was the only way I could try to outrun those relentless demons. Because I couldn’t put the genie back in the bottle, the best I could do was run harder and faster, though I could never run quite fast enough.

My senior year of high school is like a blurry kaleidoscope; the main pictures are of me having fun, getting by in school, and partying a lot. Drinking was by then a regular habit before school, and going to class with a buzz enabled me to play the role of the class clown. In fact, drinking and smoking pot became the main focus of all my activities, whether it was Friday night football, school dances, riding the roads with friends, or going to church. I’m embarrassed to admit that I even got high before church on Wednesdays and Sundays with a deacon. I would like to blame it all on the devil, but we are gifted and cursed with God having granted us free will. After church, we got the munchies and went to Shoney’s Big Boy, where we gobbled down hot fudge sundaes. I was having fun and started not to be too concerned about right and wrong. After all, if so many people whom I considered in the mainstream were doing it, how bad could it be?

Rationalization played a major part in my addiction, as it would for many years. I convinced myself that I was doing fine, and I certainly didn’t go around asking other people who might have told me the truth about myself. In fact, I avoided anyone who wasn’t doing what I was doing. I gravitated instead toward those who were. It wasn’t until years later that people told me how out of control I really was, especially that last year of high school. I merely thought I was having a good time and not hurting anyone else. That’s why I tell people now, young and old, that if they are close to someone who is obviously out of control, confront the person, and do whatever it takes to get his or her attention. It’s too late when you are standing around the funeral home, wishing you had said or done something that might have kept friends from ending up dead before their time.

Denial is the first and probably most stubborn symptom of addiction, and the last person to let go of it is the addict. The addict’s family will also likely be in denial. There’s a huge comfort in denial because it’s much easier to blame the crowd the addict hangs out with than the addict himself. I don’t remember anyone saying anything to me about my insanity, although they may have, and I didn’t want to hear it. Watching someone self-destruct is like watching a car wreck in slow motion. You hope the person survives, but you know reality may paint a different picture. In my case, only the grace of a loving God made the difference. The prayers of many righteous people, especially my mother, were being offered up for me, and as the Bible says in James 5:16, “The prayers of a righteous person are very powerful.”

By the time my senior year came to a close, life had become one big party. The FFA (Future Farmers of America) had played an important role in my school life because agriculture classes were my favorite. I had even gone so far as to travel with other agricultural officers to the University of Tennessee to see about attending college there. UT was known for its agricultural studies. But that was when I still had dreams, and that dream quickly faded. I was even elected FHA (Future Homemakers of America) King and Sentinel in the FFA, and one of my roles as sentinel was to recite a line at the beginning of our monthly meeting, only I was too drunk to recite it. I was whisked away and somehow managed not to get into trouble over it, but I was ashamed of myself, especially since the incident occurred in front of Mr. Willoughby, one of my favorite teachers.

One other senior year escapade sticks out in my mind: a day when I was too drunk to make it from the parking lot to my first class. Drinking before class had become my routine by this point. I was so drunk that I had a real problem staying on my feet. I was sliding down the lockers when a coach spotted me. Big trouble, one would think, but not in this case. During that time, the kids were partying with some of our teachers, especially those who were not much older than us. The result was not suspension or expulsion. The coach just laughed and told one of my buddies to get me out of there.

The message I received was: Go on, George, party hard! Make the most of it while you can because you’re gonna have to settle down soon, but not just yet. It may sound like my only friends were party animals like me, but I also had friends who were heading in the right direction. They were planning for the future, going to college, or doing what it took to be successful. However, I had drifted so far that I was simply lost.

On graduation night, there was a positive vibe in the air on the football field. We all whooped and hollered, clapping buddies on the shoulder and getting phone numbers, with promises (that were seriously intended) to keep in touch. But when it was all over, and everyone had drifted away, I cried as I made my way slowly through the parking lot toward my car. I knew deep down, where I did not like to venture, that the best carefree days of my life were over. I was terrified because it was time to grow up, and, above all

This easy to read book will give you the hope and inspiration you need as you begin the process of recovery from addiction. As you take this journey from hell to recovery with George, you will discover insights that will motivate and encourage you to seek the road to recovery. There is no complex scientific data here, just straightforward information that will give you the best chance for recovery.

The importance of the 12-step programs already in existence (which are based on Biblical principles) are also discussed, but the author adds a spiritual dimension to recovery by emphasizing the miraculous power and love available through Jesus Christ. You can get a jump-start on recovery by reflecting on the author’s journey, becoming aware of the 12-step programs, and contemplating the faith that inspired the song “Amazing Grace.”

Even though the author felt hopeless at times and thought about giving up, deep down he knew that God was working in his life and saving him for a reason. That reason is revealed in this book as he encourages you to believe that life can be a wonderful experience.

You’ll laugh and cry as you take this journey with George Snodgrass. You have nothing to lose and your life to gain.

George Snodgrass understands addiction because he has been there. He has inspired thousands of people with his Amazing Grace Recovery Program. George dedicates his life to helping those who suffer from addiction. In addition, he is a resource for families and friends who struggle with understanding the addictions of their loved ones.