No Authority Except from God

The Biblical Boundaries of Obedience and Submission in the Last Days 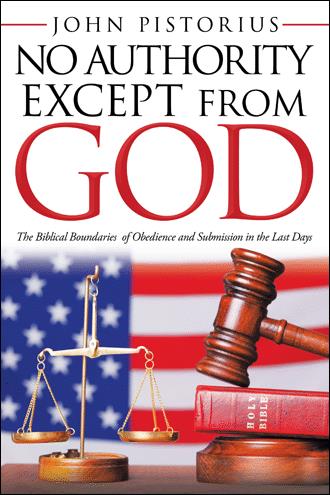 Without resisting human authority, the founders of this republic would not have declared independence from England. Slaves in these united States would not have stood for freedom, had they given in to human rulers. Those who formed the Underground Railroad would have turned a blind eye to their plight. Women would have ignored injustice and inequality. The Suffragette movement would not have formed. People from around the world would not have aided those who were detested by German authorities. Men like Martin Luther King Jr. would have remained silent in the face of injustice and discrimination. Women like Rosa Parks would have never challenged the status quo about bus seating. People with disabilities would not have demanded equality, and civil rights violations would still abound.

If the early followers of Jesus had complied with the established human authorities, Christ’s church might have vanished from the face of the earth. Absent the proper stand against ungodly authorities throughout time, the church as we know it would be completely different today.

Men like Jan Hus, Peter Waldo, and John Wycliffe would not have taken their stand. They would have accepted the established Church of their day. They would have conformed to the religious rules of that time. Had they complied with the human authorities, the English Bible might not exist. The religious rulers would have stopped them from translating it. The beginning of reformation would not have occurred; at least not then.

Later, men like Martin Luther, John Calvin and Huldrych Zwingli did not submit to the humans in power. Instead, they resisted the authority of the church as they preached ideas of reformation. They protested what was wrong, even though it meant trouble for them. This would not have occurred if they unquestionably submitted to the human authority. They would have obeyed and yielded to those in power. The ideas of reformation would have withered and died like fruit on the vine in the hot sun.

Those men we now call “Reformers” would not have condemned what they knew were unbiblical doctrines, practices and dogmas. They would have yielded to the authority, even when they knew what was passing as Christianity had left its first love. If they had submitted to the human authorities, what we know as the Christian church would be much different today. Their persistence in reforming what they knew was wrong led to many positive changes. It also led to countless errors, but that is the subject of another book.

In this book, I reveal the truth about obeying human authority. My prayer is that authentic followers of Christ will receive this material with an open mind. As we move ever nearer to Christ's return, everyone must comprehend God’s Word on this matter, especially those who accept the one we call Jesus as the Messiah.

God’s Word reveals the truth about obeying all human authorities, whether they are religious or civil in nature. Few grasp the importance of this subject. Fewer understand the biblical limits placed on our submission to human authorities. This is why I had to write this book. It is also why you will want to read every page of it.

It is written that a ruler will emerge to rule the entire world and place all into submission. Nobody will be able to buy or sell anything without being marked by this ruler.

In turbulent times, everyone must understand the source of all authority and the biblical grounds of obedience and submission to human authorities. This book combines biblical evidence with historical records and personal experience to shine light on the truth about obeying and submitting to human powers.

As you read, you’ll get answers to questions like:

• Must we surrender our beliefs, our faith, and our moral ground to human authorities?

• What does God say about submitting to human authorities?

• What does the Bible tell us about the leader that will take control during the end times?

• How can those in authority use their power to properly honor Him?

Even now, as the world has been besieged by a new virus strain, God’s people must weigh every order and mandate with biblical truth. The enemy of souls will twist the truth to suit his own agenda. As we respond, we must trust in God’s Word and remember there is No Authority Except From God.

John Pistorius began preaching on the streets of Pittsburgh, Pennsylvania, at age fifteen. After a violent attack by a religious leader at age seventeen, he ran from God. Upon returning, he brought those years of rebellion into his ministry to others. He has spent the years since searching God’s Word and history for the boundaries of obedience to religious and civil powers as he ministers to congregations in Western Pennsylvania. He serves as the pastor of a small rural church that obeys God above all others.