Twice As Much Tomorrow 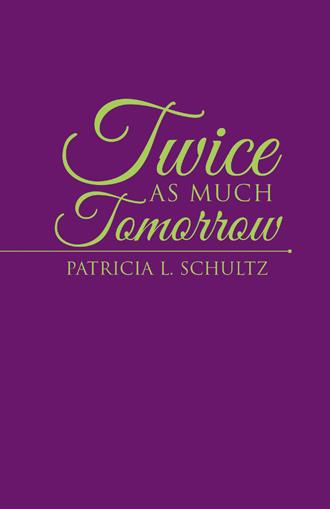 My mother and father sat in that hospital room watching their daughter die. They had no medicine, because they had no cure. When Enza was in pain, in between the shots of Morphine, they heard her screams throughout the entire hospital floor. She was in Methodist Hospital, Houston, TX. for six months, and for six months Mother and Daddy waited for something to happen that would change the whole outcome. It would have to be nothing short of a miracle, but in all their lives they'd never known anyone personally who had experienced a miracle; I'm not sure Mother even knew what a miracle was, or if they were even really sure they happened during that time. Neither of them went to Church; neither of them had ever experienced any kind of anything with Jesus Christ. Mother knew only what she'd learned from her daughters while they were attending Catholic elementary, and junior high school; that wasn't much. They were intelligent people; they were just of that population who is not God knowledgeable, period.
Mother and I talked several times before Mother passed away, about her childhood and lack of knowledge of God. Her family was very, very poor; her mother didn't care for her or her only brother, and she wore mostly homemade dresses made of gunny sacks ( a burlap sack some of their dried food products were delivered in). One of her sisters, being her mother's favorite, wore pretty store bought dresses. They never went to Church, never had a Bible, doesn't recall anyone telling her about God, except us girls going to the Catholic Church, (and she went to Mass with me a few times and possibly my older sisters). All she knew about God was that He made us, and that He is God. That was it.
During those long days of waiting, watching her daughter slowly slip away from her, I believe the LORD was talking to her and she never realized it was Him. He was giving her Wisdom, day after day, as she sat in that hospital room; her mind seeming to wander with thought after thought about a God she had never been told about, never known, until suddenly she knew in her heart, she knew that she knew, that all she had to do was ASK GOD. How does someone, who has never been told about God, suddenly know something you can only find in the Bible? If nobody tells you, and you don't read it, how do you know? God was talking to her during those long, frightening days and nights in Enza's hospital room. And then she knew that all she had to do was ask. Of course she could have asked right there in that hospital room! But all she had to draw on from experience were the very few times she went to Mass with her daughters, so she went to the Chapel, where she thought God lived.
Maybe Enza's entire illness was for Mother's salvation! It didn't come right away, but the seed was planted, and it was planted deep! We never know why the Lord allows things, and it really isn't for us to know unless He reveals it to us. "God works in mysterious ways, His wonders to perform." I would give you chapter and verse here, but that one isn't in your Bible! I always thought so. As it turns out, it's the first line, almost, of a poem, which later became a hymn, written by William Cowper in 1773, "Light Shining out of Darkness." The first line of the poem is "God moves in mysterious ways His wonders to perform ..."
Enza had a very troubled life; I believe there were things in her childhood, when she was a little girl, that none of us knew about. I do know she was kidnapped by an old woman who lived in our neighborhood, and she was held for hours. I don't know the whole story, but I know my mother was the one who finally got her back. Mother could be vicious when you messed with her children! It was safer dealing with a furious mother Grizzly Bear defending her cubs, than to deal with my mother protecting her children! But I believe something happened to Enza, something she never told any of us about, maybe not even Mother and Daddy. I believe it happened while she was in that house that day. I don't know if anyone else was in the house or not.
Daddy was always quiet; he probably didn't say ten words a week; he read the newspaper or a book, and seemed like he was never paying attention to anything that was going on around him; just reading his book. I was the baby, so I had the advantage of watching three older sisters grow up before me, and I saw that Daddy was always aware of everything that was going on around the house! Like the night I was in Enza's and my bedroom, on my bed reading a book , and a guy named Dawson, from our school came to the window and asked if Enza was home. I said sure and went to the dining room to tell her. Daddy, sitting in the living room, reading, nonchalantly got up without saying a word, got his shotgun out of the coat closet by the front door, calmly walked to the back door and fired...

‘Twice As Much Tomorrow’ is about the journey of a young lady who fell in love with God when she first met Him personally, in 1974. She was bold enough to tell Him she wanted “everything He had that she could possibly have, and she didn’t care what the cost was, personally, to herself.” He took her up on her offer, and the next thing she knew her life was in a downward spin that was more like a roller coaster! There were funny times, heartbreaking times, and times she felt so close to God she could cuddle up and go to sleep in the shelter of His arms. Once Jesus actually took her for a walk with Him, hand in hand in the Spirit, with tears rolling down her face the entire time! She always told Him that was her biggest desire, and that she wanted them to just walk hand in hand, and talk like He and the apostles did when He was here with them. But she couldn’t talk for crying! To have that kind of relationship with God is worth any price! Take a walk with Patricia and find out what it’s been like. She was given a direct promise from God, confirmed by three ladies, one of whom didn’t even know the other two, and a visiting Evangelist, who she thought she was well hidden from, because she knew exactly what he was going to do! But he needed to give her a Word of Knowledge from the Lord, and would not be deterred. She then spent 40 years in the wilderness before she came to her Promised Land.

There were times she didn’t think she would make it mentally, but she always knew she would make it spiritually. Sometimes she felt like she was barely hanging on to Him by just a thread from His robe, and times He picked her up and carried her for days, weeks, months at a time. Then one night, she woke up to the knowledge that He was right there in the corner by the head of her bed. “Everything will be okay Patricia. It is time. I’m also going to bless you financially.” You see, ‘The Promise’ was never about material things; it was never about finances. It was always so much more! When God says He will never leave you, He means it! You can always count on Him. ALWAYS!

The one thing she’s learned above all else is that nobody can ever love you like God loves you. They don’t have the capability; God created love, and God is love.

You see, ‘The Promise’ was never about material things; it was never finances. It was always so much more!

Patricia is retired after 20 years with the U.S. Census Bureau, and resides in Texas with her husband Robert. She has raised four children, has eight grandchildren, and 8 great grandchildren. She graduated from college while her youngest daughter was attending college, because it was something she had always wanted to do. She did her Internship at the Cephalapod Center at UTMB in Galveston, TX. under Dr. Lee. She loves to study and write.