by Adapted by L. H. McIntosh 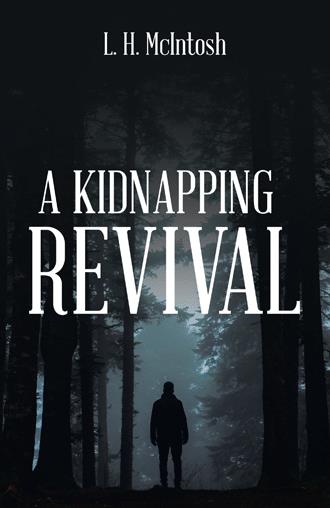 Taking a deep breath, Gary said, "There's no good way to tell you this, Alan, but Anna has been kidnapped. It happened about 3:00 this morning. Riley is fine. He ran all the way over to our house when Anna was being taken. He said that was what his Momma told him to do. He is with Beth, and Honcho is with them as an extra precaution."
"Thank God Riley is safe, but oh, no, please God, not my Anna, no, no. Do you know who or what or why? Oh, God, please protect Anna wherever she is, God, and please, please bring her back to me."
"Alan, we don't know the who or what or why, but we won't stop investigating until we do. Right now, you need to leave the conference and see when the next flight is. Billy has already checked out the house and we are all moving to the compound for safety. I know you will need to get some things from your home, so we'll see you at the compound when you can join us there. Meanwhile, I'll call the church secretary and let her know you'll be out for a few more days."
As soon as Alan got off the phone, he went to Charles and told him what had happened. It was all he could do to remain calm. Charles said, "Alan, you've meant so much to the men and women here at the conference. I know you can't give any more now. God knew beforehand this would happen and has provided for all contingencies. Go home. I'll tell the conference why you had to leave. You and Anna will be covered in prayer."
Alan left and went to the front desk to ask them to check flights for him to Memphis. They said the earliest flight he could make was Delta flight 1281, which left at 3:15 p.m. He booked the flight and went to his room to pack. As he finished packing, there was a knock. Standing at the door was a young man who handed him an envelope. Alan called Gary, who directed him to open the note carefully and see who delivered it. Inside were three words: "I have Anna."

Anna calculated her possibility for escape as the vehicle slowed. She could not open the back doors with her hands and feet bound. For the same reason, any hope of knocking one of them out, well, it was a dumb thought. She couldn't even see! The possibility was zero per cent. No escape. She thought maybe she could talk her way out of the situation.
"Hello, is anyone listening?" Anna asked.
"No, shut up!" was the response from one of them. She thought he was the leader.
Undaunted, Anna asked, "Where are you taking me?"
"If you don't shut up, the only place you will be going is into the ground," said the other man. She knew he was the one who had roughed her up.
Anna said nothing after the last retort. When the vehicle stopped, the men got out, leaving her in the vehicle alone. They were apparently parked inside a garage. She needed the bathroom and she was incredibly thirsty. Yet no one came to check on her. It was as though she had been forgotten. What kind of kidnapper forgets his victim?
After a while, Anna heard someone walking toward the vehicle. The back doors were opened, and a man reached in and pulled her out. Her hands and feet were unbound, and she was pushed toward the house, still blindfolded. They entered what she was pretty sure was the kitchen. Then, mercifully, she was taken to the bathroom, where she removed her blindfold. There was no window, and someone leaned against the doorframe.
When she came out, she was given a bottle of water and offered food. The men had left while she was in the bathroom and she found herself in the custody of a woman, who introduced herself as Mrs. Bosco. She seemed to be a few years older than Anna. She was armed with a .38 which she looked very capable, if not eager, to use. Anna tried to start a conversation but was ignored. At least the handcuffs and blindfold were off. After dinner, she was escorted to a bedroom with adjoining bathroom and locked in. Again, there were no windows; she was almost too tired to care.
"Thank you, Lord Jesus," Anna prayed, "for keeping me safe this far. I pray for Alan and all my family, especially little Riley. I thank you for Mrs. Bosco and ask you to use me to reach her for you. I love you, Lord. You are my hiding place."

Earlier, at the Atlanta airport, after Alan had boarded the plane, he tried to pray as he headed home. Panic threatened to erupt. His seat mate was a man about his age, who wanted to talk, which was the last thing Alan wanted to do. He listened politely and made appropriate sounds, thanking God the man didn't know he was a preacher and asking God to forgive him for his attitude. He also prayed for the man as he seemed lonely. As the plane was landing, Alan wondered if someone would be waiting to do him in.
He decided to reconnoiter, thinking maybe he could get information about Anna. He refused to think she might not be coming back because of his faith in God and because he could not handle it. He approached the parking garage quietly, looking for anyone who seemed out of place. There was one possibility, a man in a silver Suburban looking at Alan's truck. Alarm bells were going off in Alan's head.
Having decided the man was watching for him but had not yet seen him, Alan ran through his options. He could simply get into his truck and leave, confident the watcher would follow him, or he could sneak up behind the man and get his vehicle and license plate information. He chose this option, taking care not to be seen and using his phone to photograph the vehicle and the license plate.
He then moved away from the truck and sent the photographs to Gary, along with the message "If I don't show up at the compound tonight, I've been taken by the man in this vehicle."

A kidnapping fueled by hate in the stealth of night threatens to derail the faith of the victim’s husband, a preacher, who has his own demons to fight.  Add to this other crimes and bizarre ransom demands.  The husband’s life skids out of control while the fate of the wife is unknown.  Will she survive?  Will she be allowed to return to her husband and child?  Will he survive?   Will their faith endure to the end?  Detectives, led by the husband’s brother, try to identify the kidnapper.  Their leads are confusing and fruitless.  The husband continues to be subjected to attacks by the kidnapper and others, who may or may not be working for the kidnapper.  His sanity hanging in the balance, he turns to his eternal source of hope and comfort.  His wife, too, leans on her Savior.  Neither knows the outcome, but both know who does.

The author was adopted when she was three years old by a farmer and a schoolteacher. She became a lawyer, practicing in Washington, D.C., Houston, Texas; and the Mississippi Gulf Coast. She eventually returned home, experiencing spiritual renewal and birthing her only son, Nathan McIntosh, who is now a lawyer living in Jackson, Mississippi.