My Story! His Song! Blessed! 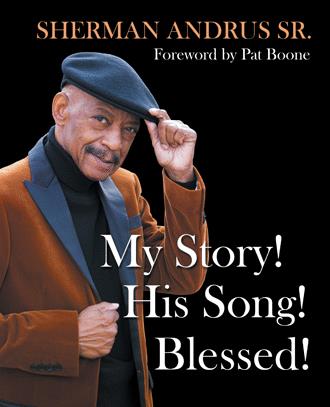 First, I want to say I never had the privilege to tour with Elvis Presley. I joined The Imperials after they were no longer working with Elvis. When I joined, they were working with Jimmy Dean. One evening Elvis asked the guys in The Imperials to bring me to his suite in Las Vegas. He wanted to meet me because I was the first guy to sing, I’ve Got Confidence. At the time I did not know it, but he wanted to make me a member of the “Memphis Mafia”, his group of friends. He was very gracious and as in the case with Jimmy Dean, if he had objected to The Imperials hiring me, they would not have. The Imperials always thought they would get back with Elvis, but The Stamps really had it sewed up.

When I met Elvis, he gave me an embrace and a handshake and said, “Now, you are one of us.” Immediately I started joking around with him and said, “Well, I hear all of your friends have a “TCB” necklace and I don’t have one.” I was just joking with him. He said, “I’m going to get you one!” A few days later at the Desert Inn as we were backing up Jimmy Dean, he came to the show just before the curtains opened and placed jewelry boxes in our hands. We were looking for a place to put them quickly and he thought that was extremely funny. We did the first set with Jimmy Dean, about fifteen minutes of music, and then retired to the Green Room. He was upstairs with his entourage laughing at us. When we opened the jewelry boxes, all the guys had a bracelet. In my jewelry box was a bracelet and a “TCB” chain. He kept his promise.

He was so respectful to women and children that I was able to take Winnie and Sherman Jr. up to his suite. We all sat around the piano and no one heard any profanity. I have a picture of us with him along with Mama Cass and it is a great memento. I loved being around him because the only other person who loved music as much as he did was Andrae Crouch.

Elvis sang more music off stage than on and he embraced all different styles. A lot of the songs he sang, like C.C. Rider, was done by Chuck Willis, a black artist, and I admired the way he took songs and made them his very own. His conductor, Joe Guercio, did not realize that the song, I Got A Woman Way ‘Cross Town started out as a Gospel song, It Must Be Jesus by The Southern Tones. Ray Charles changed it to I Got A Woman Way ‘Cross Town and recorded it as a rhythm and blues song. Elvis later recorded it and made it a rock and roll hit. Glen Hardin, pianist, and arranger for Elvis, did a wonderful job and it was a real joy to work with the TCB Band. Jerry Scheff, Ronnie Tutt, James Burton were great artists to work with. They are all legendary performers and should be in the Rock and Roll Hall of Fame. James Burton is! I also enjoyed getting to know and work with The Sweet Inspirations; Estelle Brown, Myrna Smith, Sylvia Shemwell and Portia Griffen. The only original member who is still living is Estelle Brown. I often sang on their songs when I wasn’t singing with The Imperials and they were fun to travel with. They too should be in the Rock and Roll Hall of Fame. I enjoyed so much working with Joe Guercio and the group. Joe always talked about writing a book. I wish he had! He had the most storied history of all of us. Sadly, he is no longer with us. I especially loved to compete with him trying to “Name That Tune!” I even won a couple of times. As I look back, I am so impressed with the way Elvis treated all of them. I genuinely loved that about him!

When we were with Elvis in the suite, he did not want to sing Rock and Roll, he wanted to sing Gospel music. One day when we were singing an old hymn, Mama Cass who was there, began to cry. She told us that she had started her singing career in church with that song. She sang with us and she had a great voice. Elvis also liked romantic ballads. One evening he wanted to do the song, Softly As I Leave You made popular by Charles Boyer. It was both sung and recited. Unfortunately, we were the only two in the room who knew the song. I couldn’t play the piano, and neither could he, however we tried our best with many starts and stops along the way. We both loved the song because the words were so beautiful.

Elvis was fun to be around because he was a practical joker. He was always practicing Karate on his valet. One of the funniest times was when Joe Moscheo’s house in Nashville had been robbed. Elvis got on the phone and asked all his Karate friends to be ready to meet him in Nashville at Joe’s house. He asked his valet to get his robe and he put it on. Dressed in his robe, along with his official J Edgar Hoover’s badge and his gun, he took us all in his limo to Bali Hai motel to Joe’s room to set up a command post. He didn’t have his driver, so he grabbed the doorman and made him drive the limo. We are all in the limo and he clears his throat and spits on the floor. The driver turns around and looks at him and Elvis says, “What are you looking at? I can buy you and this car.” No one went to Joe’s house, but it was great fun, and I was laughing the whole time.

On a serious note, one evening he was showing me his latest album, Live From Hawaii. He was so excited to see all over the album cover, “We love Elvis!” in multiple languages. I told him that it was a God thing. I have never seen any artist as dearly loved as he and I believed it was ordained by God. He agreed with me. He was a very spiritual man. At one time he had us sit in a circle, hold hands in the dark, and repeatedly listen to my testimony and the song, Jesus Made Me Higher. He was intense and wanted everyone to focus on the message of the song.

On several occasions I sent him an invitation to attend Bible Studies on the strip in Las Vegas. Jim Reed was the chaplain of the Strip and he held Bible Studies on Tuesdays and Thursdays in between shows. The chorus girls would come in their costumes and were very frank in the questions they asked. They were incredibly open to hearing the Word because they did not know how to “fake it” since few had ever been in a church. Unfortunately, I don’t think that the people closest to Elvis ever got the invitations to him. It would have been an honor to travel and work with him because I admired his love for music and his generosity. I genuinely believe that he was blessed with a special talent. I’ve never seen anyone live so long in the hearts and lives of people as Elvis Presley.

Catch a glimplse into the life of the first African American known to break the “color barrier” of Gospel Music. His story is filled with challenge, triumph, loss and victory at a time when the United States was transitioning from segregation to integration. Share in the disappointment and success Sherman experienced while moving to the top of the Gospel Music industry, blazing the way for other African Americans and other young people to follow. Hear the heartbeat behind his songs. Be inspired as he shares how faithfully following God shaped his choices and decisions all along the way. Sherman Andrus shares his blessed and incredible run in life in Gospel music with compelling frankness and humor!

Sherman Andrus Sr. is a living legend in Gospel music and is best known as the man who broke the “color barrier” by becoming the first African American lead singer of a mainstream Christian music group, The Imperials. He sang professionally with Andrae Crouch and The Disciples, The Imperials, Andrus, Blackwood and Company, and Andrus and Bingle. As a member of The Imperials he also sang with Pat Boone and Jimmy Dean and was a friend of Elvis Pressley. Sherman is a Godly man, a Grammy and Dove Award winner, Gospel Music Hall of Fame inductee, song writer, producer, soloist, friend, mentor, father and husband. From humble beginnings in Louisiana to top performance venues like Carnegie Hall and Las Vegas, concert halls and churches throughout the world, Sherman has lived a life of “firsts” filled with joy and heartbreak. He has been forever faithful to God and has consistently shared the Gospel, speaking and singing the truth in love.