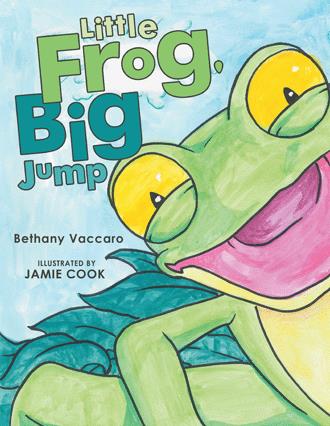 “Little Frog, why don’t you ever jump over the puddle?” His friend asked.

Little Frog imagined falling into the puddle. He imagined all the other frogs pointing and laughing, it was just too dreadful.

“Is that all that stops you?” His friend smiled wide. “You’ll never know until you try. And even if they do laugh, I’ll be close by!”

Little Frog felt jitters in his tummy. He felt like he couldn’t quite catch his breath and his heart was beating like a drum. Little Frog decided to try. He stretched his arms. He flexed his hind jumping legs and did a few hopping exercises to warm up. Finally, Little Frog closed his eyes, took a long deep breath and counted to three. “One, two, two and a half, three!” Up, up, up, Little Frog soared. Jumping was a breeze! He felt certain he was as high as the trees. Little Frog had never felt so happy and free. Until he opened his eyes. He was not as high as the trees, jumping no longer felt like a breeze and he was not going to make it to the other side. Little Frog panicked as he fell down, down, down…Splash!

Little Frog, Big Jump is a story of perseverance. Little Frog not only finds the courage to face his fear, but discovers the importance of empathy, with a twist in the story that teaches the value of having a growth mindset and learning to laugh at yourself!

Bethany Vaccaro is a Paraprofessional by day, a children’s book author by night, and a mother at all times.

She lives in New Hampshire with her husband, three daughters and their ferocious feline named Charlie Fatz. She loves eating (not cooking), music, making funny noises and jumping in, and over puddles. She does not enjoy cleaning her room.