A Promise of Love by Christmas 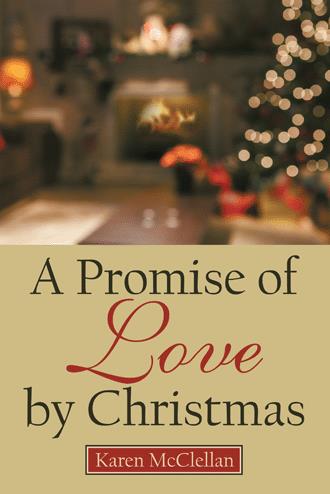 On the eve of December 12th

The logs in the fireplace snapped and popped as the flames danced wildly, allowing an occasional spark to drift aimlessly up the dark, narrow passage of the chimney toward the snowy December sky. Danielle, wrapped snugly in her favorite afghan, listened to the wind howl and whip around the corners of the cabin as if it were searching in vain for even the smallest crack or crevice in which it could enter and wrap its icy fingers around her. No matter how hard she tried, the nights would never let her forget. Especially nights like this, nights that were so like him. To most, Garrett was warm, kind, and all that was good. To Danielle, he was nothing more than a beautifully sculptured piece of ice, artistically made to look like something he was not. Garrett was the strange yet somehow appealing combination of fire and ice.

Danielle awoke to the sound of ice pelting the cabin windows. She had forgotten just how treacherous the Colorado storms could be. Rising from the sofa to gaze out at what nature was delivering to her doorstep, she was immediately thankful that Mr. and Mrs. Miller at the Country Market had stayed open long enough for her to pick up a week’s worth of supplies. She knew that even with four-wheel drive, her pickup wouldn’t be able to handle the Rockies long and winding roads in this weather. Knowing that it would be a day or two before the roads would be open to the few vehicles that traveled them, she realized that she had made the right choice in stopping at the cabin before returning to her small hometown of Salem, Wisconsin…, and Garrett!

The evening of December 13th

Looking at the empty brandy bottle, she was amazed that the only pain she felt resembled a baby lightning bolt that would occasionally dart from one temple to the other. It was nothing that a few aspirin, a hot shower, and a good meal wouldn’t cure. Drinking had never become a habit to her, but she fully understood how easily one could be drawn into the life of the bottle. Just as the common cold or flu would worsen with nightfall, heartaches, too, became almost unbearable as the setting sun was acknowledged by the vulnerability of those it surrounded. With a few good, stiff drinks, the hurting would cease and be replaced with an uncaring attitude that almost seemed to welcome the darkness and serenity of the night.

After discarding the bottle and placing the glass in the kitchen sink, the realization of the situation hit Danielle full force. With no radio, television, telephone, or ties of any kind to the outside world, she would be forced to follow through with her intentions of this trip. She would finally be forced to sort out her feelings and face the problems that she had been unable to run from. Only then would she be able to face Garrett and get on with her life. Yet not even the thought of a new life, one free of the hold that Garrett had on her, was enough to fight off the slight panic that rose from within her. Nightfall was only a few hours away, and she was stranded, alone, to face the most dangerous entity of all - her heart.

Garrett stood at the picture window of his cabin while staring at the stormy sky. The radio station claimed it was the worst snowstorm Colorado had seen in a decade, and all roads to the mountain were closed until further notice. He’d seen a lot of storms since he moved here two years ago, and some of them had been pretty intense. So, to hear this was the worst in a decade wasn’t good news. Yet none of that mattered. She was here. He could feel her presence. Garrett closed his eyes and silently prayed that the Lord would keep her safe and warm throughout the night. Tomorrow he would head up to Danielle’s cabin, on foot if he had to. He knew what needed to be done; and it needed to be done now.

Danielle no sooner opened the cover of the photo album and the lights went out. A sigh of relief escaped from her lips, as yet another detour halted her from the nightmare she was about to embark on. Getting up from the cozy nest she had created for herself, Danielle used the light of the fireplace to find her way to the elaborately carved cedar chest where she had earlier spotted a flashlight.

“What is that?” Danielle mumbled under her breath. She could see some type of light outside the den window. As she pulled back the curtains, a downed power line was emitting a display of sparks that would put most Fourth of July exhibits to shame. Within seconds, red, yellow, and bluish green flames were shooting up almost as high as the roof on the cabin. Startled, Danielle staggered backwards, tripping over a coffee table, and landed with a thud on the cold hardwood floor.

“Garrett! Are you there?”

Garrett dropped the axe and rushed to get his two-way radio off the seat of his SUV. “I’m here! What’s up?”

Nate sounded out of breath. “Just south of you, Eagles Crest, the Emmerson place, it’s in flames. We can’t get the equipment up there!”

There was only one narrow lane through Eagles Crest. With the snow and ice it would make it nearly impossible. Even now the snow was falling at a rate of six inches per hour. He knew he was their only hope.

It’s been two years and memories of Garrett still haunt Danielle’s dreams. Why did he leave her? Why didn’t he at least confront her with whatever it was that she said or did to make him stop seeing her? There were too many unanswered questions and she couldn’t keep living like this. She wanted to move on. She knew in her heart it was time to face the issues that not only tormented her but were beginning to control her.
Little did she know, it was more than memories that were out to torment her. Who was out to get her and why? Life was getting more complicated by the minute, and she had nobody to turn to and nowhere to run.
Garrett knew the way he had broken things off with Danielle should have been handled differently, but going back for a re do was impossible. However, now with her so near, he knew he had to take this opportunity to win her back. There was only one way that could happen. He had to show her a new and special kind of love with each and every day of Christmas that passed. A gift each day that would stand the test of time and a true love that would never break her heart or leave her alone.
This Christmas season, with a little faith and help from his friends, Garrett’s hope is to see Danielle receive the ultimate gift…, the promise of love by Christmas.

Karen is a pastor’s wife and a follower of Jesus Christ. She was raised in a Christian home and has spent the majority of her adult life serving in her church community. Whether she was singing on a praise team or working with children, she loves to serve the Lord. She is a graduate of Kidmin Academy holding a diploma in Children’s Ministry. For five years she and her husband ran a Christian Drug and Alcohol Rehab called the Mt. Zion House for Women under the direction of Pastor John LaGalbo. She is also an avid writer of poetry and song holding medals for Poet Laurette and Judge Advocate.
It is through her writing that Karen hopes to reach others with the gospel message, and, inspire today’s generation with good wholesome entertainment.
When Karen and her husband are not traveling in their RV doing ministry, they visit their home located in Burlington, Wisconsin. Together they share 7 beautiful children, (their spouses), and 21 amazing grandchildren.