Daily Inspirational Praise for “Uplifting Your Soul” With God’s Grace! 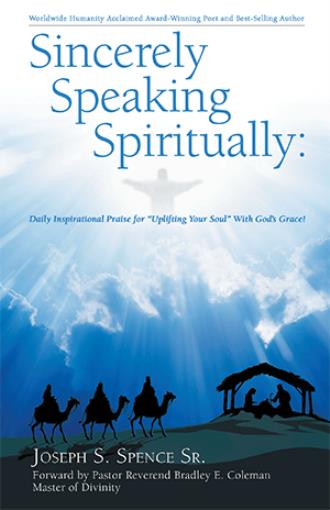 Writing a poetic prayer is not a very easy task as reciting a prayer. It is also certainly very different from writing a regular poem. Although some of the principle are similar, the poetry prayer in a matter of fact, is dealing with the truth of the matter. While the regular poems maybe fictional in nature, the prayer poem is real. It comes from the heart as a supplication of intercessory prayer, and standing in the gap for another soul. It relates to real-life situations, and is factual in words. While the regular poem uses imaginative and creative language, the prayer poem uses more concrete and literal language.

The poetry forms of both maybe the same, in terms of narration, and uses the same stanza formats, such as: haiku, senryu, freeform, tercet, four- and five-line stanzas, couplet, ballad, epigram, sonnet, ode, and the like; therefore, the architecture and construction of the forms are similar. The styles and the use of language are mostly different in nature. However, they share a similar theme of inspiration, motivation, and uplifting the souls of others.

This, “Sincerity Speaking Spiritual,” poetic text is divided into five sections. The first begins with regular spiritual poems in various narrated forms and styles. The second consists of prayer poems. They are mostly in the freeform style. The third reflects a variety of invented forms and styles. The fourth is the “Spiritual Epulaeryu” poetic form, created by me during my travels around the world. The essence of the form addresses succulent dishes and drinks. The ones in this book addresses spiritualty as food and drinks, which uplifts the spirit. The form was invented by me, based on sampling succulent dishes during my world travels. The fifth and last section is a glossary of the various forms and styles of poems highlighting understandable definitions.

There is also a variety of poetry forms in this book developed by me, which are included. First is the “Epulaeryu” poetry form, regarding succulent dishes from around the world. Many are enjoying the use of this poetry form on a variety of poetry sites around the world and are participating in competitions. The second is the “Linking Pin Sonnet.” It is regarding spirituality. It displays linking of the previous line to the next as a form of strength. This was created by me based on the linking pin concept of organizational development and leadership in management. It’s also based on the linking pin concept of studying the bible for instant recall based on passages of scripture relating to real-life situations. The third is the “Seventh Heaven” poem. This poem requires the mentioning of seven and heaven in the poem in a spiritual connotation, thus, making it flows with reverence and grace for the reader as its identifying principle.

Poetic prayer is a dynamic and cosmic moving force for the soul. It makes a person whole and stimulates an exploration of inspiration in the spirit to its very core. It brings about a process of creation which inspires and connects life with the spirit. It allows a person to become graciously entwined with, and not maligned with life itself. It inculcates a precious quality of mind, body and soul into reality. It enables an internal and external blending of one’s self to obtain a medium of equilibrium even if the pendulum swings in the opposite direction. Poetic prayers in reality, are God’s words speaking in a different form and style unto others for great understanding, in a unique way, as a precious language of grace and reverence.

Poetic prayer instills an orderly process which many consider, sanity. Additionally, it institutes a stabilization factor which brings to reality, out of dissention, the state of being which establishes normalcy and order to a world spinning out of control in chaos. Poetic prayer is considered the finer quality of reality. It enhances a precious and creative quality of life, beyond what one would consider an abnormality to obtain precious normalcy.

When applied to many souls avoiding the seeking of redemption, or politicians straddling the fence, they would somehow refer to poetic prayer as an elusive state of being or mind, since it does not exist in a vial or test tube where it’s capable of manipulation. However, poetic prayer is that which ascends the lack of order in bringing about tranquility where none existed before. It’s capable of stimulating a revival of the spirit where it supposedly already exists in a state of mundane dullness. It’s an ongoing and sensational revelation from God for uniting the mind, body and soul as one entity.

Poetic prayer enables an intertwining of the trinity in the spirit. It’s an uplifting process in which a rhapsody and essence of the soul is touched deep from within its core, causing the heart to resonate with new life—poetic prayer stimulates new life from God! It’s spoken and unspoken words unto the senses, yearning for a higher order of creation, and to be expected in a world of instability, thus instituting God’s stability thru intersession. It’s the precious unveiling of a newly found revelation of higher existence for the mind, body and soul. Poetic prayer is, not static. It’s a dynamic and moving force for the soul to dwell in peace with ones’ neighbors, as the new commandment states without a troubled heart, thus, inspiring an upliftment of God’s creation!

Praise for Sincerely Speaking Spiritually “These are the great words of a true ambassador for literature around the world who has accepted the Word as his mission. Inspiring verses that deserves the highest praise, that have received international awards! Poetry with biblical sounding and fantastic flight of the thoughts, inspired from the highest places, dictated as if by God! Amen!” — Stoianka Boianova and Minko Tanev, internationally acclaimed poets, Sofia, Bulgaria. “Another poetry collection from one of the most passionate poets of all times. Joseph Spence Sr. is indeed brilliant in his navigation of spiritual poetry themes in biblical forms in an intricate way that stands as a signature for his readers; this is indeed a must read!” — Balogun Iyanu, founder of the League of Poets and executive head of Teens Got Poetry, Lagos, Nigeria “Joseph Spence’s new book, Sincerely Speaking Spiritually, is a revelation! His unique style of poetry writing, using pin sonnets and septolets, gives his poetic prayers resonance and depth. His unique navigation of spiritual poetry themes in biblical form are a modern-day book of Psalms, in which he gives praise to our Creator for His blessings while, at the same time, laying at His feet our needs, desires, and concerns for a troubled world and nation that only He can restore. I highly recommend this book of poetry. It should be included with daily meditation, scripture reading and prayer!” — Thomas E. Mitchell Jr., journalist and editor of the Milwaukee Community Journal, Milwaukee’s largest Africa American newspaper

Joseph S. Spence Sr. is a professional poet, author, speaker, man of God, researcher, and book reviewer. He is the author of seven collections of poetry and coauthor of four poetry collections. He served as a United States Army commissioned officer of twenty-six years honorable service, and also as a lay minister with designated military Chaplains. He holds several degrees, including one in divinity from Faith Theological Seminary. He is currently a member of Siloah Evangelical Lutheran Church in Milwaukee, Wisconsin.