Quest for the Simpkins’ Gold 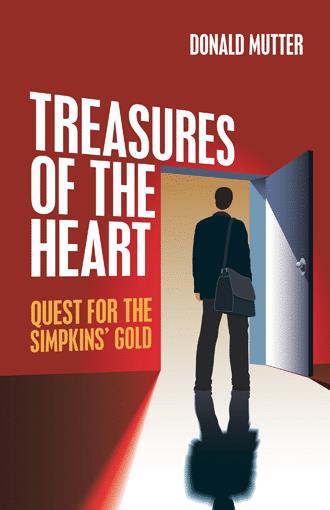 Having to stretch his neck, Tom slowly raised his head up over the post. Starting with the back hallway, he slowly moved his eyes across the room, straining in the darkness to see what he could. Enough light was shining through to make a small sparkle on the chandelier. Nothing was moving, that was for sure…WHAT WAS THAT? Tom noticed a figure over by the front door. His heart leaped in his throat, his hair stood up on his neck, and terror engulfed him like an ocean wave. THERE THEY WERE--two RED EYES, burning like coals of fire, were looking right at him. He could feel his heart thumping, and beads of cold sweat broke out on his face. This was the end—he knew it!

Tom Lee Parker is a fourteen-year-old boy going through his awkward teen years. What makes adolescence tougher for Tom, though, is that he is a preacher’s kid. His father, Reverend Parker, has pastored the church in his hometown Tom’s whole life, and Tom has gotten into plenty of scrapes at school because of it. For Tom, church is a Sunday morning chore—and bore. Tom just wants to find adventure, and he soon does in a run-down old mansion that is supposedly haunted but might also hide a fortune in gold. Tom and three of his friends decide to investigate, hoping to solve a hundred-year-old riddle. Along the way, they discover hardships and danger in their quest. They must battle unseen forces in order to succeed, but they also learn there is more to this “treasure” than they could have imagined. Tom sets off to escape his humdrum life as a preacher’s kid and find gold. Instead, he finds a different treasure—a treasure of the heart.

Donald Mutter lives in Atkins, Virginia, with his wife Connie. They have been married forty-two years and have one son and three grandchildren. Donald has pastored the Marion Pentecostal Holiness Church for the last twenty years. This is his first book.