And Then The End Will Come 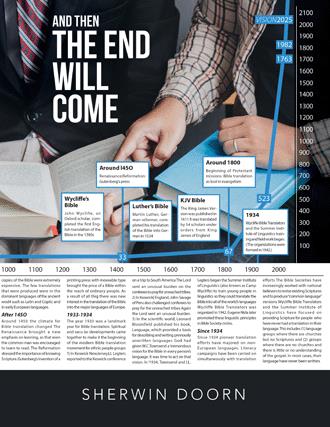 As Jesus was sitting on the Mount of Olives, the disciples came to Him privately. “Tell us,” they said “when will this happen (destruction of the temple), and what will be the sign of your coming and of the end of the age?” Matthew 24:3

Jesus then gives many signs that precedes His return and then tells of the greatest final event which is the title of this writing. He also tells them that only the Father knows at that time (Jesus did not know then, as He emptied Himself when He left Heaven) when our Savior will return. I believe the graph from Wycliffe Translators gives the most accurate time in His-story when He will return.

To really grasp the full meaning of the “line” you must now look at history from a different perspective. It is not just the happenings in the world as taught in the textbooks but the real purpose of the events. Satan knows the scriptures and must delay the “line” as he cannot stop it. Look at the graph and see how little progress was made in spreading the good news. From Adam until John Wycliffe in the 1380’s the line was straight. God used other forces and it went up dramatically after year 1800 AD! Can you see the fantastic change in just 200 years? Satan sees this too and he knows Matthew 24:14. The delaying destructions he causes are in the signs our Savior has given and he is getting desperate to stop the line. He caused World War I and II to stop Christians in Europe and America from doing missions and spreading the Word. These are not just historical events but clearly a major part of the spiritual battle designed to stop the progress of the graph.

The United States is a special country purposed by God. At this time, we are commemorating the 75th year anniversary of D-Day. As mentioned in Chapter 3, I believe that those who died were injured or who served, will have special favor with God on the judgment day as they suffered and some died, for the Gospel’s sake. That is true for those who were Christians and those who were not.

For Jesus to return there must be the fulness of the Jews. So Satan had in mind to destroy Gods beloved people and murdered 6 million of them in WWII. Also, the fulness of the Gentiles must occur, that is the Word throughout the entire world. The world wars plus other events were to stop that. Then it was communism. Then the liberalization of the churches. Now the attempts to destroy the US economy, which finances most of the mission work, by flooding the country with illegal immigrants, violent gangs, diseases, and drugs. Again, as times will be getting very difficult and persecution increases, the intensity of the spiritual battle is caused by the progress of the line on the graph. As Chapter 6 pleads, let all the churches unite for the final battle!

History is His Story and the driving engine (force, power) of this event is Psalm 103:11-12 and ultimately clarified in John 3:16. The longing of God’s people is to see the promised Son of God, Yahweh (Messiah, Jesus Christ). Many books were written and predictions made as to the day of His return. It is the most awesome occurrence that will happen in world history in addition to his birth and creates the most excitement and interest for God’s people. That makes this subject very popular and of most interest to those who will hear Jesus call his/her name at His return.

This book is not written as an end times book to set a date of Jesus return. Rather it is to challenge all churches who love Him and his appearing with a factual time structure line that can be forced to culmination. We have the “power,” only being enabled by the Holy Spirit of course, to bring Him back! We should all lay aside the “adiaphorah” which can divide and cause divergence and as one body, focus on this one goal! From the graph you can see that the goal can be achieved in the lifetime of many living today. This should be an impetus to work harder and faster to fulfil His command to all of us to “go and make disciples of all nations” Matthew 28:19. This is the eleventh commandment that results from the summary to love God above all and your neighbor as yourself.

God, who comforts us with the fact that He directs our steps (Proverbs 16:9 & 19:21) moved me to begin a business which was often a difficult journey. Soon after I started such a venture I received a pamphlet from Wycliffe Bible Translators (1983) with the time line that is on the cover of this book. I became excited as this picture made clear how we, as Christians, could bring Jesus back as He had promised. We could impact His return by getting the Gospel translated into all languages as He commands us to do in Matthew 24:14 “And this gospel of the kingdom will be preached in the whole world as a testimony to all nations, and then the end will come.” The time line can be moved to its end by supporting, praying for, and working with the Holy Spirit for all the ministries that appear as the Holy Spirit is being poured out. (Joel 2:28-29) The goal of the business was to finance many organizations doing this work but was not realized to the extent that was hoped for.

The graph on the cover filled me with anticipation and direction for my life. I wanted to have a part of that historical line and put pressure on its completion with Jesus return. Finally, a sign of His return that gives the clearest picture of a “date” for which many people are looking for! This is a clear idea of the direction of History, giving meaning to world events that lead to its culmination or end.

This time line, in reality, reveals world history from the beginning to its end. It should motivate us to unite for the ultimate goal of Jesus return. It is an interpretive tool for world events and helps explain human occurrences influenced by the evil one. He is well aware he is finished when the line is complete and is trying to stop the propagation of the Gospel any way he can.

I believe a book could be written on each subject covered by each chapter of this book. However, this book by design is not large and the chapters are short, as Dr. McGee said many times, that for people to reach and understand, the “cookies must be put on the lower shelf”. In other words, this is not a theological dissertation but hopefully a writing that can be easily read and understood at any age.

I believe that the Graph from Wycliffe that created my passion for missions is the most accurate prediction of the time of Jesus return. The increasing chaotic events in the world make the year of Vision 2025 a realistic and believable revelation. The proof of His “dated” return is found in the words of God Himself in Matthew 24:14.

VISION 2025
By the year 2025 a Bible IN EVERY LANGUAGE!
—Wycliffe Associates
And this gospel of the Kingdom will be preached in the whole world as a testimony to all nations and then the end will come.
—Matthew 24:14