Beyond Believing: BE-Living in a Wonderful World Gone Wonky 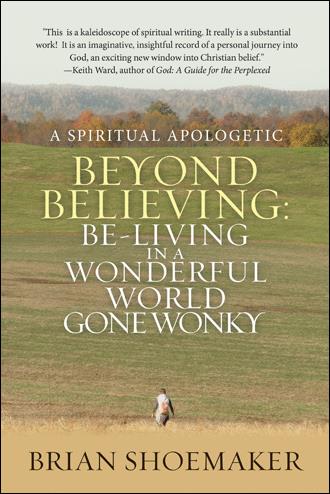 The effects of the wonky in our wonderful world may jolt us to the core of our being, “shaking the very foundations of our lives.” During seasons of “death, plucking up, killing, breaking down, weeping, mourning, throwing away, refraining from embracing, loss, tearing apart, silence, hatred, and war…” (Ecclesiastes 3:1-8), the core of our being yearns for more than natural gratification. We hunger for spiritual manna, not materialistic mammon! We are designed for the nourishment of what Jesus metaphorically called “the bread of life that comes from heaven and gives life to the world.” (John 6:33)

Jesus said, “…one’s life does not consist in the abundance of possessions,” (Luke 12:15) … “man does not live by bread alone, but by every word that proceeds from the mouth of God….” (Matthew 4:4). To live well or “in abundance” (John 10:10), means that one gains a new perspective of being when one enters into a safe and sacred space: the Presence of God! In this sanctuary within the self we discern that our existence must regard humanity’s exquisite awareness of this cooperative mindfulness between persons and God.

This book originated a decade ago after grappling with the effects and challenges of my own wonderful world -- gone horrifically wonky. While I was definitively religious, I found myself in an unfathomable condition of loneliness and estrangement. All that I had once believed demanded revision or rejection. My religious training was superseded by a deeper yearning: more manna, less mammon.

What emerged from my season of absolute despair was a new awareness of Presence, a mindfulness of communion with God and a revised “spiritual” apologetic for believing. Taken as a holistic experience that continues to this hour, this triad of experience is what I call BE-Living.

In a world gone wonky, people are looking for a system of belief that can offer them hope. This book offers the reader more than just believing in “something.” It is about BE-Living through cultivating a deeper awareness of the presence of God in one’s everyday life.

Brian Shoemaker was born and raised in Dayton, Ohio. He attended Fairmont East High School. He received his Bachelor of Arts Degree from Cumberland College in Williamsburg, Kentucky, and both his Master of Divinity and Doctor of Ministry degrees from the Southern Baptist Theological Seminary in Louisville. His sabbatical education includes the study of Christian Spirituality, Biblical Exegesis, and Science & Religion, respectively, at both Bellarmine University and the University of Oxford.

As a youth, Brian Shoemaker was an accomplished music and comedy entertainer, humorist, and actor. He performed in many venues including local television in Dayton. He always held comics like Red Skelton, Laurel and Hardy, Dick Van Dyke, and Sid Caesar in high esteem due to their ability to add laughter to a complicated world.

Before Shoemaker’s conscious commitment to the teachings of Jesus, he had been baptized as an infant in a Presbyterian Church, raised in a United Church of Christ, then came to his own faith during the Baptist revivalist movement in the 1970s. It was recently through a series of tumultuous events that Shoemaker came to embrace the sacramental tradition of Anglicanism as his chosen expression of worship. Still, he continues to celebrate the diversity of the Body of Christ!

Dr. Shoemaker has been the pastor of churches in Ohio and Kentucky, served briefly as a missionary to India, and taught biblical and religious studies for nearly two decades at a major Christian secondary school. Along with this book, he has published articles in major magazines and newspapers, and has written several plays. Most recently he has been described by the Association of Christian Schools International as a “Master Teacher.”

He and his wife, Rhonda, offer a ministry of music and comedy for churches, civic groups, schools, and comedy clubs. One of the highlights of such performances was when the couple shared their ministry at the Red Skelton Performing Arts Center in Vincennes, Indiana.