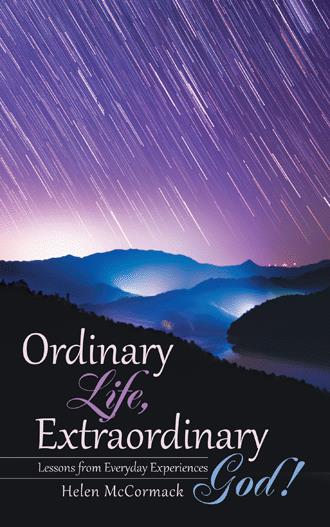 “I’m going to see Grandma H tonight.” I said, as my mother tucked me into bed.

I was six years old and had lived in bed for several months because of rheumatic fever which resulted in severe heart involvement. I was pale, thin and weak. I had been in and out of hospitals several times as doctors tried to find medicine that would help me.

My earlier childhood had been idyllic. I enjoyed playing on our small farm near a lake in Minnesota. I loved the smell and sparkle of that lake and listening to the waves lick the shoreline. I loved to listen to the birds and walk in the woods. Apple trees dotted the yard. There were two gardens that produced crisp carrots, tangy onions and sweet strawberries. I loved playing in my playhouse and creating mud pies that would have rivaled Sarah Lee’s childhood pies.

During these days, however, life was different. My bed was placed in the living room to be near my parent’s bedroom. There I played with my dolls and learned to read. If I had to go anywhere I was carried because I was too weak to walk.

Once, when I was having a very good day, my parents entertained company. Since I was very flexible, I had impressed our guests by putting both feet behind my neck--at the same time. Later when I told my mother that I was going to see Grandma H, she became nervous because that grandmother died when I was two.

I fell asleep but my mom checked on me several times until late in the night when she pulled my thumb from my mouth and in the light of the flashlight, saw that my thumb was tinged with blood. Not seeing a bite mark and realizing how lethargic I was, she knew that I was very ill. She called the doctor who came to our farm and drove us back to the hospital. Yes, I’m old enough for that to have happened! During that 8 mile drive from our farm to town, I remember commenting on the beauty of the stars. I was quickly told to lie very still and not talk. At the hospital the diagnosis indicated that I was experiencing pulmonary edema as a result of heart failure. If my mother had not recognized how ill I was, the doctor said I might not have lived more than one or two hours longer. “All the days ordained for me were written in Your book before one of them came to be.” (Psalm 139:16b). God was in control of that evening and prompted my mother to check on me. God knew that the days He had ordained for me had not yet ended. If it had been His will that I die that night, I would have. Nothing on earth could have prevented it.

Even though I didn’t realize it, God had begun to teach me that I am not in control of life. I’ve needed several refresher courses on that topic since I have always struggled when I’m not in control. We don’t know God’s plans but we do know Who brought us into being and Who ordered our days. That is to be enough. Some might view my life’s beginning as a mistake, since I was born in 1946 to an unwed mother. However, I’m thankful that, with God, there are no mistakes in His plans for purpose or length of life.

Finding my way in the Fog

There were times while we were in Lithuania when the fog was so thick that even from my 7th floor apartment building, I couldn’t see much of anything. For days at a time in the morning, at noon and even at night the city of Klaipeda, Lithuania was shrouded in thick, soupy fog. It covered the ship loading cranes on the coast of the Baltic Sea. It hid the nearby tall apartment buildings. Every day was gray, wet and dark. I heard that this was normal for fall in Lithuania, especially near the seacoast but I found it rather depressing at times.

During our lives there are days or even weeks at a time that seem gray and dark to our hearts and minds. We can’t see God as clearly as we would like. Sometimes we feel that we cannot see him at all. When we feel lost, how then are we to live? “For we live by faith, not by sight.” (2 Corinthians 5:7 NIV). When I leave my apartment in the morning, I must live by faith, believing the school where I work is still in its usual place even though I can’t see it. When I head to the grocery store, I must also live by faith, believing it is still in its usual place even when I cannot see it from my apartment window. As I gather my bags to get groceries (they charge for them) and head toward the general location of the store, I eventually see its outline and am assured that it is indeed there. If I depended on sight alone, I would not go to school or to the store because I would think they were not there!

We may laugh at how silly it would be to live by sight alone in the midst of fog, but don’t we sometimes live by sight alone in our spiritual lives. We often say that God is far away in the dark times of our lives. Is He really? He promises, “Never will I leave you; never will I forsake you.” (Hebrews 13:5b NIV). When He makes promises like this, why do we think He is gone, just because it is dark?

How do we find God when He seems distant? I found the school and store in spite of the fog, by heading down the street in the usual direction. Therefore, our help when God seems distant, is found in drawing near to Him in the Bible and through prayer. The Bible promises; “Come near to God and He will come near to you.” (James 4:8a NIV). If we head in His direction, as He instructs, we will find that He is in the usual place and He is waiting to show us the way in our dark times.

“In a world that rushes at breakneck speed, these devotions slow us down to consider. Reflecting on nostalgic moments from the past and connecting points between everyday sights, sounds, and impressions with the timeless truths of God’s Word, Helen McCormack reminds us of what we may already know but need to pause and ponder.”

“Where the rubber meets the road” is an oft-repeated saying. Similarly, in Helen McCormack’s devotional, Ordinary Life, Extraordinary God, she puts shoes on God’s Word, the Bible, by showing how the clear truth and rich wisdom of the Bible walks through her own life, whether that life be in Lithuania, Germany, or here in the U.S. A wonderful read that will challenge, yet bless the reader.

Just as nutrition and exercise are essential for physical growth, nutrition and exercise are essential for spiritual growth. The 52 devotionals in this book are designed to offer the reader an opportunity for spiritual nutrition through applying Biblical truth to everyday life. Sometimes we face simple daily life challenges but sometimes it is necessary to grapple with deeper issues. We’ll consider issues such as guilt, near death experience, integrity, obituaries, pickles, a distant God, temptations, future expectations, particle board, escalators, and mistletoe.

In addition to being a wife and mother, Helen McCormack has been a speech therapist, puppeteer for a handicapped awareness program, church administrator, classroom teacher in psychology, family living and special education. She has lived in Minnesota, Colorado, North Dakota, Lithuania and Germany. Throughout those experiences, God taught her much and she began writing devotional articles for the Minot (ND) Daily News. She is frequently encouraged when she hears how these devotionals have blessed readers, some of them complete strangers. Multiple readers have asked that she compile some of these devotionals into a book. The result is this book.