Hidden End of the Line 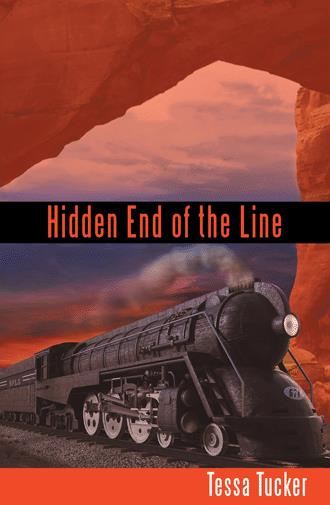 RED PINNED JUSTIN to the top of the speeding train. Justin lay on his back pressed down. The hot metal roof burned the skin on his cheek and right arm. He felt the weight of Red on top of him, breath like onions. His eyes watered. The roof stretched only eight and a half feet wide. They struggled, like wrestlers, only more limited space. Red shoved the right side of Justin’s head into the roof. Justin’s ears rang and all he could think was how much his head hurt as if a vice was crushing it. He knew Red was strong enough to kill him. Sweat ran down his copper-colored bangs. He shut his eyes as the salty sweat burned them. The height above the blurry ground made Justin dizzy. His vision blurred as his whole head ached. The copper-haired teen closed his eyes to avoid seeing the distant sunbaked ground far below. Sweat dripped from both teens.

The rumble of the wheels constantly sounded. Wind whipped. Justin grew nauseous at the dizzying height. The teen’s stomach swirled. Bile rose. Head spun. The hot poker burned Justin’s left side below the ribs on his pale skin where his shirt lifted.

“Ughhhhhhhh,” Justin screamed. Burning pain seared through him. He let out a terrible scream.

“Pea brain. Look at the tracks and switches,” Red yelled, “Justin hurry, there isn’t much time. Look at the train tracks!” Red’s eyes darted between the distant end of the train car and Justin’s face. “Hurry. Look! What can you make out?” The heavier boy didn’t let up on the railroad whiz. Justin clenched his teeth and felt his left leg spasming. He couldn’t even open his eyes, let alone lift his body to get a view of the layout of the tracks as Red wanted. But he still sensed the great distance to the ground, not to mention the deadly speed. Justin froze, terrified of the height.

The train rushed on with the two teens still on top. Finally, Justin fixed his eyes on Red’s face. It was the only spot not swirling. Again, Red’s attention was divided between watching the end of the roof and the boy he pinned down. Justin watched as Red bit his lip. A tiny drop of scarlet blood trickled down on to the pale boy’s chin. He’s afraid of something.

Adrenaline pumping, Justin’s throat thundered, “Shut up. No, not for a liar like you!” He spit the words out at Red. With anger and adrenaline coursing through him, Justin pushed against Red trying to flip him, but Red had all of his weight on him. Red, eyes steeled and focused, still looked at Justin’s face.

The train traveled southwest, climbing slightly in elevation. The boys rolled a quarter turn and both planted their palms on the hot roof, ignoring the hot surface.

An old road ran along the left side of the train. Then, Red could see a great canyon, which the Colorado River ran through. The great canyon had tertiary canyons off of it. From a bird’s eye view, the plateau looked like an arrowhead with notched edges. The train came near to an edge which dropped off a thousand feet into a canyon directly to the left of the road. Red looked down and saw a trail crisscrossing the tertiary canyon. Now, he could no longer see it as the train speed on. Justin and Red continued to struggle on the roof, like wrestlers, Red still dominating Justin.

Red punched the spot of the poker burn that he had given the railroad whiz to get him to climb the ladder onto the roof.

Justin’s eyes bolted wide open. He let out a short scream, while a distant sound also reached their ears. Could it be an echo from the scream? A thin high screak from the backside of the train car reached their ears. There was nothing out here on this “island in the sky,” on this high plateau. Probably a bird, Justin thought. The train continued to slowly rise in elevation through a secluded grassy pasture.

The verdant pasture grew in his mind and Justin went to his happy spot, remembering his family’s pasture at home. He loved the evenings, when the sun just set, casting a golden shower of light on the serene pasture. His soft horse Trixie under him. He would pet the soft luxurious tan coat on her neck. He loved how her neigh sounded as if to say, “Ah that’s the right spot. Don’t stop.” The irrigated pasture ground and grass cushioned the steps of her prancing hooves. He chewed on mustard grass and smacked his tongue against his lips, enjoying the sour taste. The smell of grass drew his attention. The cat lurked in the grass and held a field mouse in its mouth. The soft mooing of the cows in the distant corral brought home memories of his parents’ ranch. Squawks of the mockingbirds on the hurricane fence around the yard echoed. Penned in the yard, the dogs wouldn’t bother them. They rode for hours in the pasture before this— before the nightmare on the train.

Higher on this mesa they rolled. Justin could see the canyon now, not three yards on their left. Since the train had been traveling straight, he couldn’t tell, that the train rode on a trestle now over the end of a tertiary canyon. He averted his eyes from the ground- his body trembling. Red’s mouth dropped open as he looked down a thousand feet below to the old trail at the bottom of this canyon.

The train descended into a small eroded bowl. Ugh. Justin felt his stomach rise into his throat. Now, Justin could see an approaching white and red sandstone arch spanning the locomotive. The arch was almost over them, with only two feet of clearance.

“Duck!” Justin yelled up at Red and dropped his head and hands flat against the scalding roof.

Justin watched the arch against the sky as they and the train sped under it. It looked like the train was flying in the air over the canyon. Exhausted, Justin laid flat on his back looking up at the sky. Maybe this battle of will and fear ended with the arch taking out Red. Then, he felt hands on his arms and Red between his legs. The pressure of Red’s pink and freckled hands increased on Justin’s tan arms as Red once more pinned him, biceps bulging from the cut off biker jacket.

A page-turning thriller and ultimate escape game, this book is about Justin Wayne, a whiz kid who is kidnapped and entrapped on a speeding train. A forcefield and metal monsters, they call Screakers keep them from escaping. Can the players keep their secrets? Will the teens get to the Hidden End of the Line alive? Will the nightmare of The Beast that has them on board ever be over?

I have extensive training. My first Master’s degree is in Education. I have held secondary teaching credentials in Social Studies. I am working on a second Masters in History and plan to create an exhibit on Patience Loader Rozsa’s Utah Territory. I will graduate in June 2020. I have taught English to Deaf youth, homeschooled and continue to work with youth. I started writing young adult fiction while teaching high school American Sign Language and raising two teens. I want to pass on my love for learning and reading to the young adults who read my books. I love fiction books of the genres of Dystopia and Historical Fiction. I live in Lehi, Utah with a daughter, son, and husband. In my free time, I dress in period attire for historical reenactments.