Prime Numbers Proof and Journey Finding the Fingerprint of God 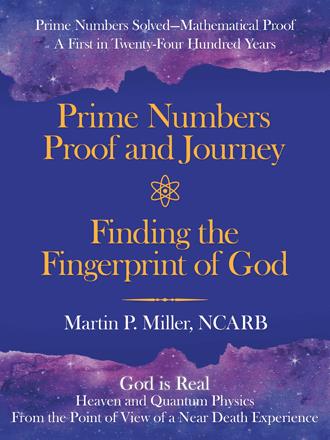 Currently the mathematical formula to separate prime numbers from composite numbers is unknown, and this book describes how order is discovered in the randomness, by the newly discovered Unit Matrix Primes. Presently, prime numbers are known to be random with no natural logarithm, or order to describe the distribution. This book, “Prime Numbers Proof and Journey – Finding the Fingerprint of God” proves prime numbers sequence every three rows with Unit Matrix Prime quotients, they provide even distribution; primes are not random, have predictable “white and gray negative spaces” that are composite whole numbers. The math that solves the spacing of primes is simple division with the algorithm of Unit Matrix Primes. Mathematicians working on number theory sought to solve the randomness of prime numbers since Euclid proved that prime numbers were infinite 2,400 years ago. Chapter one discusses the question, why study prime numbers, and did God throw dice placing them. Certainly, looks like it, I’d say possibly the work of a three-year-old with randomness everywhere. May we ask the question, why can’t we see the order in prime numbers. We know most of nature is very complex, are prime numbers so complex that “man” has not figured them out for thousands of years. The Fibonacci Sequence is certainly complex as found in nature, trees, galaxies, and shells; which all have a spiral sequence of 0, 1, 1, 2, 3, 5, 8, 13, and so on. While the Golden Ratio (1 to 6.18) matches features of the human face and nature. The ancients knew quite a bit about math and numbers, they constructed pyramids all over the world, kept track of farming yields, calculated astronomical positions of planets and stars, understood moon cycles, calculated equinoxes, and much more. In the past three thousand years, the understanding of mathematics has made great strides, and has become part of our advancing technology, improving our daily lives. Chapter two discusses God’s fingerprint and how to find it; and how to seek out hidden ideas. One way to do that, is to ask questions and study. We are all capable of finding answers to the unknown and forging through the unfamiliar. As a young child my quest to solve the impossible prime number randomness was with a table, a table that fifty years later became the answer; what solved the impossible was persistence and time. The number 3 was the fingerprint to look for in solving prime numbers, the find was very significant and the number 3 is everywhere. Chapter Three searches to find order in chaos, rhythm in randomness, and the fingerprints of God. We explore God’s fingerprints in nature, in our DNA, in an atom, in a photon, in the universal language of mathematics, can we find the fingerprint of a creator. Is light just a shining sun, is a feeling just a fading sensation, is it possible to interpret faith without science, or could it be that science has not yet been able to explain the phenomenon of faith? Can thermodynamics describe heaven’s energy in a way that predicts a sole? One section of the book discusses our spiritual makeup. An atom has a proton neutron and electron, equally three parts. The proton and neutron each encompass 3 quarks, and 3 gluons, all prime numbers. The periodic table mentions the atomic mass of each element or atomic number of combined protons and neutrons. Mass is different from weight, weight describes mass with the pull of gravity on it, and the implied description of mass and weight as a solid, may not be correct. This is a remnant from the ancient Greeks, the idea of mass as a solid. Some physicists report the atom is energy with no point “solid” mass. Mass is electromagnetic energy in pounds, a unit of measure with no gravity. Keep in mind electromagnetic fields produce a flux, just like that produced by electric motors, or magnets, and each energizes an area around it. That is how we produce electricity, with magnetic fields moving past a wire. In the atoms the gluons have a strong force, while the proton and neutron have a weak force holding them together. Hydrogen has an atomic mass of 1.007825 u., which converts to a unit of energy, see example in Figure 11 for mass to energy conversion E=mc2. I have always presumed atoms to be 100% electromagnetic, which implies a spiritual make-up. The body is electromagnetic, held together by electromagnetic forces, and those forces attract and repel other atoms, molecules, and cells. The attraction of “electromagnetic forces” in atoms are sometimes called “chemical reactions”. Chapter Four is a near-death experience explained with possible scientific solutions: what is the bright light in heaven, how are feelings transmitted; something we can feel, but not see or touch, can we travel backwards in time and rewrite history, what is a brilliant white floating sphere, what are dreams and can they tell us anything. Can prime numbers randomness be similar to life’s experiences with an underlying order.

Most of nature is complex, are prime numbers so complex that we cannot solve them. Martin P. Miller, a nationally certified architect, seeks to answer that question and others in this mathematical and philosophical work that reveals the fingerprints of God on multiple levels. He shares how as a young child, he made a table that fifty years later solved prime numbers. After watching a CD on the history of mathematics, he decided to solve what everyone said was the randomness of prime numbers. The number three – which is everywhere – proved very significant. Miller also shares a near-death experience and seeks to answer questions such as: • Why is there bright light in heaven? • Can we travel backward in time and rewrite history? • What are dreams and what do they mean? • Can the seeming randomness of prime numbers be similar to life’s experiences? Throughout the book, the author seeks to find order in chaos, rhythm in randomness, and the fingerprints of God – finding proof of his existence in nature, in our DNA, and in the universal language of mathematics.

Martin P. Miller is a nationally certified architect and a graduate of the University of Illinois at Chicago. He won a number of awards, including a faculty citation for academic work and a lifetime membership with the Golden Key National Honor Society. He has three patents from the United States Patent and Trademark Office for a new type of construction that can be assembled by two people with no heavy equipment and is hurricane, mold, and fire resistant. Innovated a new type of electrical green energy generator, modular food and fish hydroponics bay, and a whole house water purification unit.