SHADOWS FROM THE HORIZON 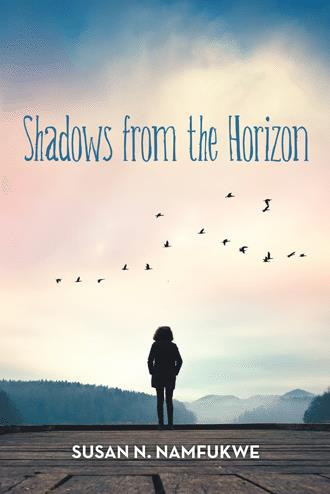 Sam emerged from the plane feeling so carefree. He had been told that his problem, which had sent him scampering had been taken care of. But who was that girl standing next to his wife? Wasn’t that the girl he was dreading to meet? What happened? He thought John had told him that he had taken care of business, what happened? He was getting more confused as he kept walking towards the exit. His mind was racing. Someone at least could have warned him that she was still there; maybe then he could have known what to do. He could have prepared his mind.
Where Njavwa was standing, she wished the ground could open up and swallow her before Sam could reach them. She didn’t know how she would face him. Hence she kept fidgeting. Her mother was too excited to notice what was happening around her. Mwaka’s heart on the other hand was pumping like a racing machine. Finally, she was meeting the man she had waited all her life to meet. Her gaze was intently planted on him, trying to see whether the memory she had of him was real. The moment was finally here!
After being cleared by the airport authorities, Sam started walking toward his family with a grin on his face. He was holding his leather coat in one hand, a laptop bag on his shoulder, and pulling a hand luggage in his other hand. As he was walking toward them, Njavwa thought he was walking in slow motion with his eyes fixed on her. When he was just a few meters away from them, he clutched his chest and knelt down as if in pain. The things he was holding in his hand scattered about. As his mind was racing, his heart also starting racing thereby his blood pressure shot, causing the heart to malfunction. He collapsed. Emergency services were alerted; the medical team was there in no time, and before they knew it, the ambulance was wheeling at full speed to the hospital.
They were all confused, Things had happened so fast that they did not know what to do next. How Njavwa’s mother jumped into that ambulance no one could remember; they just found that their mother had gone and they had been left, dazed.
Mwaka was very disappointed at the turn of events. She felt so frustrated; she had come this close to meeting her real father and this happened.....

In an intriguing and exciting story, Njavwa a young lady and also a school girl gets a lift from a stranger on her way to the boarding school. As fate has it, she falls in love with this stranger. In another twist of fate, she comes to learn that the stranger would soon become her mother’s husband. This same stranger also turns out to be her best friend’s estranged dad. The turn of events create a tragedy that tears the family to pieces.

MORAL OF THE STORY : For every decision you make today. Serious consequences whether good or bad awaits you tomorrow.

A natural born writer, Susan N. Namfukwe was born and bred in Zambia. Currently working in the public sector, Susan enjoys reading and writing in her spare time. She holds a Degree in Development Studies and currently pursuing further studies. Susan Namfukwe resides in Lusaka, Zambia with her family.