From Covered Wagon to Eighteen Wheeler

A Legacy of Life Lessons For Shoe Leather Living 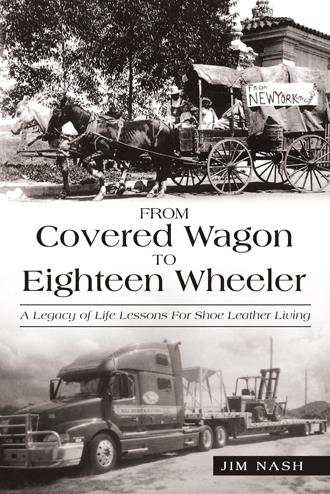 “The mare came past me, bucking up a storm. Smaller items were flying out of the panniers (large canvas bags used to carry items on a decker.....a pack saddle) as she bounced her way beyond me. She had broken the pigging string (small rope used to connect a pack string of horses together), and was doing her best to get rid of her load.”
*. *. *

“I instantly froze in my tracks! I had been pretty skeptical about sneaking up on an elk with the snow conditions the way they were. It had snowed 6 inches the day before.....and the sun had come out.....melting the top inch of snow. It had frozen again, and with every step, I crunched snow.....crunch.....crunch.....crunch.

“With eyes wide open, and walking very slowly, I inched my way through the timber. There were small clearings here and there, and it was on the edge of one of those clearings that I froze.”
*. *. *

“The day before I had told Anita that a truck had slid backwards down a hill.....had gone over the bank and killed the driver. But....not to worry.....had driven this road in worse conditions.....and never had a problem.”

“Two thirds of the way up the hill.....we powered out! There was no gear I could catch in time, to get us up that hill.....and if I could have.....the 26 tires were not going to hold us from sliding backwards.....over the embankment”

“The next thing I saw were three lanes of traffic.....ALL at a total stop. I’d crested one of those monotonous hills.....and all I could see were stopped vehicles.....as far a the eye could see.”

“I was bearing down incredibly fast on the last car in that long line of impatient motorists. My heart raced.....my mind said.....’do something.....but don’t hit the brakes again.’”

If you like short stories of real life events, coupled with a spiritual lift or challenge, then this is a book for you. From killing snakes; horse and hunting challenges; to the perils of driving a semi on ice and snow, the author brings the challenges of life, to the parallels of Godly living.

Born into a rich heritage in an African culture, Jim shares a legacy passed on by his missionary parents. Attending boarding school until the age of 10 gave way to exceptional experiences. He attended Christian schools and went on to graduate from Bible college.

While pastoring churches for 20 years, he took up his love of horses and hunting. Later, his commercial driving skills were challenged, for 2 million miles.

Having experienced both divorce and death of spouses, his gratitude for grace is shared with his compassion for fellow pilgrims on their way to perfection.....some day.

Now retired, he shares homes in Texas and Oregon with Anita, his wife. His six kids and 19 grandkids; and her 3 kids and 4 grandkids, make life and travel meaningful.....and writing vignettes, only adds to the fun.