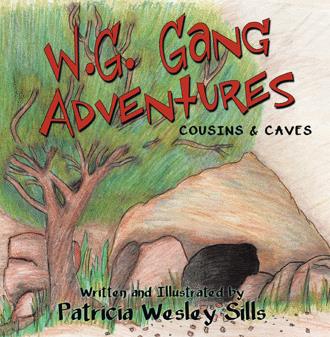 No one knew in the mountains of Missouri that there was a hidden secret just waiting to be discovered. Hank was playing fetch with a Golden Lab named Bo. Now Bo was excellent at playing fetch but got distracted when the ball rolled into the opening at the base of the mountain in the back yard of the cousins’ summer houses. When Bo didn’t return the ball, Hank went looking for him.
Hank could hear Bo barking but couldn’t see him. Hank went into the bushes and found an opening big enough for Bo and himself to crawl through. He found Bo barking in the dark cave. It was dark and spooky without a light to see around. He grabbed Bo and his collar and pulled him towards the opening.
Hank ran back with Bo and got his cousins to come see what Bo found. He got a flashlight from the kitchen drawer and they all headed back to the cave opening.
The W.G. Gang considered this a mystery for them to investigate. Who knew there was another world hidden inside the mountain? They planned to solve this mystery as they prepared to go into the cave.

What would you do if you found a huge cave in your backyard?
Explore it! That’s what the W.G. Gang did.

Patricia loves to tell stories. She wanted to leave her stories about her grandchildren for them to share with their children. She keeps up with new information on writing by classes about subjects of interest. She is 65 years old and beginning a new adventure herself.