With Sanctifying Grace… Speak Of Me 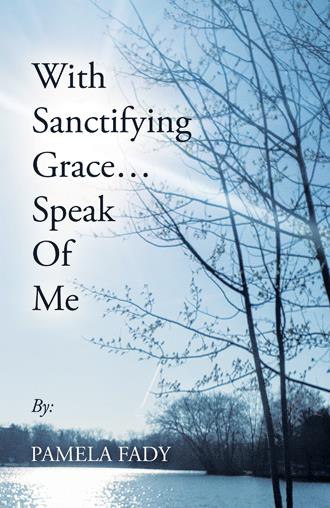 After the holidays, due to lack of money, stress reared its ugly head again. Nabil wanted to talk with his brother about a business partnership again. Life moved too fast. Nabil was overloaded, and I had my hands full with four children now. I was even busier once school let out for the summer vacation.
Ultimately, that summer quickly became a train wreck! I’ve earnestly prayed about what I’m about to reveal now. I was always instructed that personal marital problems should stay private. I should bury my problems and not let the whole world know. However, I don’t speak of my own accord. I speak now because God has directed me to do so.
Evil walked through my front door on a hot, sunny summer day in mid-July. I had just laid Yasmine down in her crib, and then I lay down for a brief rest on the couch. It was around 4:30 p.m. Before I knew it, my husband quietly walked into the family room. While he looked down at me menacingly, he asked me, “Whom are you having an affair with?”
At first, I chuckled oddly because I thought he was being silly. However, as he loomed over me, I realized he wasn’t joking. I replied with a firm and serious calm, “Nobody.” I sat up in bewilderment and listened to his outrageous tirade. That wicked accusation came out of left field. I angrily wondered how he had come to that absurd idea.
At that point, the discussion quickly became heated and loud as I fiercely tried to defend myself. Exasperated, I slowly but surely went into shock. As the minutes passed, conversation with him became impossible. I became aware and concerned for the children, and for myself. Nabil was abnormal, to say the least. I couldn’t recognize who he was at that point!
Eventually, I realized I had to get dinner ready. I told him we would finish our discussion privately, after the children had gone to sleep. It wasn’t until 10:00 p.m. that we were able to resume that discussion. However, at one point I became fearful, so I called a trustworthy family member.
While we waited on his arrival, I sadly realized our marriage was attacked by an evil force. I was devastated with his accusation. The very man that I believed God intended for me in this life had accused me of infidelity after we had our fourth child. Our youngest was eleven months old. Seventeen years of marriage, rocky as it was at times, had not prepared me for the battle that was before me.
Over the next few months, Nabil and I sought Christian marital counseling. Everything I felt God blessed us with as a family up to now was pointless. Why would God allow that evil, and for what purpose? How were we to survive as a couple, and furthermore as a family? Our world spun off its axis!
We attended church faithfully every week as much as possible. We were good, hard-working people. In my innocence, I listened to the counselor. I went along with whatever solutions Nabil felt he needed. I wanted to help him, not hurt him. At that point, I was afraid for Nabil.I felt guilt over my actions from prior years that may have brought him any type of unwarranted grief. Like any other wife, I was stubborn and self-righteous at times. I wanted my voice to be heard and respected. Sometimes, I deliberately chose not to listen to his voice of authority as the head of our household. My steps were now heavy with that weight.He made me walk it out as if I was guilty of that accusation! When I would make little mistakes due to the stress of it all, I’d find myself back to square one with Nabil. During those moments, I didn’t know who he was anymore. I couldn’t see the light at the end of the tunnel. I desperately wanted off that crazy train. I wanted deliverance, and it was obvious to me it wasn’t coming from Nabil anytime soon.
In despair, I turned to God and offered my complete surrender because I no longer felt the desire to live. In my brokenness, I gave God my life in a way like never before. If God wanted anything from me, He would have to breathe new life and strength into me. He had to help me carry the cross that He had given me!
One day, when I was home alone, I emptied myself while I lay prostrate on my bedroom floor before the statue of the Blessed Mother. I lay there for a long time in tormented conversation with my Creator. I expressed my extreme grief over the condemnation and suffering I faced. I sobbed uncontrollably over the love that was destroyed between Nabil and me. Our lives would never be the same.
My family was destroyed not only by the power of our own doing but also of evil forces. The tears endlessly poured down my face while I was in whispered prayer. All the while, God held me in my heartbreak. Finally spent, I faithfully reached out and took His offer of saving grace.I gave Jesus my heart as He blanketed me with His love. His strength united with mine. His wisdom commanded me to rise in the ashes of my life. I understood that only He could help me. I left my sorrow at the foot of that cross knowing that for better or worse, I would never be the same.
There was a song on the radio at that time that spoke to my sorrow: “Sweetly Broken” by Jeremy Riddle. For the longest time, that song brought me to my knees every time I heard it. My world stood still for those four minutes while I mourned. Also, I mourned for Christ, who also had to carry His cross by the will of His Father.

While enduring challenges and sorrows in her marriage of nearly three decades while trying to embrace their cultural differences with joy, Pamela Fady eventually realized that love, in all its glory, has many facets.

In a retelling of her marital journey, Fady begins by disclosing how her path first crossed with a handsome, reserved young man of Lebanese descent who lived seven thousand miles away, and then leads others through their joined experiences as she, a devout Christian, blended her life with a Catholic reluctant to talk about his faith. As she reveals how she eventually became a Catholic and prayed to find a more unified spiritual path as husband and wife, Fady shares insight into how married couples, even when they are united as one, can be driven apart by deep wounds. Throughout her story of love, hope, forgiveness, and healing, Fady reminds all of us that God is always here to provide everlasting love and mercy.

With Sanctifying Grace … Speak of Me is the story of an American woman’s marital journey with a Lebanese man while living in Christian faith, through all its joys and sorrows.

Pamela Fady was born and raised in Columbus, Ohio, where she lived with three generations under one roof and dreamed of one day becoming a pediatrician. Today, she has many worthy divine experiences to her credit and is honored to share her journey of family and faith with her readers.