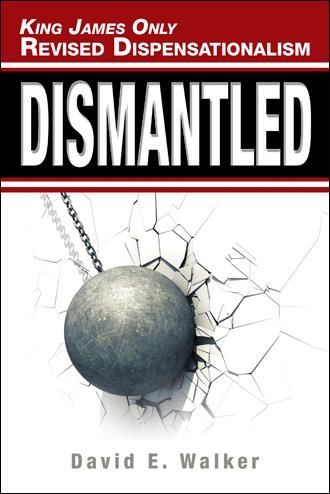 Bible-believing (KJV only) dispensationalism, as a movement, was a reaction to this revised dispensationalism apostasy much like the fundamentalist movement was a counter to modernism. To the Bible believer, the logical conclusions of “rightly dividing” were only as good as the Bible itself. Inspiration was correctly understood to not merely apply to the original manuscripts, but to an actual book that can be studied (2 Timothy 2:15) — the King James Authorized Version. This meant that “pastor popes who privately interpreted the scripture with their cute sayings” could be challenged because the power was in the word of God, not the word of men. This further led to honestly approaching the Bible in humble belief as a student, not a scholar. The outcome was an ardent belief in dispensational salvation — that salvation conditions are different, regardless of what scholarship says or has said in the past.
The King James Only (KJO) movement and this brand of dispensationalism are inseparably linked. Unfortunately, some King James only preachers and authors today are espousing revised or normative dispensationalism. They side theologically with Bible correctors, assuming the distinguishing differences between Israel and the church are only ecclesiological (dealing with the church), or eschatological (dealing with prophecy), and not soteriological (dealing with salvation). In other words, they claim that even “under the Old Testament law…salvation was available to the sinner…not by the works of the law but by grace through faith.” They maintain, “in every age, salvation comes by faith and is offered and granted through grace.” These authors, by their own admission and obvious absence of quoted source material, or very limited references in their books, are very careful not to name the King James Only authors they are attempting to refute, or the apostates their ideas line up with. They piously profess to be “concerned with what is being taught, not with the men themselves,” and religiously follow certain “rules for writers” like “Eliminate quotations.”
These authors are specifically targeting Bible believers who have either espoused the truths of dispensational salvation personally or been taught it by their pastors. They are attempting to undermine true King James Only dispensationalism and are in effect reverting back to revised dispensationalism (Ryrie, Pentecost, LaHaye, et al.) at worst, or classical dispensationalism (Scofield, Larkin, Haldeman, Blackstone et al.) at best. These preachers and authors are advocating a King James Only (KJO) brand of revised dispensationalism — one that makes no distinction between salvation differences throughout the various ages of human history.

Most believers raised in churches that contend for the King James Bible as the infallible word of God are familiar with 2 Timothy 2:15 and the idea of dispensationalism. In fact, most Bible believers are so familiar with their Scofield Reference Bibles they can tell you which side of the page a certain passage is on from memory. For many Bible believers, dispensationalism, as a theological system, answers so called “problem passages” that clearly teach salvation by means other than “by grace…through faith” in the finished work of Jesus Christ. At the same time, many King James Only believers remain unsettled or unsure about the differences in salvation under the various dispensations. Their pastors may not emphasize or teach these distinctions, or they may have fallen prey to King James Only preachers and authors who teach just the opposite. Some of these authors have been teaching this faulty dispensational position for years while others have more recently modified this as their position.

In this booklet we will briefly trace the development of dispensationalism as it relates to salvation under the various dispensations. We will show that the dispensationalism being taught by many King James Only preachers and authors is nothing more than a revised dispensational position rooted in Calvinism. We will also dismantle the faulty premises of this revised position by addressing the major points and examining their books in light of the Book.

Dr. David E. Walker (B.D., Th.M., Th.D.) is the pastor of Calvary Baptist Church in Monticello, Florida. He also serves as the dean of students for The Bible Doctrine Institute. He has written books covering both basic and advanced Bible topics.