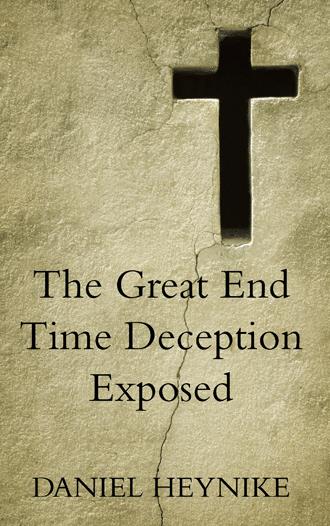 CHAPTER 3: A TIME ORDERED SUMMARY OF MY FINDINGS

2. The Antichrist will agree a 7 year peace treaty with Israel which will allow the Israelis to build the 3rd temple or at least Moses’ Tent of Meeting.

3. In the middle of this 7 year period the Antichrist will cancel the agreement and place the abomination of desolation idol in the Jewish temple. (Matt 24:15: “stand in the holy place”).

4. This is the sign of the ‘END OF THE AGE’ and causes an immediate reaction from God. This is where Jesus says to his disciples in Matt 24:17 that they will not even have time to fetch their clothes in the house before God’s wrath is poured out on Jerusalem and Judea.

5. It is the time of the final judgement when the wrath of God is poured out on the earth and is also the time of the rapture. The rapture is therefore very close to or at the same time as the final judgement. We know however, that the rapture will precede the END TIME SIGNS of the judgement to come on all the earth because we know that when Jesus appears in the sky to collect his elect he comes like a thief in the night. (Luke 12:40)

6. The GREATEST GLOBAL TRIBULATION EVER begins with the appearance of the abomination of desolation idol in the holy place of the Jewish temple.

7. The end of the GREATEST GLOBAL TRIBULATION EVER comes after about 3.5 years, but the precise end time is not clear. We know that God has shortened this period because otherwise no one would have survived (Matt 24:22) and we are told in Dan 12:11 that a time of 1290 days (43 months) will be counted after the start of The GREATEST GLOBAL TRIBULATION EVER begins. While this looks to be the end, verse 12 seems to contradict this saying that those who “wait” (survive) till the 1335th day (a further 45 days) will count themselves blessed.

8. After the end of the GREATEST TRIBULATION EVER the signs of the Lord’s second coming are displayed and then he appears in the sky and the millennium, the 1000 years of peace on earth begins. Matt 24v 29: says “Immediately after the tribulation of those days shall the sun be darkened, and the moon shall not give her light, and the stars shall fall from heaven, and the powers of the heavens shall be shaken: 30: And then shall appear the sign of the Son of man in heaven: and then shall all the tribes of the earth mourn, and they shall see the Son of man coming in the clouds of heaven with power and great glory.”

The main conclusion of this study is there is NO so called 7 year period of great tribulation that all Christians will escape because the rapture will precede it.

Note that this book has been written from the Christian point of view and therefore does not illuminate the End Times Events affecting only the Jews. Its main purpose is to reveal the deception currently circulating from imminent bible preachers that all Christians will escape the 7 YEAR GREAT TRIBULATION by being raptured before it happens. I have found that there is no 7 YEAR GREAT TRIBULATION but only a constantly increasing persecution of Christian believers from the beheading of John the Baptist to the worst of all persecutions which occurs during our last 3 and a half years on earth. This happens when the Antichrist makes a seven year peace covenant with the Jews in Jerusalem and then concentrates his hate and anger on all believing Christians. They are raptured without warning 3.5 years later at the time the Antichrist erects the abomination of desolation idol in the new Jewish temple/tent . This causes God to terminate man and Satan’s rule over all the earth, bringing about the END OF THIS AGE. His wrath is then poured out on all the earth.

All Christians therefore need to know that there will be no easy ride and that their faith will be tested till the last day. They will just have to trust the Lord and hang in there till the rapture occurs.

The author came to know the Lord Jesus Christ as his savior in 1978 and since then has attended various bible believing churches including a Messianic church. His initial calling was to the unsaved and since he worked a half hour’s drive out of town he was led to pick up hitch hikers and witness to them. This was remarkably successful, and many came to know Jesus. After maturing spiritually, he started leading bible studies at work and preached at a local church. At this time his calling changed to shepherding the saved and he also began to read Revelations because he wanted to know how it would all end. As he listened to the most imminent bible teachers on TV preaching about the End Times he began to feel the Holy Spirit saying that they were not telling the whole truth. And so, he began a 10 year End Times Bible Study to confirm if he was hearing the Holy Spirit correctly. This book is the outcome of this study and is a warning to Christians of an insidious deception being preached by most of the esteemed televison preachers of today and which could easily rob them of their salvation.

The author was born in Queenstown in the Eastern Cape in South Africa in 1944. He attended schools in Umtata and Cape Town, where he matriculated. He then did his military service in the South African Navy. He acquired a Bsc Degree in Civil Engineering and a Master’s Degree in Mechanical Engineering from the University of Cape Town. He has worked in South Africa as a consulting engineer, a company manager, at various municipal authorities and the Transvaal Provincial Administration where he was awarded their highest award for meritorious service. He is now retired and living in Cape Town.