Bad To The Bone Enraptured by Love 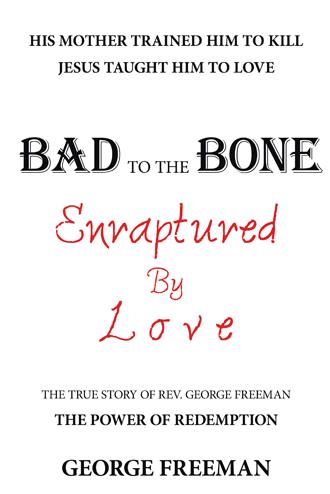 This is not the story of a gang member from Los Angles or the Bronx. George Freeman was not like Ted Bundy; the killer from Alaska or the Green River killer, but his mother was training him just as their mother’s had trained them.
He was just a young man as any boy that would be a friend to your son, or who would be interested in your daughter. He was just the boy next door. The young man from down the street. But he had a dark secret, he was full of hate. A genie in a bottle waiting to explode, and he hated women most of all. From the age of five he had been taught to hate; his mother was training him to kill.
The question you are asking me is why would any mother train her son to kill? The next question then is how do mothers teach their sons to hate, and especially to hate women, and to want to kill them?
Well hang around a while and see how his mother did it to him.
You know what the Scripture says. “Train up a child in the way he should go and when he is old, he will not depart from it.” Prov. 22:6.

“In Bad to the Bone”. You will find the real reason so many of our youth have gotten into sex, drugs and alcohol. Why many have become LGBTQ.

It is not because they were born that way; IT IS BECAUSE OF BAD PARENTING When you torment a child day after day and year after year, Some kill others some become rapist’s Some get so confused that they don’t know who or what they are. In BAD TO THE BONE you will find that JESUS is the best help you can get to keep you from being BAD TO THE BONE..

Rev. Freeman has written a very detailed and unequivocal book on his life as a young boy, living under the influence of the anger and abuse heaped upon his father and himself by his mother; which led him into a life of rebellion and violence. Then he reveals how Jesus came to him and caused a three hundred and sixty degree turn around in his life; which caused him to put down the gun and take up the Bible. He describes in detail how his faith in god made him the person he is today. A husband of 57 years; father of two fine sons; four wonderful grand-children and a respected minister of the gospel.
I highly recommend “Bad to the Bone” as a testimony of how you can get beyond the pain of the abuse from your past. Dr. Freeman serves as chairman of our Board of Directors of CMU Theological University.
Dr. Sharon Finney, Th.D. Academic Dean of CMU Theological University