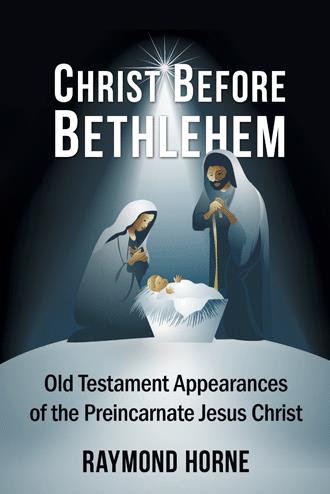 My favorite time of the year is the Christmas season. I love the focus Christmas gives to the birth of Jesus Christ. One of my favorite Christmas carols is a beautiful Appalachian ballad written by William Howard Doane (1832-1915, entitled “Christ Was Born in Bethlehem.” The first verse says: "Christ was born in Bethlehem, Christ was born in Bethlehem. Christ was born in Bethlehem and in a manger lay. And in a manger lay, and in a manger lay,
Christ was born in Bethlehem and in a manger lay."
Yes, Christ was born in Bethlehem and in a manger lay, but Christ’s existence didn’t begin with His coming to this earth as a baby in Bethlehem. Christ existed before Bethlehem, The Apostle John emphasized this in the beginning of his gospel: “In the beginning was the Word (Jesus), and the Word was with God, and the Word was God. He was in the beginning with God. All things were made through Him, and without Him nothing was made that was made” (John 1:1-3).
The Apostle Paul also affirms this truth in the book of Colossians: “The Son is the image of the invisible God, the firstborn over all creation. For in him all things were created: things in heaven and on earth, visible and invisible, whether thrones or powers or rulers or authorities; all things have been created through him and for him. He is before all things, and in him all things hold together” (Colossians 1:15-17).
Jesus was present at the beginning of creation. He was and is our creator. His pre-existence is further affirmed by His many appearances documented throughout the Old Testament. Theophany is a theological word that refers to an encounter with God prior to Christ’s incarnation.
The Holman Bible Dictionary tells us that “The phenomena of theophanies were temporary, for the occasion that required them, and then disappeared. On the other hand, in the incarnate Christ His deity and humanity were joined, not for time alone, but for eternity.”
However, in the early days of humanity, before men had the written Word, before the incarnation, and before the Holy Spirit had come to make his abode in human hearts, God sometimes appeared and talked with men. Before man sinned, he walked and talked with God, but after sin entered, Adam and his wife hid when they heard the voice of God (Genesis 3:8). God spoke to Cain (Genesis 4); Enoch (Genesis 5:24) and Noah “walked with God” (Genesis 6:9). There is good reason to think that theophanies before the incarnation of Christ were in fact visible manifestations of the pre-incarnate Son of God. It is to be noticed that Theophanies ceased with the incarnation of our Lord.
So, only in the Old Testament economy did God’s people need a theophany; since the incarnation, there is no such necessity. The New Testament doctrine of God is final and complete. God is always present in the risen Christ and the Holy Spirit. Still, at times, God’s people are more aware of that Presence than at others.”
The word theophany is a combination of 2 Greek words, “theos” which means “God” and “epiphaneia” which means “a shining forth,” or “appearance.”
A Christophany is specifically an Old Testament appearance of Christ, the second person of the Trinity. Since no one has seen or can see God the Father (Exodus 33:20; John 1:18, 5:37, 6:46; 1 Timothy 6:15–16), most theologians believe the times in the Old Testament where God is “seen” refer to Jesus.
Dr. John Walvoord in his great book, “Jesus Christ Our Lord,” makes the following statement about these Old Testament appearances: “It is safe to assume that every visible manifestation of God in bodily form in the Old Testament is to be identified with the Lord Jesus Christ.”
There has only ever been one incarnation of God, Jesus of Nazareth, and there is no other. Incarnation meaning: truly the fruit of a woman's womb, i.e. fully human, and yet truly God Almighty....for in him dwells all the fullness of the Godhead bodily (Colossians 2:9).
Yet the people who saw these appearances believed that they were seeing God and hearing His voice, not angels.

EXAMPLE: Abraham's experience with the 3 men, described in Genesis 18. He clearly tells of The Lord speaking with him face to face, as a man; and a man who sat with him and shared a meal with him, and after talking He walked off.

EXAMPLE: Joshua fell down and worshipped an 'angel', and the 'angel' didn't forbid him from worshipping him, which he should have done if he was only an angel, (Joshua 5:14,15).

EXAMPLE: Gideon said that he spoke with the angel of the Lord, (Judges 6:11-24), yet he refers to the words of the 'angel' as being The Lord's voice. Angel means messenger, so, whilst the Son of God is not an angel, those who witnessed his appearances were not wrong in saying that he was a messenger/angel of God, (while he's not an angel).

EXAMPLE: Moses at the burning bush, in Exodus 3. In chapters 23,32, and 33 God tells Moses that He will send His angel before him, and that He had put His name in him.

Isaiah 63:9 tells us, “and the angel of His presence saved them (the Israelites); in His love and in His pity, He redeemed them; and He bare them, and carried them all the days of old.”

EXAMPLE: The 4th man of Daniel 3:25.
”I see four men loose, walking in the midst of the fire, and they have no hurt; and the form of the fourth is like the Son of God. Who told Nebuchadnezzar that there was a Son of God?”
God has always been vitally interested in the affairs of men on earth. He is so interested, in fact, that he has appeared numerous times to help mankind in his fight against evil. Our Lord Jesus, Himself, appeared on earth before He came as a baby in Bethlehem.

John F. Walvoord, Christian theologian, pastor, and president of Dallas Theological Seminary believed and taught that “It is safe to assume that every visible manifestation of God in bodily form in the Old Testament is to be identified with the Lord Jesus Christ.”

Raymond Horne has served as a pastor, missionary and professor for over 50 years. He has ministered extensively overseas, preaching and teaching in Africa, Australia and Europe.  You will find his teaching true to the faith and practical for everyday living. He received his B.A. from Belmont University and his M.A. and Doctor of Ministry degrees from Southwestern Baptist Theological Seminary in Fort Worth, Texas.