Living on the Edge

Risky Advice from a Senior Millennial 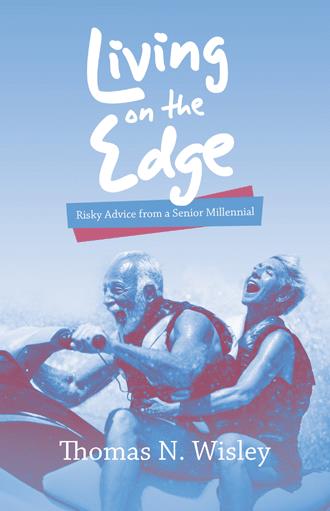 A Survivor, A Fiddler on the Roof!

There he sits, perched precariously on a rooftop, violin in hand, playing a haunting tune introducing the theme for the Fiddler on the Roof. It’s one of my favorite scenes that illustrates a life full of risk and adventure.

Would you agree that this illustrates reality for most of us? Is not life full of calculated risks? Boarding an airplane for an extended flight?; driving 75 mph on a crowded freeway?; embarking on an academic program?; marriage? Birthing children? Starting out on a new job opportunity?

The TV program “Survivor” is a metaphor describing what I mean. It was wildly popular for a time and exemplified a lust for danger and adventure. People were portrayed as survivors in supposed primitive and dangerous environments. Young strong bodies were pitted against the forces of nature. Members of the team had as one of their goals to discredit other members of the team, the idea being to vote people out of the community one by one. Intrigue and entrapment were common or order to eliminate members until only one remained, the sole survivor.

Several years ago I met a young man at a meeting in whom I sensed a sincere and open respect for my years of experience in cross cultural ministry,. Most young people, so it seemed to me, considered people over 70 to be “over the hill,” and on the downward slope. Indeed, people my own age often exude a similar attitude, that those of us nearing the bottom of the hill have little to offer.

Zach asked questions and seemed to be willing to wait for my meanderings through this experience until I eventually arrived at the core of his interest. I was impressed. One day he asked if I’d “mentor” him. Frankly I was surprised. Here was a twenty-something bright young man, articulate and intelligent asking me to be his mentor. What did I have to offer this young man? Nevertheless we agreed to meet.

Now, it should be known here that “mentoring” was not a new idea to me. In my role as a visiting facilitator with Development Associates International (DAI) one of the courses I facilitated is “Mentoring and Coaching for Leadership.” There had been others God had brought my way in counseling and mentoring relationships but none quite as direct as Zack’s request.

I felt a bit awkward. It seemed to me I needed to be mentored and Zach was a Millennial. He was not a secularized Millennial whom I had read and heard so many negative comments about, but a Millennial who had a graduate degree in Political Science and who was a self-confessed follower of Jesus. I suspected we had different political views but he seemed to be either disinterested what they were - whatever they might be. We committed ourselves to an open-ended mentoring relationship. In truth, my motives were a bit selfish; I wanted to know what made him tick. And I wanted to learn about the Christian Millennial world-view.

There’s more to say about that relationship but in summary we both learned that the stereotypes about each other’s generation though partly true were inaccurate in many ways. There was more to Zack’s Millennialism (was that a new virus?) than those articles and quips than was said from pulpits and lecterns. And I like to think that Zach learned more about the “Builders/Traditionalists” than he knew before our sessions together.

Living on the Edge is risky advice for living an adventurous life. I begin with a brief sketch about my life and the influences that took me in the direction it did. I discuss communication models and paradigms that have helped me live in cross-cultural risky environments. I learned to validate people without endorsing values that are counter to my own. I’ve learned how to create a space to put things I haven’t understood or about which I didn’t yet have enough information to make an informed decision. I’ve learned that it’s not a bad thing to be a “child of the light” in times of darkness. These and more comprise advice, some of it risky, I’d like to give my millennial friends.

I suggest that God is the great Recycler and that he doesn’t make junk, and there’s more.

Tom lived extensively in Southeast Asia with his family in Thailand, Cambodia, the Philippines and Japan. He and his wife Sandi started this adventure in cross cultural living and teaching in Thailand on the Thai/Lao/Cambodia border during the Vietnam war in 1966. They ended their journey in Japan teaching at Tokyo Christian University and Seminary. He has facilitated graduate level leadership development courses in Africa and India. In what he calls his most exciting adventure is their involvement mentoring Millennials. I love being one of them, in a sense, a Senior Millennial.

Tom and Sandi have been married 56 years and live in Tucson Arizona. They served as missionaries under the Christian & Missionary Alliance in Thailand and Cambodia in public health among people with Hanson’s disease, theological education, and refugee resettlement. He served as administrator and as faculty professor at the Alliance Biblical seminary in the Philippines. He held faculty positions at Biola University, Simpson University, Seattle Pacific University and at Tokyo Christian University. After retirement he and his wife facilitated courses under Development Associates International.

Blessed with 4 children (Daniel, Scott, Tami and Mike) they have 11 grandchildren, and 6 great grandchildren.

Tom holds a BA in Missions/Theology from Simpson University, an MA in Missiology and PhD in Intercultural Studies from Fuller Theological Seminary.

Being the most senior members at Redemption Tucson we enjoy an active serving community with many Millennials. Most every Sunday is an exciting ride in relevant contextual preaching through the relevant theological sand and surf and refreshing authentic worship.