From Sudden Death to Paradise

The Story of a Near-Death Experience 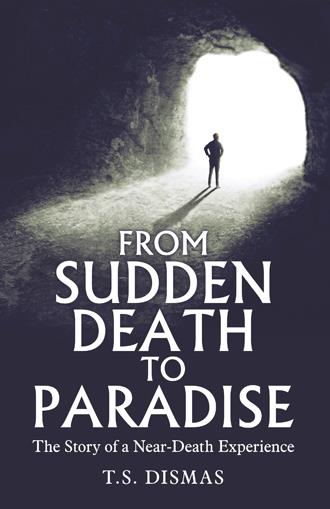 I felt myself continuing to physically drift off, slowly fading in my ability and desire to endure this fight for life. I couldn’t shut down mentally and just drift off to sleep, as I hoped I'd be able to, because even worse than the pain was that I couldn’t block out the noise and chaos of the hospital room. As thoughts (mostly regrets) kept racing through my head, I began to long for the pain to finally end. It seemed as if I was being attacked by these thoughts and they were trying to convince me I would not be accepted by God, but I could feel his presence with me the whole time, and his mercy and forgiveness were apparent.

As the doctors were talking, it sounded as if their voices were now moving away from me and coming from within a tunnel or a deep well. My eyes were still shut, because the blackness was more appealing than the view of the hospital room. The pain was intolerable, and every second felt like torture. I began to wonder how much longer I’d have to endure this. I was still concerned with what was going to happen next in the death process. I thought about how sad it would be to never see my family again and that I did not even have a chance to say goodbye, but I prayed for God to watch over Tina and kids in my absence and to help them through this.

I then I felt my body die. It was just like that. A split-second, and I went from being alive to being dead. I quickly realized that I never had any power over my life and even less control over my time with it. When death came, it felt like everything physical was abruptly shut off. In an instant, everything sensory was simply gone, like someone just hit the switch, and everything as I knew it physically was gone. The chaos was gone. The sound was gone. Taste was gone. Feeling was gone, thankfully, because I had been hurting so badly. The change in perception was drastic.

However, when my body died, my mind kept going, never stopping for even a second. I was conscious of everything that was happening to me, even how death felt. In fact, my consciousness grew immensely, and I had a more precise sense of awareness. The difference being that I was processing everything at a faster, clearer level of functioning. I knew I was still me, and I realized I never lost conscious thought for one instant, but I knew that I had died. It was incredible to go from chaos to death and to feel my consciousness grow in a split-second and to have all the negativity gone in that same span of time.

I know I cannot accurately explain the feeling of dying, but I’m going to try. It is obviously so hard to explain death to anyone who has not had this experience, because it was unlike any other life experience. People typically experience death only once; it’s usually the last experience we have. My physical existence, with my physical body, did stop, and all my human senses were gone instantly, but without a doubt, my spiritual existence continued. This new existence is beyond human understanding and makes any attempt at explanation difficult. It is even difficult for me to understand, and I experienced it. The knowledge of what had just happened with my physical body was very apparent to me but was not distressing. I wasn’t scared at all. What was continuing to happen to my soul was strange but somehow familiar and also extremely exciting at the same time.

As I realized that I had just died and was now unencumbered by the limitations my physical body had presented, everything became clearer to me. I felt my soul leave my body with a sudden shake and a quick pop, then everything abruptly became soundless and dark. It was like a blender suddenly being shut off. All of the noise, vibration, and chaos of life suddenly stopped; the relief was extreme and sudden. I was quickly ejected from my body. I immediately welcomed the silence after experiencing the chaos of the hospital room for so long. The pop seemed to break my soul free from the confines of my physical body and shook me free from the physical world. It was the strangest feeling I had ever experienced. I can only liken this experience to being born backwards, but it is probably more like when the soul is entering the human body at conception (but of course I don’t remember that experience, and this is only speculation).

My eyes were closed when I died, and it was dark prior to death, but it felt as if the shake and pop pulled me backwards, through and out of my physical body into a more serene and secure space and state of being. I instantly opened my eyes; it had now become tremendously dark and intensely quiet, and I immediately knew I had died. At the very moment of death, I was aware I had died; it did not have to be announced or proven to me. There was no confusion; it was obvious that I had just died. I simply knew my death as the obvious next step for my life, like waking up from a dream, the difference being I felt more alive now than I ever had in life.

I cannot stress enough that I never lost consciousness. I maintained continual awareness in my mind of what had happened and what was currently taking place. This was exciting to me because I knew I died, and I wasn’t afraid. In fact, I was extremely interested in what was happening. As a psychology geek, it was obvious to me that I had died due to the extreme changes I could perceive consciously, psychologically, and physically, but I remained the same mentally. I was now experiencing all my faculties and senses in a fully enhanced way. A profound feeling of amazement overcame me as I realized that I never lost consciousness, knowing that I was not dreaming and I could determine the precise moment I died and what it had felt like. I was also amazed with knowing what was happening to me now and that I was fully experiencing all the changes that had taken place and everything that was currently happening.

I was clearly and distinctly aware of my death, except now I had absolutely none of the fear, sadness, anger, or any other negative emotion experienced in life. Those emotions were gone the instant I had died, and because the peace I was experiencing was so powerful, I could not have recalled them even if I wanted to. I realized I had died and was somewhere else in that same instant. I went from the hospital room to a completely unfamiliar dimension. When I first opened my eyes………

It’s easy to take it all for granted and go through life feeling invincible—especially if you’ve spent your life successfully facing challenges, overcoming obstacles in the way, and working hard to improve yourself both mentally and physically. Yet for all of us, this feeling of invincibility is an illusion.

From Sudden Death to Paradise shares one man’s story of suddenly facing his mortality and coming to terms with what he experienced. After being exposed to toxic chemicals while in the military, and unknown to him, author T. S. Dismas developed an autoimmune disease that would kill him—one night, Dismas suffered sudden heart failure and died for ten minutes. Yet in that moment, he had a near-death experience and visited heaven, where he would learn a valuable lesson about himself, his life, his faith, and God.

No amount of suffering could take away his joy and peace, and after his experience, life was now sweet and truly a gift. With a new heart—both literally and spiritually—he was able to realize his previous life was not part of God’s plan, and that embracing God’s love is the only way to sustain happiness and find meaning in this life.

T. S. Dismas began his adult life by joining the US Army Military Police Corps straight out of high school; he served his country all over the world and was disabled due to injuries sustained during service. He then went on to obtain a master’s degree in counseling psychology and started working as a psychotherapist with other combat veterans in the Department of Veterans Affairs. Dismas has also worked as a program director and clinical supervisor with criminal offenders, and after joining a private company working with recently released offenders, he suffered a major heart failure. This was just the beginning of what his life would be like for the next couple of years.