Pursuing God’s Plan for Your Life 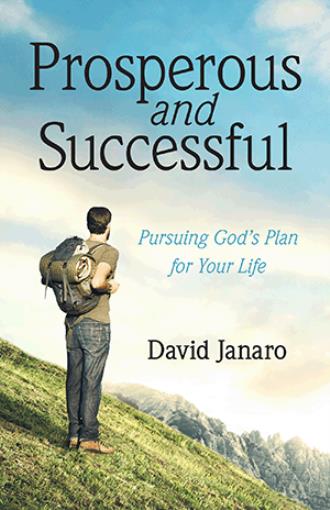 Keep this Book of the Law always on your lips; meditate on it day and night, so that you may be careful to do everything written in it. Then you will be prosperous and successful.

The first person to hear the Joshua 1:8 promise faced enormous pressures. Joshua was the newly appointed leader of a swarm of runaway slaves preparing for war. Only a narrow, meandering river separated him from some of the fiercest and well-fortified people in the ancient world. Countless men, women, and children were looking to him for leadership and strength. They had little military experience and no sophisticated weapons.

At that moment, God approached Joshua with special instructions that came with a guarantee of prosperity and success. Think about what an all-knowing God could have said. He could have shared winning strategies for siege warfare that no one else would think of for centuries. He could have told Joshua about the most important psychological principles for leading untrained soldiers into a fierce battle. He could have revealed the weakest points in the city’s walls and the best time to catch the guards in the middle of a shift change. God did none of that. Instead, he informed Joshua that he already had what he needed to guide him at this crucial moment. All the essential principles for success were explained in a new book Moses had recently finished writing under God’s guidance. “Follow this book,” God said, “and you will be prosperous and successful.”

Yes, that book. The one accused of promoting slavery and genocide. The backward book said to oppose science and progress, the usual suspect for charges of sexism, racism, and homophobia. A book containing lists of strange and archaic sounding laws, genealogies, and silly stories. Joshua could easily have responded, “Really? Is that all you’ve got? I need military strategy, and you’re offering me stories about Adam and Eve and talking snakes, and so forth? That just might make for an interesting bedtime story for my children, but now?”

Although the book Joshua held in his hands was a recent publication, it could easily seem just as irrelevant and unrelated to the daily challenges of life then as it does to us, living thirty-five hundred years later. And yet, the Bible claims throughout that it is the uniquely qualified guide to a prosperous and successful life. The promise appears again in different forms in the Psalms, Prophets, and the teachings of Jesus and Paul. The Joshua 1:8 promise is for us as well. Admittedly, the Bible is not the most obvious source of information for navigating the complexities of twenty-first-century life. But not everything that is true is immediately obvious.

The rest of the events recorded in the book of Joshua show how the promise became a reality in Joshua’s life. Although from a human standpoint, there was no reason to think that following God’s teaching would lead to success, it certainly did. God told Joshua to use an unusual military strategy to conquer the city of Jericho. It involved marching around the city, again and again, and blowing trumpets (not exactly a tried and true method of siege warfare).And yet, when Joshua and the Israelites obeyed, God gave them the victory (Joshua 6). In the next battle, the Israelites assumed they would have little trouble defeating the much smaller town of Ai. However, because they failed to follow God’s instructions, they faced humiliating defeat (Joshua 7).

At this point, you may wonder if Joshua was even a real person. Perhaps even more surprising is the claim that God actually gave this promise to Joshua. You may be thinking, God actually spoke to a real person named Joshua? And we know this? And this is actually relevant to my life? These are all great questions to ask, because following Joshua 1:8 is no simple task. The verse calls on us to think continuously about an admittedly strange-sounding ancient book, telling us to “meditate on it day and night.” Not only that, but it says we are actually supposed to “do everything written in it.” It’s hard to imagine a higher level of commitment. Anyone would be foolish to follow this verse without valid reasons for doing so.

And yet, what if it is true? I believe the Joshua 1:8 promise is true, and I believe it is the key to a successful life. My goal is to lead you to consider believing this as well and to learn how to use the Bible to guide you to success in every area of life. So this isn’t another success book. This is an endorsement and guide to another success book, the only necessary one ever written and the ultimate resource for life.

How the Bible Can Be the Ultimate Resource for Life

Is the Bible’s promise in Joshua 1:8 true? In order to find the answer, I think it is best to start with a more modest question. Is it even possible that it is true? For if it is not even possible, then there is no reason to go any further. If it is at least possible, then it is worth your time to evaluate the evidence and to at least consider the claims the Bible is making.

First, the Bible not only claims to be the ultimate guide to prosperity and success; it also claims to have the necessary ingredients to deliver on such a promise. The Bible claims to be the very words of God. According to the opening words of the book of Joshua, “After the death of Moses the servant of the Lord, the Lord said to Joshua son of Nun, Moses’ aide: ‘Moses my servant’” (Joshua 1:1).

The author of Joshua is telling us that everything in the eight verses that follow is an actual quote of the God who made the heavens and the earth. This includes the literally God-given secret to a successful life found in the eighth verse.

Keep this Book of the Law always on your lips; meditate on it day and night, so that you may be careful to do everything written in it. Then you will be prosperous and successful.
—Joshua 1:8

What if God told you exactly how you could have a prosperous and successful life? Is it possible he already has? The Bible claims to be such a guide and records the Joshua 1:8 promise in many places. But can an ancient religious text answer complex questions for living in the twenty-first century?

In Prosperous and Successful, author David Janaro explains how to use the Bible to guide you to success in every area of life. Drawing from his counseling experience and modern psychology, he builds the case that the Bible has timeless insight into the human experience. He includes specific chapters on how the Bible leads to success in relationships, sex, work and money, prayer, joy, and suffering.

“By using practical applications and illustrations, Pastor David affords readers the means to grow in their faith. I wholeheartedly recommend this book.”
—Dr. Tommy Kelly, former president of the South Carolina Baptist Convention

“Pastor David is a compassionate counselor and pastor who desires to help the body of Christ know where they can find the answers to their needs, and then gives them the tools to do so.”
—Dr. John Lehman, author and biblical counselor.

David Janaro earned a doctor of ministry degree from New Orleans Baptist Theological Seminary. He is the pastor of Fairfax First Baptist Church in South Carolina and a certified counselor (Association of Certified Biblical Counselors) who has counseled a wide range of people—from prisoners at the Allendale Correctional Institution to local pastors. Janaro hosts the radio program “Trust the Bible.”