A Story of Love, Faith and the American Dream

by Miguel Salazar & With Richard Hogue 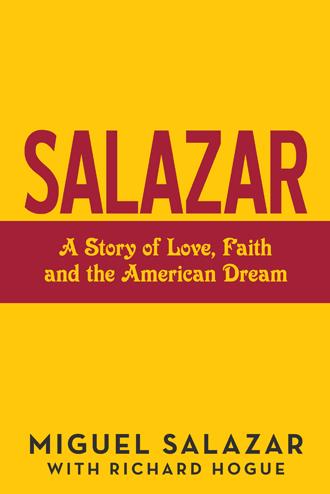 The story of Miguel and Elva Salazar begins in the abject poverty of the small Mexican town of Nava and winds its way through a series of remarkable events that ultimately lead to great success. Miguel was the fourth child of ten siblings who grew up sleeping on dirt floors under the grass roof of their small house and awoke with spider bites most mornings. There was little money, little food and no opportunity to continue in school beyond the sixth grade, but there was great love and affirmation.

Miguel’s parents, Arturo and Maria Pura Salazar, poured their lives into their children. Maria Pura was the rock and motivator of Miguel’s early life. She was always there, always loving and always caring. In order to provide as much money as he could for his precious wife and ten children, Arturo crossed the Rio Grande to work for ten months each year. The two months Miguel’s Papa was home was the high point of the year. During those two months, Miguel saw the great love his parents had for one another that prepared him to one day truly love his wife.

Miguel was an extremely intelligent child who excelled in math. His great desire was to finish high school, but because of the poverty of his family, he was forced to leave school and go to work. Miguel was no stranger to hard work. When he entered the fifth grade, Miguel left home to go to work in Piedras Negras, Mexico. Since that time, there has never been a day that he did not have a job.

He returned to Nava, following the sixth grade. One morning in what was an almost miraculous occurrence, Miguel saw the young girl who would become the single love of his life. Elva Garcia walked by and forever changed his life.

Elva was a young Mexican-American girl who was born and reared in a family of ten in the Texas border town of Eagle Pass. From the moment he saw her and ultimately found her, Miguel and Elva were a couple. What they experienced meeting one another, falling in love and building their life is a remarkable story. The details are amazing.

They begin with nothing but love. Then they worked their way through the harsh, laborious work in the cucumber fields and turkey processing plants of Colorado while Elva was pregnant and gave birth to their first child, a beautiful daughter named Brandy. From there they traveled to San Antonio where Miguel first worked as part of a roofing crew.

San Antonio was very good to them. It was there they bought their first home, had their two sons, Michael and Eric, and experienced their first taste of financial security. San Antonio was also where they almost lost their marriage because of alcohol, and ultimately made the greatest decision of their life by both of them becoming Christians. Then their life took another important turn. They moved to Oklahoma City where they formed Salazar Roofing and Construction.

Ultimately, the life of Miguel and Elva Salazar is the story of two very young people who meet, fall deeply in love and become committed Christians. It is the story of how this couple, through a remarkable series of events, was able to walk out of the misery of the poverty into which they were both born, and build personal, family and financial success that has surpassed their greatest dreams.

God specializes in making remarkable ‘trophies of grace’ out of the lives of individuals who are often viewed as the most unlikely to succeed.

The story of Miguel and Elva Salazar begins in the abject poverty of the small Mexican town of Nava. Together, they work their way through the harsh, grueling labor in the cucumber fields and turkey processing plants of Colorado. It is the story of how this couple, through a remarkable series of events become committed Christians and are able to walk out of the misery of the poverty into which they were both born, and build personal, family and financial success that has surpassed their greatest dreams.

Miguel Salazar is a man who came from abject poverty and has built a major company helping thousands of families recover following the damage from thunderstorms and hurricanes. His story is challenging and inspirational.