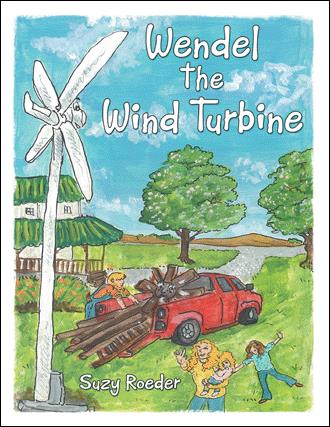 Wendel the wind turbine felt a steady breeze on his face and a soft buzz of energy as his long blades turned for the first time. A tickly feeling traveled down through the wires inside his pole to a metal box below where a person in a construction hat tightened some bolts.
Nearby, another worker was taking down an old wood and metal windmill that stood over a tall circle of stacked fieldstones. Old “Woody” had pumped water from the old farm well for many years. Wendel was a new, smaller wind turbine. He would generate electricity to pump water from the well and to power the family farm.
The children of the family watched from the farmhouse window. They were the ones who had named Woody. They loved him and were a little sad as he was being taken down. The oldest comforted her little sister. She told her that Woody was going to a museum, and that they could visit him there. They would love their new wind turbine just as much as they had loved Woody.

Wendel the Wind Turbine introduces young readers to the concept of wind energy and electricity. More profoundly, the little turbine encourages a healthy view of self, of differences in each other, and of the dignity we can celebrate in the unique gifts each of us brings to the world.

Suzy Roeder is a mother of ten children and grandmother of four. She grew up on a cattle farm in Maryland. She raised her own family on a horse and dairy farm in the Midwest, where she imagined a wind turbine like Wendel. Suzy now lives with her husband and family in Kansas.

Marie Wiedefeld grew up on a farm in Kansas, writing and drawing every day of her childhood, through college and to the present. Her ancestors were much like the family in Wendel the Wind Turbine, having settled on a farm in Illinois in the 1800s. Marie lives in Missouri with two dogs, two cats, two dairy goats and a flock of chickens.