THE RISE of a Man, a Mountain, a Nation

David, A Man Raised on High; a Novel 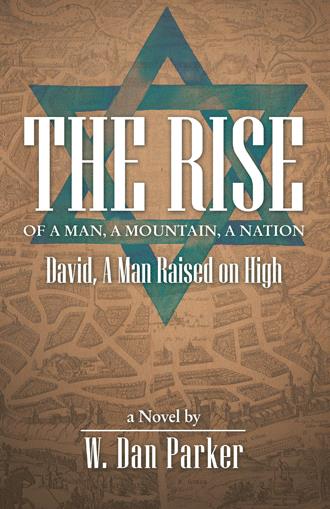 A Bible-based novel, The Rise charts how God raised up a caring shepherd boy David from a dysfunctional Bethlehem family to become a giant killing warrior, leader, psalm writer, and Israel’s greatest king. Readers of fiction, history and biblical novels will love his daring adventures and life-changing encounter with God on a mount called the Rise. Learn from David’s fascination with the Rise why Jerusalem is special, then and now. This good-read faithfully follows the Bible narrative, expanding real-life-stories about poet-musician David’s life in ancient Israel reflected by Parker’s biblical knowledge and imagination. Both exciting and inspirational, David’s heroic triumph over Goliath precedes years of despair and dangerous flight from paranoid King Saul. Experience great miracles of God, revealing history lessons, and faith-stretching trials of this talented and devoted “man after the heart of God.” Grow your faith as David trusts the LORD in dangerous scenes, truly repents his dreadful sins, and inspires by his psalms. Be intrigued by his unique parentage, faithful mother, and relationship with men like Joab and his 600 Mighty Men. Can his disgraceful tryst with Bathsheba be pardoned or anger with God over the ark’s tragedy be pacified? Answers and more are abundant in The Rise.

Dr. Dan Parker, pastor and seminary professor over a half-century, offers valuable biblical truths with keen understanding of biblical history. Preaching and seminary teaching aids his understanding of Bible characters, their times, and relating the message to you today. An international church, mission experiences in Russia, Belarus and India give him awareness of other cultures. You’re at home in ancient Israel with David’s many adventures, aided by Dan’s family-man experiences with wife, four children and six grandchildren, all active in Christian service. This history buff relates to believers and non-believers. His three books are called, “page-turners” and “learning experiences.”