A Tale of Conflict and Peace at the B Bar Ranch 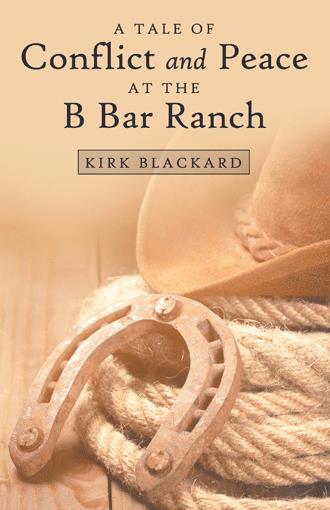 The appointed day was cool, clear, and just blustery enough to dry the previous night’s light rain from the little remaining grass. A few shriveled Persimmons, but almost no leaves, remained on the trees. The stock pond was filled with grey, opaque water covered by small ripples across most of the surface. A couple of animals arrived early to clean the area, mainly using their mouths to pick up dead limbs that had fallen from the trees and place them in a pile away from where the animals would be eating.
Most of the animals began arriving around eleven o’clock with their favorite food. The equines brought ground alfalfa and oats covered with molasses, and also several sugar cubes they took from the tack room where Mr. B had left them. The cows brought mostly hay, but also a couple of bags of compounded grain pellets they had been hording. (Lucifer didn’t arrive until shortly after noon. Said he was just too busy to be on time.) The chickens, surprisingly, showed up and brought smaller grain pellets of their own, along with several worms they had pecked from the ground in the pen around the henhouse. Elvira and her pigs brought a bucket of corn and two buckets of a slop comprised of wheat shorts and water. They had filched a couple of big, over-ripe watermelons remaining in a patch on the ranch next door, which they rolled in with their snouts.
Nipper arrived last, schlepping a large platter filled with sandwiches comprised of scrambled eggs and thick slabs of fried Spam between lightly toasted white bread: ingredients he had scrounged from Mr. B’s empty house and the chicken pen. Reaction to word of Nipper’s contribution was mixed, to say the least. Many of the animals saw the sandwiches as an interesting new cuisine they were willing to try. Most of the younger animals were totally befuddled, as they couldn’t imagine eating unsolicited e-mail messages in a sandwich. The chickens were ambivalent—chagrined to learn that Nipper was the cause of their mysteriously disappearing eggs, but on the other hand pleased that their eggs were to provide food for the pot-luck. Elvira wasn’t ambivalent. When she saw Nipper and his load, her red face turned white, her eyes became even larger, her heart started racing. If pigs could sweat, she would have been drenched. All she could think about was Nipper’s description of pot luck: “Just bring the food you like to eat.” Seeing the Spam, which she knew was just a fancy presentation of pork in a can, called to mind her great-great-great grandmother’s stories of hog-killing day on the ranch, and struck fear in her heart. Nipper’s sandwiches called for a contribution from the chickens. They called for commitment from the hogs.
Elvira didn’t say anything. She just rounded up her pigs, by then obliviously rooting in the shallow water at the edge of the stock pond, and they all beat it back to the pigpen. Most of the other animals hardly noticed them leave. Those that did assumed Elvira had her feelings hurt and was angry about something inconsequential. They continued visiting without asking what had happened.
Elvira’s first thought was to deal with Nipper’s fearsome behavior by just keeping her distance. She could refuse to consider that he might not understand what he had done, and attribute evil motives to his bringing the Spam. Communication with Nipper would be limited or non-existent, and she and her pigs could live their lives away from him and everything he represented. This, after all, seemed entirely consistent with the instructions in the ROOLES to assume you understand others’ actions and motives, and with what BM said was the clear biblical message that we should not keep company with those who behave in dubious ways.
But the whole situation was troubling to Elvira. When BM had begun pushing his “clear” answers from the Bible, particularly his desire to disengage from Madonna because of her behavior, she had obtained a copy from the school library and begun to read it. She was struck by passages such as Matthew 5:44 that said, “Love your enemies and pray for those who persecute you,” and the story of Jesus forgiving a “woman of the city” in Luke 7, and Matthew 25 that says, “whatever you did for one of the least of these brothers and sisters of mine, you did for me.”
How could these ideas possibly apply to a fat pig with red skin who is worried about a dog whose favorite food is comprised of thick slices of fried pork? Things didn’t seem as clear as BM claimed they were. And if things like loving your enemies, forgiving, and doing for the least of these were the way to go, how on earth should she go about them? And what if she exhibited them and Nipper continued to prefer Spam? How could she get Nipper to change his behavior? Would it be possible to get the other animals to change?
The celebration went reasonably well, although problems arose in addition to the one involving Nipper and Elvira. Dolly and Bubba did not attend. Dolly assumed Lucifer would be there, and she was careful to protect Bubba from his taunts and herself from his criticism and attempts to control her. Madonna showed up late for a token appearance, and made an obvious effort to stay away from BM and his expected lectures about her lifestyle. Several small groups spent time gossiping about Madonna and her behavior. Fuzzy seemed out of sorts, engaged in a couple of arguments with others where he flung some profanity, and spent more time with the chickens than with the other equine. Waffles was unusually quiet and left early, deciding to go hang out with Dolly. Others assumed she was either sick, depressed, or angry, but couldn’t decide which.

After Mr. and Mrs. B leave everything they have ever known and purchase a ranch on a worn-out cotton farm in Texas, they have great hope for a life of peace. But the relationship between the ranch’s menagerie of animals is anything but peaceful, and Mr. B worries continuously about how he can stop the conflict. He finally turns everything over to the animals in the hope they will work together to make the B-Bar Ranch a success.

The resident animals—cows, equines, pigs, chickens, and a big semi-trained cow dog—are thinking, talking creatures that see themselves and others as objects or farm animals and often demonstrate the worst characteristics of people in conflict. But when a sheep mysteriously appears and teaches them to regard one another like human beings who know God; have their own special hopes, needs, cares, and fears; and can choose to act of their own volition, they begin to realize peace on earth—and the ranch.

This tale for all ages demonstrates that when people regard themselves and others as human beings, rather than objects or animals, they move from conflict toward shalom in their lives.

Kirk Blackard earned a bachelor of arts degree in economics from Texas A&M University and a doctor of jurisprudence degree from the University of Texas School of Law. A former executive with Shell Oil Company and author of nine other books, Kirk also has experience as a mediator, arbitrator, and chairman of a restorative justice ministry. He and his wife, Marcia, have two sons, five grandchildren, and live in Houston.