A.I.M. for High Ground: The Adventure in Ministry

True Stories of Leadership in Crisis and in Joy 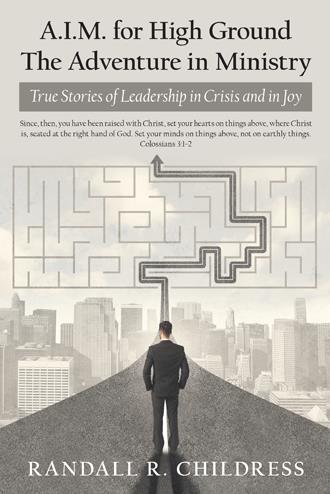 When we turned onto our street, a van covered with satanic graffiti was ominously parked in front of the house. My shock quickly turned to anger. “Why on earth would anyone park that in front of the parsonage?” Our sons in the back seat sat up wide-eyed to see what I was upset about.

“That’s terrible. Who would drive something like that?” Sandi muttered.

The black van with red and yellow artwork featured swastikas, pitchforks, and horned goats. A large inverted red pentagram was flaunted on both sides, confirming both the van and the driver were advertising bad news.

Along with my anger was a tinge of embarrassment. The parsonage is located on a quiet street behind the church building and next to a public elementary school. The school grounds were always busy, even on weekends. Everyone using the school’s basketball courts or ball field would have seen the van parked in front of the parsonage. This vehicle did not convey the image I was trying to set for the community.

As we pulled into the driveway, I noticed there were two women sitting in the front seats of the van. A young woman on the passenger side exited the van holding a baby. I sent my wife and children into the house and walked toward the road to meet her.

“Are you the minister of this church?” she asked.

“Yes, I’m Randy Childress.” I looked back at the woman still in the van. “What can I do for you?”

“I hope you can help me,” she said. “I don’t know what to do. I’ve been evicted, and I don’t have anywhere to go. I don’t have any money, and I only have a little formula for the baby. Can you help?”

“How did you happen to come here?” Our church building is located in a community off the main road. Normally, vagrants would travel up and down a busy highway visiting those church buildings, but she would have had to intentionally come to Kempsville.

“I was afraid. I didn’t know what to do,” she pointed to her right, “so I just was walking through the drug store at the intersection to stay in air conditioning. Then I just broke down and started crying. That’s when Sam approached me.” She nodded to the other woman in the van.

The woman sitting on the driver’s side was a watching us very closely with a cheeky smirk on her face. I’m not sure, but I felt she was watching me in particular. She couldn’t hear what Melanie and I were saying, but it was as if she knew nonetheless. Her stare was intimidating.

“That’s Sam. Her real name is Samantha, but she goes by Sam. Sam offered to take me to her home, but I’m afraid to go with her. She’s a Satanist, and she told me if I went to her place there would be others there and they would try to recruit me. I asked her to bring me here first.”

“Here?” I didn’t recognize her, but it was possible she could have attended one of our worship services here.

“Have you attended here before?”

“No, but I met another lady, before Sam, who is a member of the church. When I told her the trouble I was in and that I didn’t know where to turn, she told me this church helped the homeless.”

I sighed. Actually, it was more of a huff. I was exhausted from the day at the beach, sunburned, and frustrated with the interruption to my schedule. I wanted to rest, clean up, and start studying my sermon for the next morning.

“Look,” I said, “we do help people on occasion, but we have a committee who does this. Come back tomorrow morning and I’ll introduce you to them.”

Her face and shoulders dropped at the same time.

At that moment, Sam opened the door and stepped out of the van. She had an imposing stature and the appearance of someone who had “been there and done that,” someone who had done it all. She didn’t need to wait for Melanie to tell her my answer; she could read it in Melanie’s expression. And she couldn’t wait to taunt me.

Close to six feet tall, she was a big woman. Stout, but not fat. Probably has six brothers who’re wrestlers, I thought. She had a very short spiked haircut and was wearing dirty jeans and an oversized plaid shirt with the sleeves cut out. Tattoo sleeves with satanic images went up both arms and protruded from the collar of her shirt. . . and she was grinning. “I told her you wouldn’t do anything,” she gloated.

“You what?” I wear hearing aids and sometimes don’t hear correctly, but that wasn’t the case here. I was just thickheaded.

“I said, I told her you wouldn’t do anything!”

They say your whole life passes before you when you die. I don’t know about that, but I now know what happens at the point of genuine conviction . . . your guilt clobbers you in the head. In that moment I forgot where we were, what we were talking about, and to whom I was talking. My mind careened out of my control. I couldn’t think about the schoolyard or the neighbors or the church or anything . . . other than what just happened. It was like watching a TV program when the camera zooms in on a particular subject and everything else blurs out. Stunned, I was speechless for maybe the first time in my life.

While I was still processing it all, Sam leaned in and snapped her fingers in front of my eyes.

The Christian life is a life of adventure. Never knowing where God will take you or what experiences He will put you through, the challenge is to stay on high ground.

A.I.M. for High Ground is a collection of one pastor’s true stories of Christian leadership in crisis and in joy. These stories relate experiences you don’t ordinarily receive in Bible College. As you read each story you will be impressed that God still does remarkable things and brings remarkable people into your life resulting in remarkable lessons learned.

Randall R. Childress has served in four churches over forty-five years of full-time ministry. He recently retired after thirty years as Senior Minister at Kempsville Christian Church in Virginia Beach, VA. During his ministry he has received “Outstanding Young Men in America” recognition; opened the General Assembly of Virginia with prayer, led four tours to Israel, traveled to Greece and Egypt, serviced five building programs and performed over one hundred weddings. He and his wife, Sandra, live in Virginia Beach and still participate in Kempsville Christian Church where their son is now the Senior Minister.