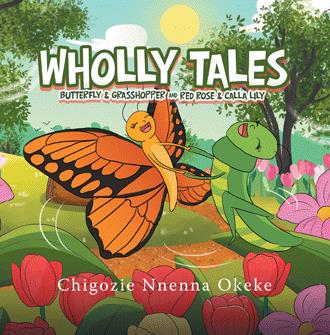 Red Rose & Calla Lily
"Aaah!! What a pleasure!” exclaimed the Calla Lily. The Red Rose responded, "No, you don't get it, and in fact, that is the problem.” “What is the problem,” asked the Calla Lily? The Red Rose tries to explain, “The problem is I don't want to be nourished by the same source as the rest of the other flowers. Don't you see it, Calla Lily, we are better than they are and we should see ourselves separate from them. We are superior!”
"Oh, stop," said the Calla Lilly. “I refuse to believe this notion of you and I are better than the other ones. I will stay here and be nourished by them, the same sunlight, same water from the stream, and the same soil with assorted worms. Yeah!”

Butterfly & Grasshopper
With such delight, the butterfly said to the grasshopper, "Did you hear that?" Then the butterfly flapping her wings in continuous motion joyfully and very delighted saying to herself, "I am beautiful. I am very beautiful!" The grasshopper responded and said, "Eeeh eeh Yea. Of course, you are," feeling out of place since she received no compliment from the rabbit. Her countenance was saddened. “Huh,” she sighed.

Wholly Tales: Butterfly & Grasshopper and Red Rose & Calla Lily are the first in the Wholly Tales series. Butterfly & Grasshopper are two friends who fly out to the field of green grass on a sunny day to admire the color and beauty of spring season. They only learn that they were part of the beauty of this field. It is inspired by Psalm 139:14, “All creatures of God, unique in their individual nature yet are wonderfully made.” This story teaches kids that they are beautiful no matter how they look, with each kid wonderfully made by the loving God.

Red Rose & Calla Lily is a story inspired by Proverbs 16:18, “Pride goes before destruction.” It is the story of two friends who had a disagreement because Red Rose got up one day with pride in her heart. She decided she wants to leave the garden full of other flowers and go up to a mountain where she can stand out by herself, being the preferred flower for many festive occasions. Despite every effort to persuade her by the much meeker friend Calla Lily, she insisted. What happened next is a lesson to teach kids of the imminent dangers of pride.

Chigozie Nnenna Okeke’s deep love for children began at an early age of 7. She was born to Nigerian parents and is the first child among four siblings. Being the oldest, she was raised early to be a leader and example for her younger siblings. In the course of time and as a result of her upbringing, she developed a strong passion for caring for other children with selflessness and genuine love. She is a wife, mother of two delightful children and had worked as a Sunday school teacher in her local church training and mentoring kids.