But Sir, I Have Holes In My Shoes 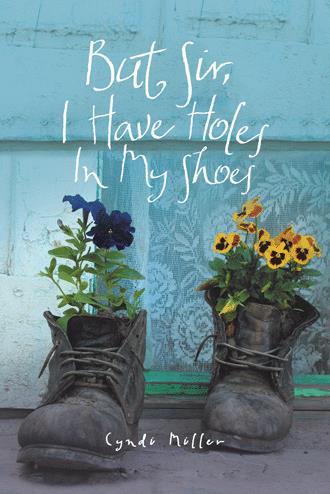 The rooms were old and a bit rundown, but to Em it was like being in a palace. Once she was finished eating she took a long hot shower. Feeling refreshed and relaxed, she turned on the TV for background noise and went into the bathroom to wash her clothes with the complimentary bar of soap. She thought to take her clothes to the laundry room located next to the ice machine, but she just couldn’t bring herself to do it. This simple act always brought back the terrible memories of the night her mother was shot and killed. She had never set foot in a laundromat since. As a young teen she always wondered why they chose to rob a place with coin-operated machines, but as she got older she realized it wasn’t a robbery at all. It was a drug deal gone bad. Em always looked for the silver lining in life. Being steered clear of drugs due to her mother’s untimely death was the biggest silver lining she could find in the sky as far as she was concerned.
All she really remembered of that evening was seeing a gun being pulled and running out the door as fast as she could when it went off. She hid behind a wall and waited for her mom to come find her; instead all she heard were other people’s voices calling out her name. She decided to find her own way home and slept in the shed that night, expecting her mom to be there in the morning. She sat in that shed for three days before she overheard one of the detectives telling the story of her mom to their neighbor. She learned that she had no other living relatives to take her in and would be put up for adoption if they ever found her. Em had no idea what that meant but she heard enough to know that she didn’t want it. She stayed in that shed for a long time before someone held an estate sale at the house, forcing her to run away again.
She sometimes thought to look for her dad, but without an ID that was nearly impossible. This was actually okay with Em though. The way she figured it was, he wasn’t in her life as a baby and child, so he probably wouldn’t have wanted anything to do with her even if she had found him. So, instead of chasing a ghost she decided to hold on to the happy memories she had of her mom and leave well enough alone.
Ironically, a lot of her happy memories took place in that same laundromat. She and her mother would go there about once a week. Her mother would let her put the quarters in the little slots but what she really wanted to do was put the soap in the machines. Her mom, however, wouldn’t let her because she said Em would spill most of the soap on the floor.
She would always say the same thing: “Em, Mommy doesn’t make enough money to buy soap to clean the floor with. Maybe when you are older we can revisit this, but for now that’s my job.” Em would start crying and the man who worked there would come up to her with a tissue.
He would say, “Here, little one, dry those tears up. I need your help.” He would make space between the clothes sitting on top of the large light green folding tables and sit her up next to a pile where Em would attempt to help fold them. She loved it so much that she didn’t even care that he would go behind her and redo her work. She really liked the man a lot. She couldn’t remember his name, but she did remember his big bright smile and kind eyes.
Her mother would always say, “Em, see how his eyes are full of light? That is what Jesus’s eyes look like! That’s how others know he is God’s child.” Thinking of this, she could almost hear her mother saying, “Always make sure your eyes are full of light, my love. That is how others will know you too are God’s child.”
Once Em was finished, she hung her tattered blue jeans and torn-up t-shirt over the shower rod. She made her way to the door to double-check it was locked. Turning off the TV she settled in for the night. Em was barely able to get the last word of her prayer out before she was sound asleep. Sleeping straight through the night, she didn’t even hear the ruckus of a party going on two doors down. She didn’t even wake up at the crack of dawn as usual. She woke up happy and refreshed. Because of the money the man had given her, she wasn’t worried about losing her spot at that prime location. She decided to stay in bed and watch TV. She was excited to find that the Hallmark Channel was showing a marathon of The Andy Griffith Show. This had been one of her mother’s favorite shows. As she watched Barney Fife, the goofy deputy, make a fool of himself, she could hear her mom’s laugh again.

In a parallel comparison between God’s pursuit of broken people and a humble businessman’s aim to help a homeless girl stand on her own two feet, this short novel takes the reader into the lives of two completely different societal classes and melds them together in the most unusual way.

Having served as a missionary in the Philippines, Mexico, South Sudan, and here in the United States; author Cyndi Miller combines her experiences and those of whom she served and worked among to create vivid stories to tell the world of their life’s journeys, hardships and victories. Having overcome her own struggles with childhood poverty, learning disabilities, poor eyesight and pursuit of faith, hope and love; she writes with passion and conviction. Cyndi’s ultimate hope is to lead people to a deeper understanding and appreciation of her Lord and Savior, Jesus Christ, through her literary work.