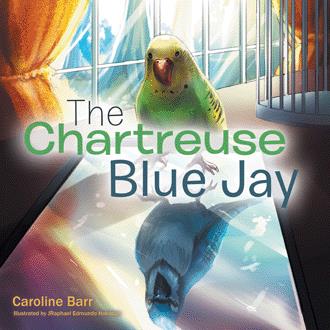 "My favorite bird of all is the blue jay," declared Munchie to himself, while admiring its brilliant blue wings against a stark, white breast, its bold ego, and its unmistakable bravery. It appeared to Munchie that the blue jays were not afraid of anything. They obviously had appointed themselves leaders of all backyard feathered beings, orchestrating each bird's trip to the window feeder by screeching a jeering "jaay, jaay" if anyone flew out of turn.

"Oh, I wish I were a blue jay," Munchie longingly chirruped out loud, startling himself. He wanted his feathers to be that spectacular color like theirs, wanted to have the freedom to fly anywhere he desired like they did; to be looked up to by all of the other birds. Yes, blue jays were indeed so beautiful, so self-assured, and so respected.

Absolutely, he decided. He wanted to be a blue jay.

Right then, he jumped on his swing, puffed out his chest with pride, and ruffled his parakeet feathers confidently, pretending them to be sky blue instead of lime green, jaay-jaaying with all of his little heart. And just for a fleeting moment, he imagined how perfect it would be if he got his wish.

Munchie is a mischievous but lovable chartreuse parakeet who lives with red-haired “Grandmommie,” as her grandchildren call her. Munchie has spent his life inside as a pet, but one special day, he gets to go out on the patio while Grandmommie gardens. There, he becomes more enamored with the majestic blue jay.

The blue jay is Munchie’s favorite bird. He loves their brilliant blue wings and stark, white breast. Blue jays are unmistakably brave, are scared of nothing, and appear to have appointed themselves leaders of the backyard birds. Yes, Munchie wants to be just like a blue jay. He dreams of joining their ranks and flying free from Grandmommie’s back porch.

When his dream of freedom comes true, though, things aren’t quite as wonderful as Munchie imagined. He causes Grandmommie great worry and finds unforseen danger at every turn. However, during his grand adventure, Munchie also learns a very important lesson about God’s plan for him and about the love of a best friend.

Caroline Barr was born and raised in Western Kentucky and earned a B.S.W. at the University of Kentucky. After serving several years in the fields of social work and Christian ministry, a desire to make Jesus known through children’s books was placed in her heart. She is a wife, mother, and grandmother currently living in Florida.