FROM PRISON TO PEACE:

by Mary A. Faher 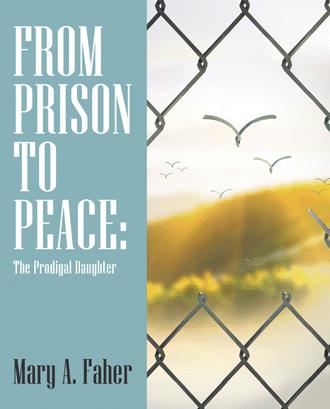 Sitting in the back of a Berrien County Sheriff’s Department SUV, with my eyes closed trying to block out what is happening to me. I was aware of the sun shining in between the clouds, just like in the movies, the sky is fast forwarding bringing me closer to my destination, my “home” for the next 23 months to 10 years, all depending on my good behavior.

I was “riding out” with a woman from a town close to my own. She told me this wasn’t her “first rodeo”, that she was a (PV) parole violator, having caught a new case. My mind was reeling trying to grasp the prison lingo. She was going on about what I should expect once we got there. I was trying to pay attention, but my racing mind wouldn’t focus. My brain had been shutting down ever since I was sentenced and housed in the County jail until MDOC (Michigan Department of Corrections) was ready for me. After a while it just became noise and I tuned it out. I knew that she had meant well, but I hadn’t asked for it and all I really wanted was silence. The two officers in the front seat, in front of the iron grid were quiet, speaking sporadically and I could hear the murmur of the radio. There wasn’t anything that anyone could have said to me that would have prepared me for what I was going to encounter.

As the ride brought me closer to the destination, my hands were numb because the manacles were too tight. They were attached to a waist chain causing further restriction of movement, resulting in pain and stiffness. I just closed my eyes trying to block out the fear and the anger I felt because of betrayal. Betrayed by the corporation that I had worked with and believed in and with the entire legal system.

I felt the slowing down of the vehicle and heard the clicking of the turn signal, announcing that our arrival was coming sooner that I thought. It appeared that we were in a residential area with the houses sparsely spaced and then, there it was…the sign welcoming us to Women’s Huron Valley Correctional Facility in Ypsilanti, MI. I had never been to Ypsilanti and God willing, would never again after serving my sentence.

As we turned into the drive, the sun was shining brightly in the cloudless sky. I found myself squinting and the barbed wire and fence were shining like diamonds, like snow on a cold bright winter’s morning. The fence was on both sides of the driveway and enveloped the entire compound. I felt sick to my stomach, like I needed to vomit. It wasn’t the height or the length of the fence, it was the coiled barbed wire that was on top of the fence and also the coils at ground level lining the fence. It felt surreal to me as if I were part of a prison movie. This was REAL, this was my reality and there wasn’t anything I could do about it. I felt so alone, abandoned and in the direct control of MDOC, their property and as such, theirs to control, direct, bend or break, at their will. My mother said there were going to be days like this, but I am sure she never imagined this for her daughter. One thing I was grateful for was the fact that she was not alive to see this, it would have broken her heart.

I have always been head strong and rebellious, and the rebel in me was telling myself “They can control my body, but they will never control my mind or soul.” I had always taken pride in being a free spirit, doing it my way.”

The SUV stopped in what looked like a gravel parking lot, on closer look, it had been paved at one time, however, there were holes and chunks of asphalt all around, giving it the appearance of a junk yard. It was obvious that maintaining the drive had not been a priority. I looked around and saw other vans were there before us, so we were going to have to wait our turn. I could feel my chest tighten, my breathing was becoming more rapid and I was really shutting down. When that happens my eyesight and hearing are affected. It is as if my body is shielding me from sensory overload. From somewhere I heard, “Just breathe, one step at a time and one day at a time.” I knew it was God, my Lord, who I trusted above all others. I knew that He wouldn’t forsake me.

I was sentenced to twenty-three months to ten years in Michigan’s only state prison for women, and I would not change a thing about my time behind the barbed wires. I am blessed that God, my Father, loved me enough to sit me down, correct me, and lead me to the foot of the cross. Being born-again and having been adopted into God’s family, I have a new direction and purpose for my life. It has changed me and my life forever. Above all and most importantly, I now know that our Lord Jesus Christ has always been with me and loves me unconditionally. I now live in the peace that only can come from Jesus Christ.

FROM PRISON TO PEACE: The Prodigal Daughter is an account of the author’s journey of survival in prison to being born-again and living with the peace that only Jesus Christ can give. The first half of the book was written while she was in prison, with the second half being written after her release. Ms. Faher currently resides on the east coast of Florida with her dog Buddha and cat Tia, enjoying her life of freedom and living in truth, light, joy, love and peace.