Short Stories for Sportsmen on the GO! 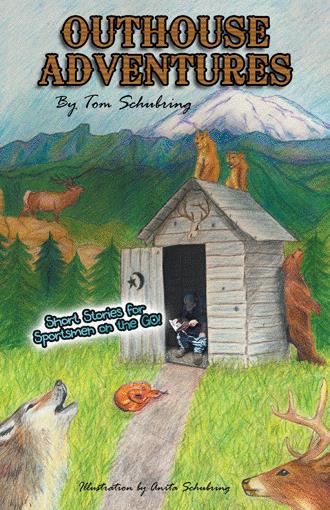 It was September in Montana, and it was miserably hot. I had placed my blind near a cattle tank that was surrounded by elk tracks and rubs. My expectations started to soar as I could hear a herd coming in to drink. The herd turned out to be a herd of cattle. While some drank, others sniffed at my blind. Some would snort or bellow at me. One old cow even stuck her head right in the blind’s window. When she spooked, she made a hasty retreat, attempting to take the blind with her.

After they finally left, my hopes again began to lift as the area began to quiet down. I could hear something approaching from the west. This something turned out to be an old Ford pickup. It came complete with a crusty old cowboy checking the tank’s water level.

I could only laugh as the cowboy started doing this weird, head-bob thing as he stared at my blind. Apparently satisfied it wasn’t placed there by aliens, he continued on his mission as he bounced off across the prairie. It was almost dark, and my fun-o-meter was nowhere near pegged.

Dark blinds will absorb the sun’s heat, and on a sunny mid-nineties day, they are sweltering inside. I had long since emptied both my Nalgenes, and I was seriously getting dehydrated. I had stripped down to my boxers hours ago in an attempt to stay cool. It was time to call it a day as darkness closed in.

Dressed in shorts and tennis shoes, I trekked off toward the truck in the dark as I fantasized about quenching my thirst. My blind was packed up neatly and strapped to my back. With my bow in one hand and my bucket in the other, I headed off.

I couldn’t imagine the stars ever being brighter as I crossed the prairie on that two track road. My fantasies about the water in the truck were suddenly interrupted by a deafening rattle. In mid stride I hit reverse so fast I almost dropped my transmission. With my heart in my throat, I leaped backwards about ten yards! I fumbled frantically in my fanny pack for my headlamp. With the trail now fully illuminated, I proceeded back down it. There in front of me was a three-foot prairie rattler. I could see where I hit reverse, and I realized I was only inches away from stepping on him. Hmmm? Now what should I do?

Last year I had brought my sons home a horned toad. The last thing Mark asked me before I left this year was to bring him home a rattlesnake. I was holding in my left hand a five-gallon pail complete with a snap-on lid. If I brought my kids home a live rattlesnake, I would undoubtedly get the coolest dad ever award.

As I pondered the image of me on stage, receiving such a grand award, another image popped into my head—this one was of my very angry wife. My wife does not like snakes! And I was pretty certain she would not approve of such a spectacular gift for my boys. I weighed out all the arguments for the greatest dad award versus the bone-headed father/husband award. I also took into consideration all the pros and cons of capturing a live rattlesnake. Sadly, better judgment won out. His tail would have to suffice.

Grizzly and black bears charge! Wolf attacks and rattlesnakes! Come and join me as I share some of my adventures and misadventures from over forty years of bowhunting in North America. I wrote Outhouse Adventures with sportsmen on the go in mind! My time is limited, and since reading requires valuable time spent sitting around, I wanted to write a book that was restroom friendly so you can kill two birds with one stone!

Each chapter brings you along on a different adventure and is intended to help you relax, laugh, dream, and think and may even challenge you. At times, my sanity may come into question and you may ask yourself, Is he for real? I guess you’ll have to read and decide for yourself!

Tom has been an avid bowhunter since he was 12 and his favorite way to hunt is by calling game. Tom has successfully called in hundreds of whitetails, as well as elk, moose, bears, turkeys and wolves. He has been happily married to his wife Darla since 1986. They have raised 3 son's and look forward to grandchildren. Tom and Darla currently live in the mountains of West Virginia after spending most of their lives in Wisconsin.

Tom's passion for the outdoors ranks second only to his passion for the Lord. Tom worked as a missionary and pastor for 20 years and now annually shares his experiences at a variety of camps, churches, Game feeds and outdoor shows. If you’re interested in having Tom share at your event, please contact Screaming Bull Ministries at: ScreamingBullMinistries@gmail.com.