Billionaire I Am Single; I Am One

Paradigm-Shifting Perspective from the King’s Son 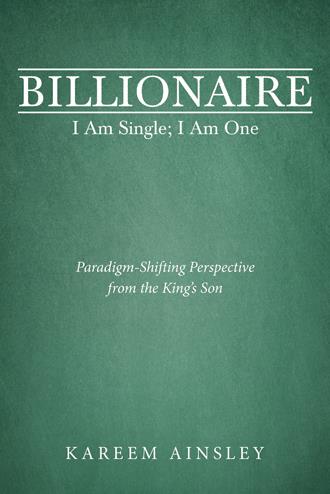 Humans have been entrusted with singleness. Each individual is packaged with the end at the beginning. Embracing, unpacking, maximizing, and optimizing this fact will guide us in unveiling wholeness, oneness, and completion as a single individual. This transformative insight is built from the architectural constitution framework, which will guide in the examination and exploration of the blueprint. It is expected that a structure built on these foundations will be impenetrable, providing that there are no breaches. While you are being guided in the process of determining your purpose, a celestial transcendence will occur as scales are removed from your eyes, allowing you to visualize your true reflection in the true mirror.

A systematic and principled approach to becoming the person you are intended to be and not being the person someone else desires you to become will be engaged. This will allow the actual work execution and allow the individual to function as initially designed. The work that will be done in development will prepare you not only for a job but also for the work intended. It will prepare you not only for skill employment but also for skill deployment and sharing of the gifting which is developed as it is your gift that makes room for you.

Your birth was your introduction into this system in which, if not timely understood, you will be trapped in a time loop, dampening your potential as you remain stuck in the revolving servitude door until you become no more. Nothing in the system functions the way it is purported to function, and everything has a tendency not to do what is expected. It may seem like chaos, but it is organized in that manner to drain your energy while keeping you distracted from reality as you are lured towards the occult orchestral fantasy. In embracing your freedom, you, it must be noted, cannot be simultaneously free and ignorant; so you must choose. Ecclesiastes 11:6 tells us, “In the morning sow thy seed, and in the evening withhold not thine hand: for thou knowest not whether shall prosper, either this or that, or whether they both shall be alike good. The time has come for the eyes to be open, allowing that which is within to become.”

The process is commensurate with social engineering, bombarding you with propaganda and separating you from your identity while presenting the idea that you are someone you were not created to be. The system will try to impose who you are, what you should become, where you are going, and how you should live in between, creating massive dependence and simultaneously altering your thinking inclination. If you should conceive in the thought, you will be able to put the pieces together, but they will not allow such.

The social construct surrounding education is a tool that has been weaponized and has been converted into miseducation in an effort to impede human beings and misdirect them away from their intended focus, making them slaves to error. The slow learner who fails to grasp the miseducation concepts is provided the special education system, uniquely designed and constructed to create mass destruction, annihilation, demonizing unorthodox thinking, and revolutionary behaviour. When the sabotage methodology does not work in accordance with the plan or is proven to be in error, it is referred to as an academic miscalculation. This is similar to a research team presenting claims which are proven unfounded and irreproducible, but to retain the institution’s prestige the gaffe is considered academic miscalculation, even though the information can be deemed to have been intended to utilize misdirection while clouding truth from the innocent.

In keeping with the objective, you are kept sedated with lullabies. Quietly and gently, you are kept asleep, allowing mystification to penetrate. When you do decide to awake from that slumber, you are confronted with the pretentious social media override, flooding your system with a social dopamine validation feedback loop, modifying the norms of interaction. Created are tools which rip apart the natural societal fabric and present a programmed state of pretentiously and innocuously passing the time your intellectual independence is surrendered, making your psychological vulnerability subject to exploitation. As the loop continues, there is a numbing of rationality as inhibitions are mind-jacked.

People naturally tend to support that in which they are interested, and it has been proven that most people don’t want to hear the truth, as they are more comfortable in believing fictions presented as fact and not actual fact. With this overwhelming information bombardment, and with underdeveloped filters, the mind is allowed to operate automatically without constraints, finding comfort in clicking, liking, texting, sharing, and engaging in impulsive actions without calculating the repercussions, which eventually leads to an individual’s demise without any taking of responsibility or aiding in the rescue.

Multiple individuals’ minds have been hijacked by the surreptitiously subjoined reality interlocking with fantasy with the delusive intent to give over control. In fact, these victims become the marionettes subjected to the subconscious direction. Mechanistically in the modern era, chauvinism has blinded the actions imposed by separatism, promoting habitual inferiority and activating a self-destructive time bomb in the name of commercialism, which encourages cooperate cannibalism. The process is designed to insinuate that you are inadequate and that a new item will resolve your problem. This is where scepticism must step in for a while, allowing cynicism prominence, as you are more than the projection.

Amidst the unwelcome offerings, the world presents mental castration, physical massacre, and soul mutilation. Preparation is critical for the best navigation as growth and development occur. In growing, you must be willing to reject the wrong exhibited with boorishness assassination, incongruity calibration, prioritization rearrangement, critical thinking, and embracement of innovation while developing and exercising competence that indicates growth. People who don’t grow are unwilling to dissociate from that which has become their accepted dysfunctional normal in knowledge and practice.

The lucid expressions which you will be privileged to enjoy, are uniquely designed on the most fundamental rudimentary foundations that will aid in your transformation and freedom from the imposed mental limitations. It was uniquely constructed for the individual who wants to understand the expectations required to becoming one in mind, body and soul.

Intended, is the provocation of taught that will shift your paradigm from being comfortable with just surviving, as you develop the attributes which will allow you to strive and when executed in balance you will enjoy the fruits of pure thriving. No individual can be simultaneously free and ignorant; so, you must choose. As your state of consciousness increases, you will become open to frequencies which will allow you to reach your prestige proclivity. The scales from your eyes will be lifted, causing a shifting in your perception, opening the doors of freedom; facilitating active thinking and information assimilation, forming practical results while living the life deserved.

During this revelatory journey, your potential will be unleashed as within our creation there is the embedding of great power and authority given. You will be positioned to explore the reservoir to become the person you were created to be. The exploratory terrain during the development will focus on the origin, sustenance, virtue, kingdom concepts, relationships, leadership, sexuality, purpose, health, success, financial abundance and love, all amalgamating in producing the whole. You were meant to be wealthy. So, change the way you perceive things because when the way you look at things changes, the things you invest focus, also changes. The billionaire inside you deserves a chance at life. Let us give it life; live full. You will say goodbye to your old self as you are introduced to your real self while we explore “Billionaire, I am One.”

Kareem Ainsley has been endowed with phenomenal intellectual acumens of philosophy and visionary projections under the leadership of the Holy Spirit, which has embodied him with wisdom and the spirit of leadership. Under this authority, he has been privileged to sit and counsel with kings, leaders and world changers in policy development and sustainable executions. His specialized expertise in the area of Medical-Clinical-Health Consultation in which is extraordinary skills in human interaction has made him a renowned relationship and life coach expert. Because of his passion towards the young he has been developing the next generation of citizens who are being positioned to develop the world and extract the greatness from within themselves and others. It is the author’s intention that you journey with him and follow the guide as you become one with yourself, as you deserve to be wealthy. It is time; remind yourself: “Billionaire, I am One”