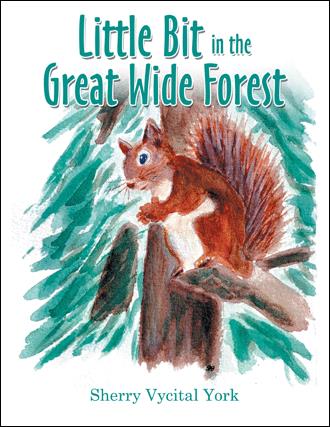 Sitting on an old worn out stump the tiny squirrel looked about, wondering. Just a speck in the Great Wide Forest was he, a tiny ball of fluff with a bushy tail, his reddish-brown coat blending in with the fallen leaves on the forest floor. He was surrounded by giant trees, spruce, red-cedar, fir and pine, that had been growing there for hundreds of years. He was just a little tiny bit in a vast wilderness.

The sun filtered gently down through the canopy of autumn leaves that still hung and shimmered on gnarled tree limbs. Quaking aspen here and there brought music to his ears on a gentle breeze. He sat and listened as the air rustled through the trees, his imagination still and open, waiting for what it would hear. The chattering of other squirrels in the grove of trees down by the river caught his attention, and the cooing of mourning doves in the trees above him sang his favorite morning song. It was a beautiful, cool morning in his forest, and Little Bit could hardly contain the joy he felt rising up in his tiny breast . . . for the utter peacefulness and stillness that surrounded him. Usually a busy one, in a hurry to hunt and gather nuts and pine cones for the coming winter, he was enjoying this special time to pause and think, just to look and listen, enjoy and be thankful.

His world was so big and beautiful! He had explored much of the forest, but it kept going on and on, forever it seemed. Of course, there were dangers here and there, but mostly there was peace and beauty, and the unending work of hunting and gathering food every day. He and his family had a nice cozy home in one of the old spruce trees, a deep hole, soft and dry, warm and safe from intruders. The hole was big enough for all of them to curl up together to sleep, and to store lots of food for winter. A perfect spot high in the tree.

As Little Bit sat listening to the river and sounds of forest life waking up, suddenly he heard laughter and footsteps coming his way! Humans! Wondering still, he made a dash up his tree to watch from on high. What were they doing in his forest? Soon a group came into view, some older ones, and several younger, walking along the game trail that ran right under his tree. The older ones were pointing here and there and talking about the forest as they walked merrily along. Each carried a pail in hand and soon came to a stop near berry bushes close by. He could still watch them from his perch above as they gathered huckleberries, one by one. “I guess humans gather food for winter, too,” thought Little Bit. “And have families.” And from the happiness he saw on their faces and the joy he heard in their voices, Little Bit thought humans must like his forest as well.

“Oh look!” shouted one of the young humans. “Look at that tiny squirrel up there in the tree!” All of a sudden Little Bit froze as all the humans’ eyes rested on him. He wasn’t quite sure what to do, him way up high and them down below. But they could see him. Should he run? Stay still? His heart beat rapidly in his chest as he hung on tightly to the branch. His tail swished once, then twice, all on its own! “Oh, goodness,” thought Little Bit. “I didn’t mean to move. My tail must be nervous!” No sooner had he thought those thoughts than the humans turned and went back to picking berries. And soon they moved farther down the game trail, away from him, to another berry patch. “Whew!” thought Little Bit. “That was close. I’m glad those are peaceful humans that came to visit my forest today! I don’t mind sharing this big forest with them.” So Little Bit swished his tail some more, this time on purpose, and started his day hunting and gathering nuts. Later in the evening he told his family all he had experienced that morning in the forest. And in a house in town, a family eating huckleberry pie talked of their morning adventure in the woods, and of seeing a tiny squirrel they decided they would call “Little Bit”.

Little Bit has much to learn navigating the trials of growing up. Through the constant love and teaching of his parents, he weathers the conflicts of selfishness, bullying, irritating new neighbors, and even getting lost. Learning patience, service, sharing, lessons in manners, and experiencing the great joy of forgiveness, Little Bit and his forest friends discover the value of listening to and practicing their parents’ wise instructions.

Sherry York is an R.N. with a B.A. in Anthropology and a B.S. in Nursing. Recently retired after forty years of nursing, she and her husband of over forty years have been blessed with four adult children and seven grandchildren. Inheriting the joy of writing from her mother Ann (Gigi to the grands), she delights in the creative adventures of writing and watercolor.