Becoming the Man God Wants You to Be 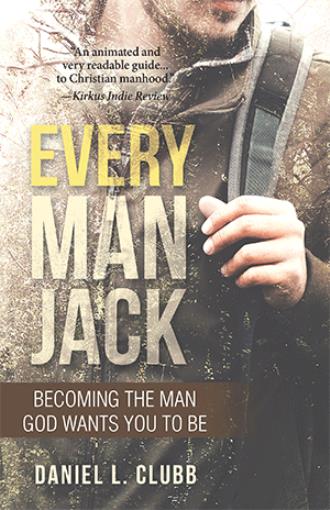 For every person born into this world, finding your place and embracing your gender always begins with where you uniquely fit into your family of origin. Family is where we first begin to understand our places as men (or women) and learn how to develop and operate within the dynamics of our God-given sexuality.

I was the only boy in my family and grew up with four sisters. I loved my sisters, but they were all very girlie. As a young boy, and especially as a teenager, I felt like I was drowning in a sea of estrogen. But I survived. I can honestly say I enjoyed being raised with my four feminine siblings. That was due in part to the fact that, as the second child of five, I had significant childhood leverage. To add to my filial advantage, I was very close to my mom. She got me. She intuitively understood me. The fact that my mom entered her marriage hoping for five boys helped, too. I plead guilty to my sisters’ accusation of being Mom’s favorite. But despite my favorite son status, I was wonderfully blessed with the ability to relate well to the women in my young world.

Connecting with my father was a very different story. Our relationship was, at best, a strained one. It was socially awkward. My dad reveled in his relationship with his daughters, but he had a very tough time relating to me. Our father-son connections were hard fought.

Being born into a family with nine siblings, my father’s birth order placed him between his six sisters – three older and three younger. Two of his three brothers were a dozen or more years older than him, out of the house and on their own just a few years after he was born. Knowing this, I have always suspected that my dad’s placement in his family’s birth order contributed to his female relational bias in family matters. And he wasn’t alone. My uncle William (my dad’s youngest brother affectionately known as Billy Clubb) once told me when I turned thirteen he was amazed I hadn’t grown up to be a sissy. I had to come to terms early on with the fact that my dad’s side of the family was not going to be forthcoming with words of affirmation toward the men in our clan.

So, as you might suspect, the road to manhood for me was not filled with many attaboy moments from my dad. My path to manhood was a bumpy one. There were some painful life lessons to learn (all by myself) along the way.

I chose to write Every Man Jack because I wanted to remind myself of what I’ve learned about becoming a man over the past six decades. As I said, it has not been an easy road for me. But I did become a man. And I got help from some authentic, God-fearing men along the way. Writing this book is my way of returning the favor.

A word about the title I’ve chosen for this book. If you’re unfamiliar with the street slang adaptation of the word Jack, it’s a reference to a well-loved man. The Urban Dictionary describes a Jack as invariably trustworthy, the first person you would talk to about anything. It further identifies a “Jack” as a kind, compassionate and caring man who is very insightful, with an honest nature whose heart is always well intended. A Jack is the kind of man that embraces his manhood, always trying to be the best example of his gender.

I love that usage of the word “Jack.” What man wouldn’t want those qualities characterizing his life? I do. I see it as an apt moniker for a spiritually healthy and emotionally intelligent man.

Philosopher and theologian Dallas Willard observed: “Most problems in contemporary churches can be explained by the fact that members have not yet decided to follow Christ.” There is a discipleship crisis among men in the church today. Jesus’s model of discipling men is being ignored. This book is about deciding as a man to follow Jesus Christ. I want to enable men to swim upstream against “easy-believeism” and what too often passes for discipleship in the church today. My prayer is that Every Man Jack will motivate you to follow Jesus Christ as a man and to become His disciple. I want to help you become the man God wants you to be.

If you’re a Gen Xer or a millennial, this book is especially for you. Spiritual discipleship principles don’t change, because they’re eternal. They may get repackaged every thirty or forty years, but the principles they embody remain the same. Dr. Howard Hendricks of Dallas Seminary used to say, “Methods are many. Principles are few. Methods come and go. Principles never do.” What you read in this book you may consider to be old school spiritual discipleship principles. And you will be right. But as you read, keep in mind that you cannot improve on the timeless biblical principles they reflect.

The Apostle Paul wrote, “Be watchful, stand firm in the faith, act like men, be strong. Let all that you do be done in love” (1 Cor. 16:13–14 English Standard Version). For Paul three things were required to act like a man: (1) be watchful and alert; (2) be faithful and strong; and (3) be loving always. Every Man Jack will unpack these requirements for you. It will lay the groundwork for you to be equipped to consistently live out your faith in God as a man.

Taking my cue from the Apostle Paul, reinforced by life experience, and my passion to see men discover what it means to be a man, this book is divided into three sections, each designed to help you become a Jack. Every Man Jack will guide you on the path to being watchful and alert (your private, inner and public spiritual life); being loving always (loving yourself and those closest to you); and being faithful and strong (understanding biblical justice and living it out in your life).

Real men give God control of their private, inner, and public spiritual life by making prayer, personal Bible study, and fellowship a priority in their life. Prayer is the way we stay connected with God. Hearing, reading, studying, memorizing, meditating on, and personally applying the truths of the Bible to life will carry a man deep into discipleship territory. And a real man isn’t afraid of connecting with other men for mutual support and accountability. It’s called fellowship, and it can profoundly change your life and the ones you influence. Real men are also men of godly character – the integrity of your life and the wholeness of spirit that God develops in you.

Learning to love those closest to them and keeping their relationships in right order must be a high priority for any man who wants to be Jack. Loving yourself and then expressing and demonstrating love to your wife (or future wife), your children, and your friends is the desire of a real man of God. He loves consistently.

Being faithful and strong requires doing justice in an unjust world. Discovering what the Bible says justice is and is not and that God is just are vital to learning to be Jack. It will help you make critical life decisions about how you can be faithful and strong in a world full of injustice.

Casey Stengel, a Major League Baseball right fielder and coach, was best known as the colorful manager of both the championship New York Yankees of the 1950s and, later, of the expansion New York Mets. He was also known for his quotable quips. One of my favorites is: “There comes a time in every man’s life, and I’ve had plenty of them.” My prayer is that reading this book and heeding its message will be one of those defining times in your life. So, read on if you want to embark on a journey into a deeper spiritual life, become a decisive and positive influence in your world, and discover how to join the ranks of Every Man Jack.

Being “Jack” is a reference to a well-loved man, invariably trustworthy, the first person you would talk to about anything. To be “Jack” is to be kind, compassionate, and caring. A “Jack” is insightful, honest, and well intended-the kind of man who embraces his manhood, always trying to be the best example of his gender.

There is a discipleship crisis in the American church. Jesus’ model of discipling men is being ignored. Every Man Jack addresses this urgent need.

The Apostle Paul wrote, “Be watchful, stand firm in the faith, act like men, be strong. Let all that you do be done in love” (1 Corinthians 16:13-14-ESV). Every Man Jack unpacks these qualities, equipping you to live your faith in God – as a man.

Every Man Jack will guide you on the path to…

Loving yourself and those closest to you

Understanding biblical justice, living it out in your daily life

If you want to become a more decisive and positive influence in your world, this book is for you. Join the ranks of Every Man Jack.

DANIEL L. CLUBB has been a pastor, church planter, and university professor for four decades in the Greater San Francisco Bay Area. He taught as an adjunct professor at William Jessup University for 16 years.

Now retired after 40 years in full-time ministry, he is currently adjunct professor of hermeneutics, bible, and theology at Williamson College in Franklin, Tennessee.

Daniel and his wife Valerie live in the suburbs of Nashville, Tennessee. They have three married children and eight grandchildren – seven girls and one boy.